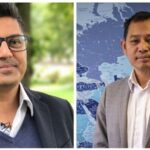 Ro Nay San Lwin and Maung Zarni tell Al Jazeera they fear for their lives but will not be ‘silenced’ by online abuse.

As a “campaign of rape, killings and arson” proceeds, anti-Rohingya forces hail the election of Trump.

18 Feb 2015 – The country’s Rohingya minority is one of the most persecuted groups in the world. Burmese activists and leaders such as Suu Kyi must stand up for the human rights of the Rohingya community.