Ro Nay San Lwin and Maung Zarni tell Al Jazeera they fear for their lives but will not be ‘silenced’ by online abuse. 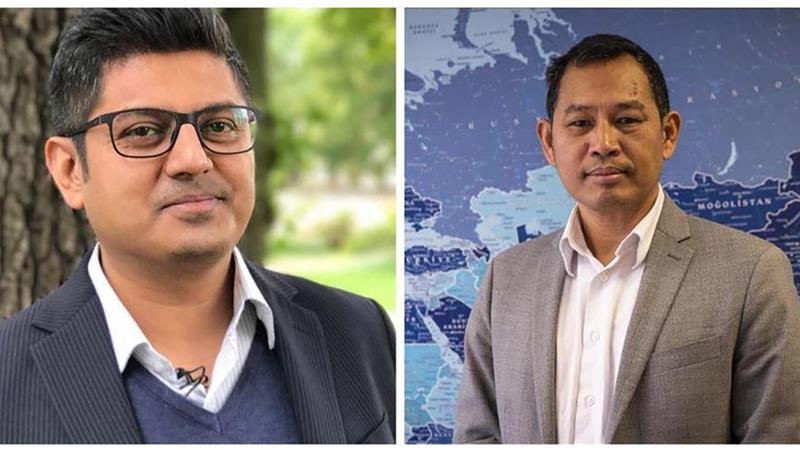 Lwin, left, and Zarni have been in exile outside Myanmar for the past 18 and 30 years respectively.  [DW News/Anadolu]

6 Dec 2019 – Two prominent Rohingya campaigners say they are facing increased online abuse, including death threats, for their work, with the latest warning coming from the grandson of former Myanmar ruler Ne Win who called for their abduction.

Ro Nay San Lwin, a prominent Rohingya activist based in Germany, and Maung Zarni, an academic living in exile in the United Kingdom, have told Al Jazeera that they fear for their lives but will not be “silenced” by the online harassment.

Lwin, 42, and Zarni, 56, have been fiercely critical of the Myanmar government’s persecution of the mainly Muslim Rohingya community over the past seven years, irking many in Myanmar’s government and its supporters.

Ne Win, one of Myanmar’s most well-known entrepreneurs, has demanded that the activists be abducted and brought back to Myanmar in a video interview posted on YouTube.

Win told local media outlet AkonThi that it was “high time” the Myanmar military launched an “Israeli-style kidnap operation” against the exiled activists – similar to the capture of Nazi leader Adolf Eichmann in Argentina.

“These creatures should not dare to come to our country. They scream foul from abroad but they need to be tried here [In Myanmar],” Win said in the interview.

Lwin and Zarni said they had alerted authorities in Germany and the UK respectively about the latest threats.

“I shouldn’t take this threat lightly. I am very much concerned,” said Lwin, adding that, while he had been receiving threats since 2016, largely from ordinary people, this was different because Win still had strong ties with the country’s government, military and intelligence services.

On why the prominent businessman would specifically target them, Zarni – who is a Buddhist – told Al Jazeera he had “provided the first-comprehensive study of Rohingya persecution using Lemkin’s genocide framework, and have helped maintain the genocide argument through  international conferences in 7 years”.

“If your anti-genocide activism is sustained and effective, you get singled out … our activism naturally angers Myanmar genocidaires,” Zarni said.

Lwin said that he had received online messages insinuating he should be assassinated in a manner similar to the late Ko Ni – a prominent Myanmar lawyer who had criticised the country’s nationality law, which rendered the Rohingya stateless.

“They called me a master of fake news, traitor and all the swear words they can use,” Lwin, cofounder and coordinator of the Free Rohingya Coalition (FRC), told Al Jazeera.

Zarni told Al Jazeera he had been accused of receiving millions of dollars from the Organisation of Islamic Cooperation (OIC).

During a teaching stint in Malaysia in 2013, Zarni said he was informed by the Special Branch (SB), the intelligence arm of the country’s police, that he was the target of a possible attack by a group of individuals with links to the embassy of Myanmar in Kuala Lumpur, forcing him to move to a safe house.

“I would not go anywhere without texting the SB,” said Zarni, who is also associated with the FRC.

Nevertheless, Zarni and Lwin have stood firm and continue unapologetically in their campaign to highlight the suffering of the Rohingya people.

Myanmar’s government at the ICJ

The Myanmar government has come under intense criticism from human rights groups for stifling dissent in recent years and over its treatment of Rohingya people.

In September last year, two Reuters journalists were sentenced to seven years in prison for investigating the massacre of nearly a dozen Muslim Rohingya men by Myanmar security forces and Buddhist civilians in Rakhine state during a military operation in August 2017.

Wa Lone and Kyaw Soe Oo were released in May this year under a presidential amnesty following an international outcry.

Zarni said the threats against him and Lwin needed to be taken in the context of the International Court of Justice (ICJ) case on the Myanmar state’s role in the persecution and illegal killing of Myanmar’s Rohingya community in August 2017, set to begin this month in The Hague.

The lawsuit was lodged by The Gambia, a Muslim-majority West African nation, after garnering support from the OIC.

Myanmar has denied the charges and said its crackdown was in response to an armed attack by Rohingya rebels.

Nobel Peace Prize laureate Aung San Suu Kyi, Myanmar’s de facto ruler who has been criticised for her silence on the Rohingya issue, will lead the country’s legal defence team at the ICJ. The hearings will commence on December 10. 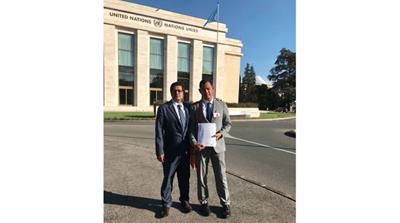 Lwin, left, and Zarni at the UN in Geneva at the launch of the International Independent Fact-Finding Mission for Myanmar in September 2018.  [Ro Nay San Lwin/Al Jazeera]

“The specific threats against Maung Zarni and Nay San Lwin are dangerous not just to the personal security of these men and their families,” Katherine Southwick, international legal expert and visiting scholar at George Mason University’s School for Conflict Analysis and Resolution, told Al Jazeera.

“These threats also create a climate of fear and intimidation against any individual or non-governmental group that might call for, support, or cooperate with justice efforts like the ICJ case,” she added.

Southwick said attempts to intimidate the activists could undermine the search for “accountability and justice that is so clearly needed in Myanmar”.

Lwin will also be attending the hearing at The Hague.

“This hearing is the first ever. It is historic. We have been victims of genocide for more than 40 years. This is first time at international court,” Lwin noted.

“I’m concerned for my safety but I can’t skip.”