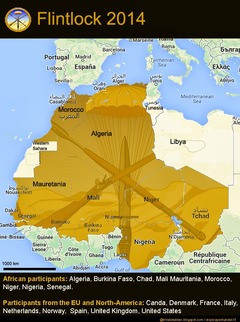 The exercises, known as Operation Flintlock 2015, are to serve as the spearhead for a comprehensive military escalation by the US and European powers and their client regimes throughout the resource-rich Lake Chad Basin. The war simulations will focus on “interoperability and capacity-building among African, Western and US counterterrorism forces,” according to a Pentagon press release.

Flintlock is being overseen by the Pentagon’s Africa Command (AFRICOM) and US Special Operations Command (SOCOM) Africa. It will be centered on military bases in Chad, Niger, Nigeria, Cameroon and Tunisia, according to Stars and Stripes.

More than 1,000 elite troops affiliated with the Joint-Special Operations Task Force-Trans Sahara, including some 670 African, 365 NATO and 255 US commandos will simulate a spectrum of possible military operations, according to the Pentagon. The US plans to outfit African forces with new military equipment as part of the elaborate drills and maneuvers. 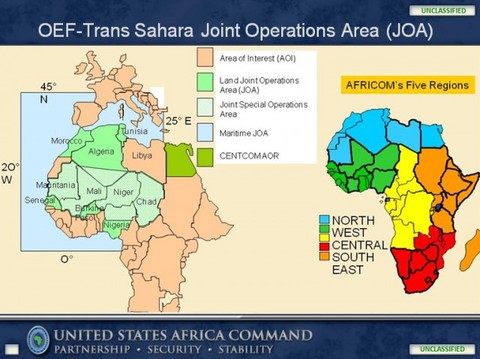 Statements from US and African military leaders make clear that the war simulations could transition to actual fighting against Boko Haram and other forces at any time. Asked about possible clashes between participating forces and Boko Haram, Special Operations Command Africa representative Bardha Azari said, “Our troops are fully prepared to handle everything.”

“Nothing is being ruled out or ruled in. These discussions are really just starting,” US Rear Admiral Kirby similarly commented Friday in response to questions about new US troop deployments to Nigeria and surrounding countries.

The launch of massive US-led war games in West Africa comes just days after Nigerian president Goodluck Jonathan called for US troop deployments to Nigeria, home to the second largest proven oil reserves in all of Africa, after Libya.

Jonathan said the US should send forces to aid his government in its campaign against militant group Boko Haram, which Jonathan claimed has received weapons and aid from ISIS.

“Are they not fighting ISIS? Why can’t they come to Nigeria?” Jonathan said. “If Nigeria has a problem, then I expect the US to come and assist us.”

The main opposition candidate campaigning against Jonathan for the presidency, Nigerian general and former military dictator Muhammadu Buhari, enjoys support from the Chicago-based AKPD political consulting firm, which is headed by Obama administration insider David Axelrod. The Obama administration has likely green-lighted support for Buhari in an effort to apply strategic pressure against the Jonathan administration, which has supported measures opening the way for new Chinese investment in Nigeria.

Flintlock’s pre-positioning of forces throughout Western Africa is bound up with broader efforts by the US and NATO to effect a sweeping reorganization and integration of imperialist-aligned military forces throughout the continent.

In coordination with the imperialist powers, the African Union (AU) is preparing to deploy a Multi-National Joint Task Force (MNJTF) of some 8,700 troops to countries in and around the Lake Chad basin, under the pretext of fighting Boko Haram and other unnamed extremist groups. Leaders of Cameroon, Chad, Congo, Equatorial Guinea and Gabon met in the Cameroonian capital at Yaounde Monday to make arrangements for initial deployments of the MNJTF.

The Obama administration’s National Security Strategy 2015 cites the AU as the main US-friendly institution in Africa, and calls for the US to “strengthen the operational capacity of regional organizations like the African Union (AU) and broaden the ranks of capable troop-contributing countries.”

The document adds, “Ongoing conflicts in Sudan, South Sudan, the Democratic Republic of the Congo, and the Central African Republic, as well as violent extremists fighting governments in Somalia, Nigeria, and across the Sahel, all pose threats to innocent civilians, regional stability, and our national security.”

These moves mark a major escalation of the already substantial US military presence in West and Central Africa and the Sahel.

US AFRICOM established a secret air base near the capital of Burkina Faso at Ouagadougou as early as 2012, which has served as the launching pad for regular air missions over Mali, Mauratania and other Saharan and sub-Saharan countries.

US and Britain deployed counterterrorism units to Nigeria in May 2014, supposedly to aid in the search for victims of a mass abduction by Boko Haram. The US Marine Corps acknowledged in late 2014 that it has constructed new “staging outposts” and “cooperative security locations” in Ghana, Senegal and Gabon.

As part of a propaganda campaign to justify a panoply of new US military interventions globally, the most recent moves in West Africa are presented as a struggle against “Islamic extremism.”

“Nigeria is Africa’s most populous country, its largest economy. It’s the motor of a continent that we acknowledge is increasingly important strategically and economically for the world,” said J. Peter Pham, Africa head at the Atlantic Council.

“And it’s held hostage by a murderous gang of violent extremists, who are growing increasingly more and more virulent,” Pham said.

In reality, the militarization of West Africa is aimed at securing US control over the vast energy and other natural resources of the region and countering the growth of Chinese influence on the continent. China has major economic interests in mining and petroleum sectors throughout Central and West Africa and the Sahel.

The strategists and think tanks of the American ruling class have predicted for years that West Africa would become the most crucial source of petroleum outside of the top OPEC producers. Already at the time of AFRICOM’s founding in 2008, the US imported some 1 million barrels of oil per day from Nigeria. US corporations account for largest share of foreign direct investment in Nigeria, mostly in petroleum and mining. Nigeria’s National Petroleum Corporation (NNPC) works closely with US and European transnationals, including Chevron, Total, Agip, ConocoPhillips and ExxonMobil.

The Chad Basin area has some 2.3 billion barrels of oil and more than 14 trillion cubic feet of natural gas, according to statistics compiled by the US Geological Survey.

Studies by the US Department of Energy (DoE) project that oil production across the continent will continue to rise sharply in the coming decade, achieving a nearly 100 percent increase in production during the first three decades of the twenty-first century. The US was already receiving some 24 percent of its oil imports from the continent as whole as of 2009.

The US ruling class has long envisioned the possibility of a large-scale US invasion of Nigeria, home to some 180 million people and the most important oil pipelines regionally. A US Army report on future occupations of global “megacities” specifically singled out Nigeria’s Lagos, home to some 20 million, for one of its two main case studies.