Where Does Iran’s Supreme Leader Really Stand on Nuclear Negotiations? 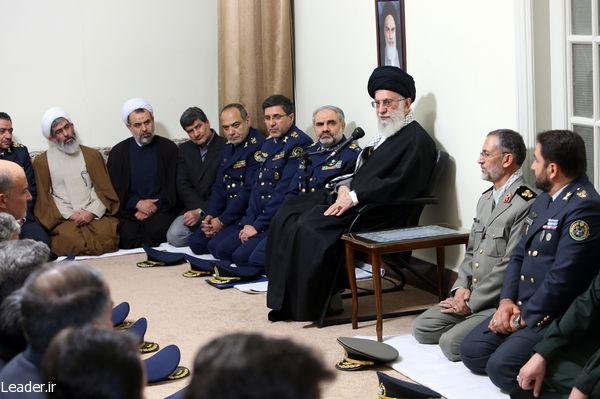 On February 8 [2015], in a speech to his country’s air force, Iran’s Supreme Leader Ayatollah Ali Khamenei made his latest public comments on the ongoing nuclear talks between Tehran and six world powers to limit its nuclear program in exchange for sanctions relief.

The essence of much of his address (link in Persian) didn’t differ from previous statements in which he had cautiously supported the negotiations. This time, though, his language was much closer to that used by US officials, particularly when he said that “not reaching a deal would be better than a bad deal.” Certainly, Washington and Tehran don’t define a “bad deal” similarly—and even in the United States, many speak of a “bad deal” without really defining it. Khamenei’s definition wasn’t much clearer. He said a bad deal would be “one that was against national interests, one that would lead to the great Iranian nation being undermined.”

So where does that leave observers trying to divine the future of the negotiations?

As supreme leader, Khamenei is the highest authority in the country, with the final say on all matters domestic and foreign. So his public statements get a lot of traction, and his views hold a special place in nuclear discussions. Because of the mystery surrounding his office, and the vague nature of many of his pronouncements, many analysts try to penetrate Khamenei’s deepest thoughts—but for the most part they have to extrapolate. Some take his fatwa (or decree) banning nuclear weapons, communicated to the International Atomic Energy Agency in 2005, at face value, while others interpret his statements to mean that he wants the bomb and won’t agree to anything less. According to many observers in the United States, Khamenei does want the bomb, but allows Foreign Minister Javad Zarif and his team to participate in the negotiations to get sanctions relief. Since it’s impossible to get inside the supreme leader’s head, no one can confirm what his intentions actually are, one way or the other. US intelligence reports aren’t much help either: They tell us that Tehran was pursuing a nuclear weapon until 2002, but it’s not clear whether a political decision to resume the program has been made since then.

The notion of supreme leadership (velayat-e faghih in Persian) entered the Iranian political scene with the 1979 Islamic Revolution, which replaced the country’s 2,500-year-old monarchic tradition. In the 1980s, the requirements for supreme leadership and the position’s authority changed to reflect the evolution of the regime.

In theory, the Islamic Republic is based on the principle of the separation of powers, with the executive, legislative, and judiciary branches playing the same roles they do in Western countries. But in reality, the supreme leader has some level of direct or indirect influence over virtually all branches of government. He has a circle of thousands of people who directly or indirectly work for him, including a security apparatus and advisors. This entourage is referred to as the “house of the guide,” or beyt-e rahbar.

Iranian politics is fairly dynamic, with various factions constantly challenging each other. But the supreme leader can often step into a conflict or conversation and change its course or put an end to it. A prime example occurred during the 2009 Green Movement, when millions of Iranians took to the streets to denounce the fraudulent re-election of President Mahmoud Ahmadinejad. During a nationally-broadcast Friday prayer address (link in Persian), Khamenei said that responsibility for the bloodshed and violence resulting from the protests belonged those who had “incited” the unrest. This terminated the legitimacy of the protest movement and gave law enforcement and paramilitary forces a green light to respond with force.

To be sure, the supreme leader’s views don’t always appear to hold sway. During the 2013 presidential elections, some observers claimed that hardliner Saeed Jalili was Khamenei’s favorite, leaving little chance that Hassan Rouhani would be elected, but in the end Rouhani won.

What we do know is that Khamenei has gone to great lengths to try to legitimize Iran’s “peaceful” nuclear energy program, articulating reasons his country would never seek nuclear weapons, and, since Rouhani’s election, backing the negotiators. Khamenei’s interventions serve several purposes and audiences. He unquestionably supports the nuclear energy program, saying that it’s the right of the Iranian nation to have access to nuclear energy, and framing much of the discussion in terms of scientific and technological progress. This stance is in keeping with the revolutionary narrative that Iran should be self-sufficient and develop indigenous technological capabilities.

Khamenei has also said that there is a religious ban on weapons of mass destruction. The scope of this prohibition remains unclear, as some of his statements point at a more comprehensive ban, including on the “production, stockpiling, and use” of such weapons, while others merely encompass their “use.”

Amid his supportive statements, the supreme leader has also set boundaries on the negotiating team, but most of his redlines are fairly vague and allow the team to maneuver. For example, Khamenei has said (link in Persian) that Iran should not and will not close down the underground uranium enrichment facility at Fordow, but he hasn’t specified what should be done with it. In other words, he might consider it permissible for the site to be converted into a research and development facility. Likewise, he has clearly stated that his country needs to eventually develop an industrial enrichment program to meet “practical” fuel supply needs, but he hasn’t said by when this goal should be achieved. This means that the negotiating team could strike a deal that lets Iran to keep a reasonable number of centrifuges, and the leeway that the supreme leader has allowed would make it possible to sell the agreement at home.

Despite what some Western observers believe, it’s implausible that Khamenei would refuse to agree to any final deal. It’s clear that the process wouldn’t be where it is currently without the backing of the highest authority in the country. And Khamenei’s public statements aren’t his only means of influence: Some members of the negotiating team, in particular Abbas Araghchi, are close to the supreme leader’s circle, and while the extent of communication isn’t clear, the fact that there is some level of coordination between Khamenei and Zarif’s team is certain.

While Khamenei had previously spoken of limits on the negotiating team’s leeway to make concessions, in the February 8 speech he did so using the same language as the United States and some of its allies, including that used by the Israeli government. He said, “I agree with a deal; but not with a bad deal. The Americans constantly repeat that ‘we believe that reaching no deal is better than a bad deal.’ Yes, we believe that too.”

The supreme leader proceeded to enumerate the steps Iran has taken to get closer to an agreement, as well as those it’s currently implementing under the interim deal. He endorsed all these efforts and said that Tehran has been acting “rationally,” while also reminding hardliners that the negotiating team stands its ground when the US-led six powers try to get too many concessions without making any in return. He again highlighted that he, like the Iranian people, will approve any deal that would allow it to preserve its “honor.” By first emphasizing that Zarif’s team has been acting in accordance with national interests, before stating that any agreement that does so would be acceptable to him and the people, he has in effect once again endorsed the negotiations while ensuring that the team will be able to sell a deal to doubters back home.

Finally, the supreme leader provided some guidelines for the negotiators. He noted that making a framework agreement without working out details would only pave the way for the other powers to ask for more concessions later in the process. Similarly, he asserted that any agreement should be completely “clear” and without room for “interpretation.” This, he argued, would take away any excuses for backtracking that the foreign powers might come up with later. This emphasis demonstrates Tehran’s frustration with some of the ongoing debate, in the United States especially, over whether Iran is complying with the interim deal, some which might have been avoided with more precision. The supreme leader’s speech, like his previous ones, also aimed to prepare the grounds for a potential failure of the negotiating process.

Khamenei is arguably the single most important voice on Iran’s nuclear program. Whether or not his declared aims match his actual wishes remains unclear. But his latest speech is yet another ringing endorsement of the Rouhani government’s nuclear policy. His support for Zarif’s negotiating team in particular is stronger than ever and comes at a time when, according to the team itself, the talks are at their most fragile and sensitive stage. That makes this moment a unique opportunity for Iranian negotiators to make a comprehensive deal they can sell to domestic hardliners, using the momentum provided by the country’s highest political authority.

Ariane Tabatabai is a visiting assistant professor in the Security Studies Program at the School of Foreign Service, Georgetown University.