Push Back the Doomsday Clock! 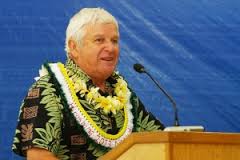 We Are All Down Winders!

Many people died in the Marshall Islands from radiation contamination and fallout downwind of the Bravo blast and the 66 additional U.S. nuclear weapon tests there. The Bravo test was 1000 times more powerful than the U.S. bomb that destroyed the city of Hiroshima, Japan. (You are cordially invited to attend: The Bravo Test Remembrance Worship Event, Monday, March 2, 2015, 6:30 – 8:30 PM at the Church of the Holy Cross 440 W. Lanikaula St., Hilo, Hawai`i – across from UHH new glass building.)

Today, we are all Down Winders. The mining and milling of uranium for making fuel for nuclear power plants and nuclear bombs, thousands of nuclear bombs tested worldwide, numerous nuclear accidents –Fukushima, Chernobyl, etc. and the widespread use of depleted uranium weapons in training and in war, have now made earth’s entire population DOWN WINDERS.

The 133,000-acre military Pohakuloa Training Area (PTA) located in the center of Hawai`i Island is known to be contaminated with radiation from Depleted Uranium (DU) used in weapons testing, as well as lead and other military toxins. PTA is located in a dry environment, adjacent to a Girl Scout Camp where continued bombing and military maneuvers, together with frequent high winds, risk spreading the contamination in small dust particles that can be transported around the island and beyond. Citizen monitors on numerous occasions have detected radiation in civilian areas beyond the confines of PTA boundaries.

PTA is also subject to flash flooding, which risks the introduction of military toxins into the ground water and toxins being flushed all the way down to the ocean, endangering humans, plants and animals. On July 2, 2008, the Hawai`i County Council, by a vote of 8-1, passed Resolution 639-08 calling for a halt to all live-fire at PTA and a clean up of Depleted Uranium radiation present at PTA. The U.S. military has ignored the Council’s call and continues to bomb Pohakuloa.

The land at Pohakuloa is Hawaiian Kingdom Crown and Government lands. It’s been used as a military bombing and training area since WWII. Over 84,000 -acres were simply seized through presidential executive order #11167 at no cost. Nearly 23,000-acres are leased by the Army from the State of Hawaii for 65 years at a total cost of $1.00. Overall, Hawai`i is the most heavily militarized group of islands in the world. The Bayonet Constitution and the Reciprocity Treaty of 1887 stationed the U.S. Navy at Pearl harbor, lead to the removal of Hawai`i’s Queen in 1893, and continued U.S. military occupation ever since.

2 Responses to “Push Back the Doomsday Clock!”