TPP, Peace and Conflict – It’s Not about Trade, It’s about How We Trade 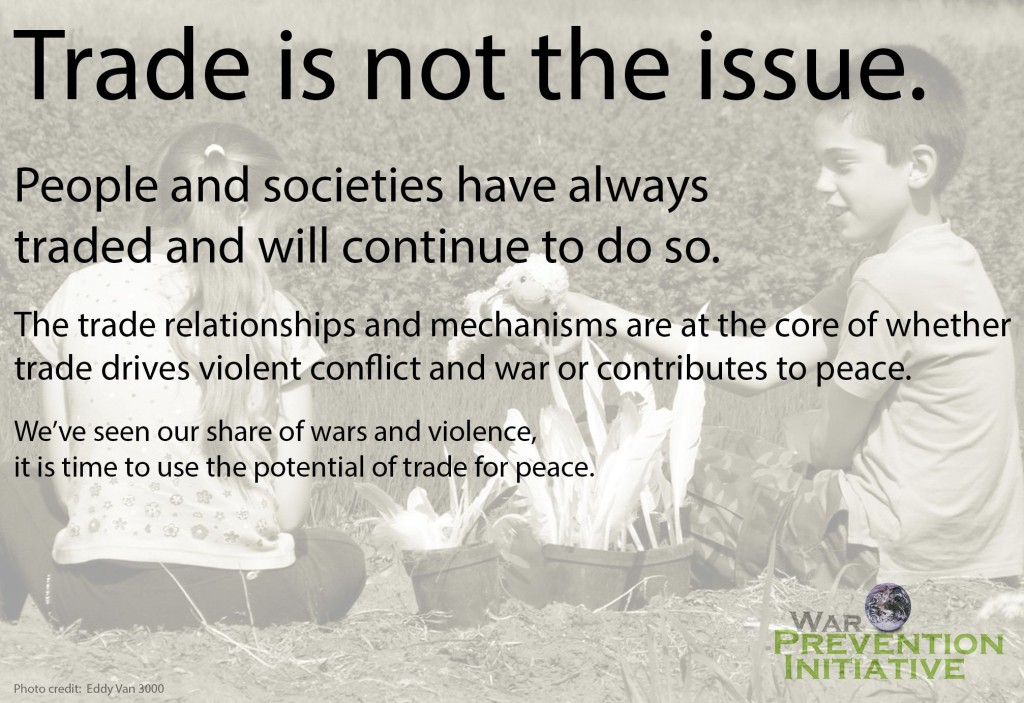 Let’s get one thing straight to begin with. Trade is good. We do it all the time. Trade has been pretty much part of recorded human history and evidence reveals prehistorical trade routes in many parts of the world. It becomes a little bit trickier when we look at large-scale international trade agreements. The question as to whether foreign trade promotes peace and development or destructive conflict has been debated for a long time. One of the most current controversies on free trade agreements evolves around the Trans Pacific Partnership (TPP). The history of free trade agreements, the secrecy around TPP, and the leaked information of the actual agreement suggest tremendous potential for social conflict if implemented.

Described by its promoters as a “next-generation model for addressing both new and traditional trade and investment issues, supporting the creation and retention of jobs and promoting economic development in our countries,” TPP is already facing broad resistance. There is sizeable opposition informing and educating about the negative consequences of what former Secretary of Labor Robert Reich calls “global corporate agreements.” The opposition to TPP transcends political party lines and goes beyond the traditional left. There is a social movement against TPP. Labor groups, public health groups, digital rights groups, the environmental movement, immigrant groups, and peace and justice groups, are only a few vocal opponents. Stated concerns are: offshoring of American jobs, income inequality, higher costs of medicine, free range of corporations but not people, unsafe food, and less local control to name a few. As a peace and conflict scientist, I can add another concern: destructive conflict.

When we look at conflicts, we look at why they happen to begin with – the root causes. A simple way is to look what our basic human needs are. We know air, water, food, clothing and shelter are needed for survival. Beyond those we can look at security, identity, well-being and self-determination. If those are not met, it is argued, then people engage in conflict. As currently practiced and implemented, free trade agreements contribute to structural violence – the violence where social structures and institutions prevent people from meeting their basic needs. The agreements protect the interests of elites over the vast majority of people and the planet; consequently, the potential for conflict is increased. Now it becomes a little clearer that the debated provisions of TPP can be linked directly to social conflict, unrest and instability: resource exploitation, labor rights and income inequality, agriculture, environmental issues and national, regional and local community democratic decision-making powers.

Trade and economies have the potential to lead to peace as well as violence and war. Peace through trade can become a realistic idea when connected to basic principles of a peacekeeping economy as outlined by political economist Lloyd Dumas. The principles are: (1) Establish balanced relationships – everyone gains benefit at least equal to their contribution and there is little incentive to disrupt the relationship; (2) Emphasize development – Most of the wars since WWII have been fought in developing countries. Poverty and missing opportunities are breeding grounds for violence. Development is an effective counter-terrorism strategy, as it weakens the support network for terrorist groups; (3) Minimize ecological stress – The competition for depleteable resources – most notably oil and increasingly water – generates dangerous conflicts between nations and groups within nations. It is proven that war is more likely to happen when there is oil. Using natural resources more efficiently, developing and using non-polluting technologies and procedures, and better not bigger economic growth can reduce ecological stress.

Peace and conflict studies scholar Johan Galtung outlines the most fundamental guidelines for economics and peace as the satisfaction of basic needs on the local, national and global level, equal global trade relations, and economic activity which gives people a life in dignity and fosters equitable relations between countries. We have to ask ourselves if our current economic systems and trade policies achieve those principles or if it is in our interest to maintain and create new trade frameworks which consist of grabbing natural resources of others and using the military to protect what we took.

The current debate on the Trans Pacific Partnership suggests that the agreement will lead to immense social conflict, unrest and instability. Trade is not the issue. People and societies have always traded and will continue to do so. The trade relationships and mechanisms are at the core of whether trade drives violent conflict and war or contributes to peace. We’ve seen our share of wars and violence; it is time to use the potential of trade for peace.

Patrick. T. Hiller, Ph.D., Hood River, OR, syndicated by PeaceVoice, is a Conflict Transformation scholar, professor, on the Governing Council of the International Peace Research Association, and Director of the War Prevention Initiative of the Jubitz Family Foundation.

3 Responses to “TPP, Peace and Conflict – It’s Not about Trade, It’s about How We Trade”