Under The Sun: Australia’s Largest Solar Farm Set to Sprout in a Queensland Field

A sea of glass panels may soon be sprawling across a paddock in Queensland’s Darling Downs cranking out two gigawatts of energy – 100 times more than the largest solar farm in Australia today – and a former top flight barrister is the unusual shining light behind its development. 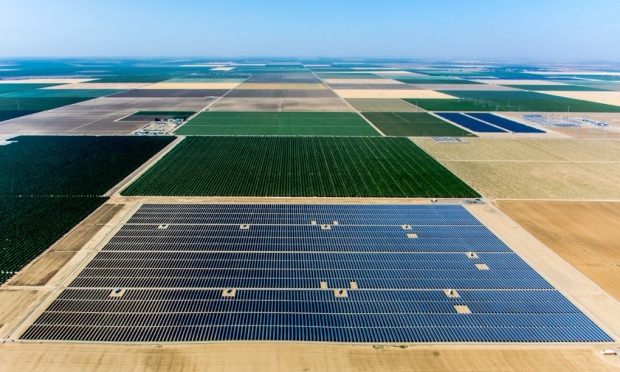 A 20MW solar farm constructed on land in California’s central valley – the Bulli Creek solar farm would be 100 times as large as this installation. Photograph: Proehl Studios/Corbis

He killed off rumours bedevilling rising political stars in Canberra. He acted for defence intelligence chief Frank Lewincamp against the Bulletin over stories on Indonesia and the East Timor crisis, in a case where generals Peter Cosgrove and Angus Houston gave evidence. He won the largest damages ever awarded by a judge, $385,000, for rugby league player Mark McGaw over false Today Tonight stories of domestic violence. 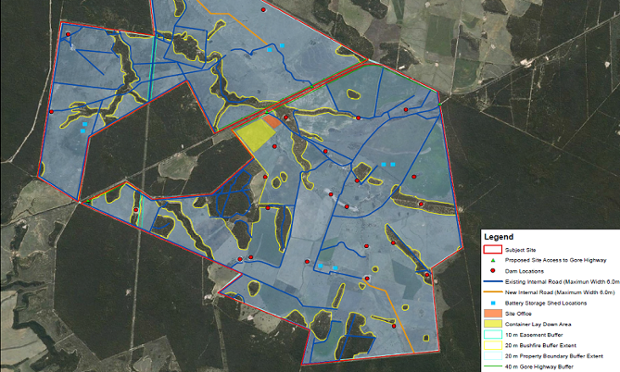 A map of the proposed Bulli Creek solar farm.

But after seven years as a barrister, Gemmell decided to leave the intellectual challenges of “other people’s problems” behind, hang up his wig and gown, and devote himself to power in a purer form.

Gemmell set up Solar Choice – a solar project broker and consumer comparison service – while still in his legal chambers and he is now the proponent of what stands to become the largest solar farm in the country, perhaps the world.

A sea of glass panels, to be located at Bulli Creek on Queensland’s Darling Downs, could be capable of cranking out two gigawatts of power within eight years. That is equivalent to one fifth of the current total renewable energy target for the entire country in a single power station. It is also more power than any coal fired station in Queensland can currently muster.

“Excellent sunlight hours” are just one reason why Bulli Creek is ideal for a large-scale solar farm, Gemmell says.

It is also grazing land – meaning no prime cropping land need be sacrificed – and is flat, treeless and has no neighbours.

Crucially, Bulli Creek is close to a major transmission node in the national electricity grid, a 330 kilovolt substation, perfectly located to send power around the country.

“There’s a surprisingly small number of sites (in Australia) that have everything all aligning at once,” Gemmell says.

Factors seem to be likewise aligning in solar power’s favour more broadly, although a few things still need to fall into place for the likes of Gemmell.

Investment banks are leaning away from coal fired stations towards large scale renewables, he says, while the electric car market is driving rapid innovations in battery storage that are an automatic fillip to the solar energy industry.

Those advances are essential in helping the solar industry “nullify the argument principally raised against renewables as being intermittent, and deliver smooth power throughout the day and night,” Gemmell says.

Battery storage is what Bulli Creek will also need to reach full capacity and most effectively integrate with the nearby substation. 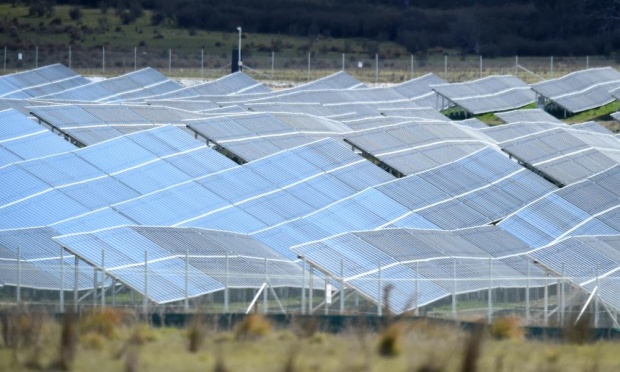 The FRV Royalla solar farm near Canberra is currently Australia’s largest at 20MW. This farm is expected to generate an average 37,000 MWh of renewable energy each year and will meet the needs of 4,500 Canberra households. Photograph: Lukas Coch/AAP

A report this week by a German think tank Agora Energiewende predicted solar would be the cheapest form of energy in a decade.

Gemmell, citing deals for 260MW projects in Dubai and power purchase agreements at US 5.84c a kilowatt hour, agrees. “It’s now foreseeable that solar will in the next decade be able to outcompete a very old, fully depreciated coal-fired generator that chugs along at 3 or 4 cents a kWh.”

“Obviously once a project’s been constructed, the cost of fuel is free, it’s sunlight, and Australia is wonderfully geared to some visionary projects to harness those benefits of cheaper, bountiful, reliable sources of power,” Gemmell says.

“We’ve got abundant space, modern infrastructure across the longest continuous grid on the planet, from Cape York to Tassie, and amongst all that space is plenty of sunshine.”

Big energy players like AGL, who are still buying coal-fired power stations, are nevertheless also moving into solar farms and other renewables, which Gemmell says will inevitably quicken.

“I think eventually they’ll realise you can’t hold back the forces of economics forever and, even though we’re perhaps more so than any other country on the planet heavily wedded to coal, the economics of large scale solar is on the right side of history,” he says.

“It’s not a matter of if these projects will be built but when.”

In large-scale solar’s infancy, however, market signals from government matter, even more so in their absence. 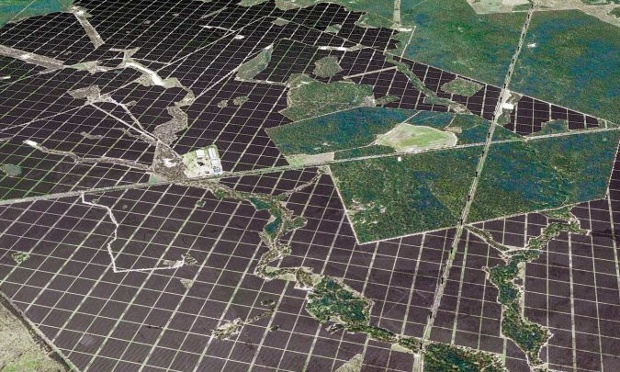 A computer generated image of the proposed solar farm.

Investors have reviewed the Bulli Creek project but Gemmell says the commitment to bring in “the big funds” still awaits clarity from the Abbott government on the status of Australia’s renewable energy target (RET), which has been under review for a year.

The RET is also a key driver of what kind of power purchase agreement Bulli Creek can secure from a big Queensland electricity retailer like Energex or Origin.

“Hopefully we won’t be the first country in the world to diminish our renewable energy target. Most countries are increasing theirs,” Gemmell says.

“We would prefer as an industry no deal rather than a bad deal.

“But if there’s a reasonable compromise at least we know where the goalposts are to kick the ball. At the moment we’ve got the ball ready on the mark to kick it, we’ve just been waiting for some time now to know where the goal posts are going to be.”

In the meantime, Solar Choice will spend the next six to nine months working with the wholesale network owner Powerlink on the right way to connect the solar farm to the grid.

After that, the contract with the energy retailer is the final milestone before construction, due to begin next year.

The solar farm gained formal planning approval from Toowoomba regional council last month in what Gemmell said was “a wonderful tangible milestone for the project”.

Asked if the urgency of responding to climate change meant that, as one commentator has suggested, someone has to get rich, Gemmell responds: “No one’s suggesting that we need to take a communist approach to this.”

“It’s a free market and those who are able to be the first to innovate and embrace the change and to move with it should do well and they shouldn’t be punished for doing so,” he says.

“Obviously there’s a great amount of opportunity out there but it does take a fair bit of boldness as well to be able to participate in this paradigm shift.”