Native Hawaiians are not protesting science, but instead are seeking respect for sacred places, and our planet. 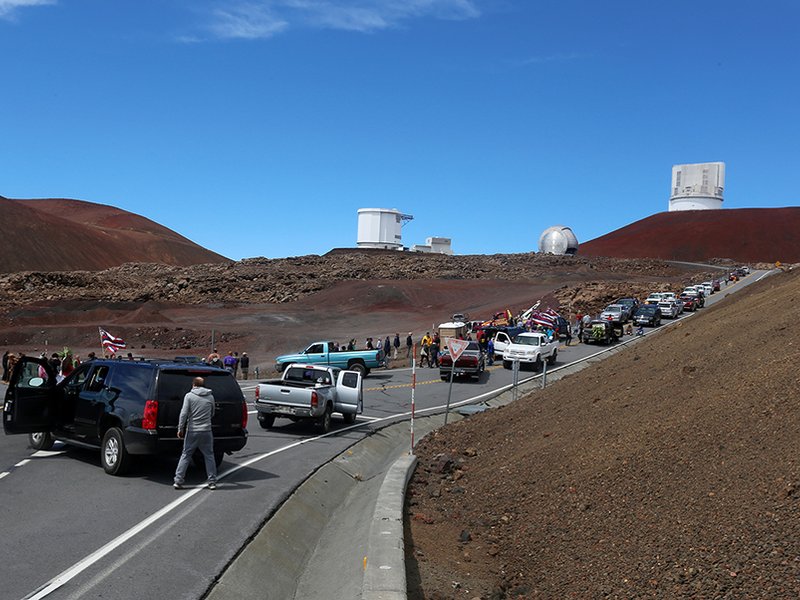 23 Apr 2015 – At this moment all over the Hawaiian islands, but especially atop Mauna Kea volcano, there are protests against the building of a new Thirty-Meter Telescope (TMT) on this sacred mountain. The telescope has become a cause célèbre among Native Hawaiians and their allies, and the issue is going viral. Newspapers around the world are reporting the story and people are abuzz on social media—especially as the issue becomes more emotionally charged. This week, a University of California, Berkeley professor sent around a petition in favor of the telescope with language in it that has incited charges of racism. A group of scientists countered with a statement saying the message was unacceptable.

From the outside, this argument may seem like another case of Native beliefs versus modern science. As astronomer Tom Kerr wrote back in 2011, “It seems to me that it’s an argument about returning to the stone age versus understanding our universe and it’ll be interesting to see who wins in the end.”

Mauna Kea is the highest peak in the Hawaiian islands. This massive dormant volcano rises 13,796 feet (4,205 m) above sea level and in the winter its top is often blanketed in snow. “Mauna kea” means “white mountain,” but there are those who say it is short for “Mauna o Wakea,” the mountain of the Hawaiian deity Wākea. Either way, its summit is considered to be a most sacred—if not the most sacred—spot in the Hawaiian archipelago. Its rugged peak, covered in small cinder cones or puʻu, is the home to a handful of Hawaiian deities.

But because the Hawaiian Islands lie far out in the middle of the Pacific, far from any continental landmass, and because the atmosphere is much cleaner and there is far less “light pollution” from urban areas, this makes Mauna Kea one of the best places on the planet for astronomical observatories. So it is also home to the world’s largest, with 13 working telescopes operated by astronomers from 11 different countries. (The Harvard Smithsonian Center for Astrophysics operates the Submillimeter Array (SMA) on Mauna Kea, but is involved in the construction of the Giant Magellan Telescope in Chile’s Atacama desert rather than this one on Mauna Kea.) The new TMT would enable astronomers to see “forming galaxies at the very edge of the observable Universe, near the beginning of time.”

And this is where the problem lies.

Astronomy on Mauna Kea has been a boon to the University of Hawaii and brought income to the State. The nearby town of Hilo takes pains to honor its neighbor and has low-intensity street lights to keep ambient light to a minimum.

But protests against construction on Mauna Kea have been going on for decades. The existing white observatory buildings are readily seen (on clear days) from many parts of the island. And while the current project has engaged in a lengthy public review process, including consultations with Native Hawaiian groups, the history has been far less sensitive to Native opinion.

What is really at stake, however, is a conflict between two ways of knowing and being in the world. For many Native Hawaiians and other Indigenous peoples, sacredness is not merely a concept or label. It is a lived experience of oneness and connectedness with the natural and spiritual worlds. It is as common sense as believing in gravity. This experience is very much at odds with the everyday secular-humanist approach of Western thinking that emerged out of the Enlightenment (as I have discussed in a previous essay), and which sees no “magic” or “enchantment” in the world. And of course, seeing nature as inert facilitates both commercial exploitation and scientific exploration. 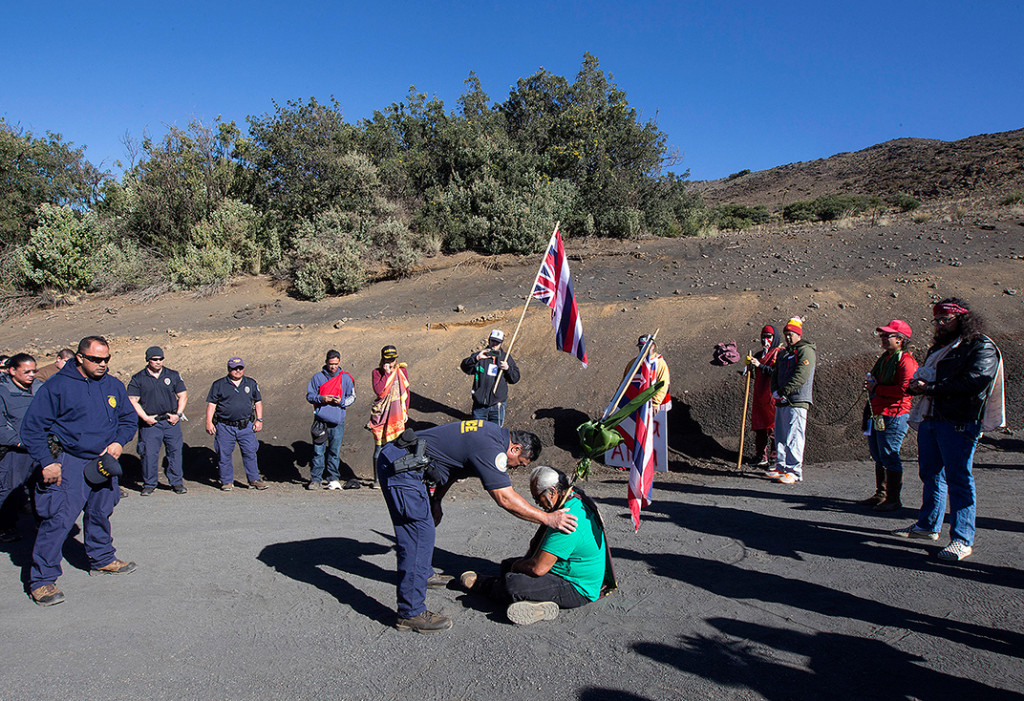 Protesters have for the past three weeks created a human blockade. More than 30 people have been arrested. On April 2, 2015, a Department of Land and Natural Resources Officer speaks with one of the activists. (AP Photo/Hawaii Tribune-Herald, Hollyn Johnson)

Since climate change and other mounting environmental issues are pushing more and more people to accept that our dominant view of the planet is flawed, increasing numbers of non-indigenous peoples are looking towards traditional worldviews for approaches that are more conscientious, respectful and encouraging of stewardship for our planet and its special places. And it is this nerve, among others, that is stirring the current protests over the TMT.

More than that, however, is the legacy of colonialism in the Hawaiian islands. Ever since a dozen or so non-native businessmen overthrew the legal and world-recognized government of the Hawaiian Kingdom in 1893, the islands have been inundated with immigrants and development, while Native Hawaiians themselves sank to the bottom in terms of many social and economic indicators. Countless Hawaiian sacred sites have been bulldozed, dismantled, or even used for military target practice. Unsurprisingly, this has left a great many Native Hawaiians very unhappy. And with the 1970s cultural renaissance and the increase in political awareness, many are taking a bolder stance against further desecration of Hawaiian culture and traditional sites.

Enter the TMT. Now to say Hawaiians are opposed to technology or science is simply wrong. Hawaiians have a long and illustrious tradition of adopting Western technologies. King Kalākaua had electricity in his palace before the White House had it. And he is quoted as follows:

“It will afford me unfeigned satisfaction if my kingdom can add its quota toward the successful accomplishment of the most important astronomical observation of the present century and assist, however humbly, the enlightened nations of the earth in these costly enterprises…” ~ King Kalākaua, September 1874  as quoted in the Pacific Commercial Advertiser, upon arrival of a British expedition of astronomers to Hawaii

But that was when Hawaiians were in control of their own country, and before the devastating impacts of American rule. Now many are saying “enough.” The TMT, while not being built on one of the sacred puʻu at the summit, will be a much larger and more extensive project than any before, with a building 18 stories tall and an impact on five acres of summit. The project has gone through extensive reviews for its environmental and cultural impacts, and was originally supported by the Office of Hawaiian Affairs (OHA) in 2009. But in an April 12 poll by the Honolulu Star-Advertiser, 61 percent of respondents said OHA should oppose the TMT. As OHA Trustee Peter Apo points out, “Hawaiians are joined by ecological and environmental watchdog constituencies with natural resource management concerns about stewardship issues in the state’s management of the geo-cultural landscape of plants, native birds, rare insects, historic sites, and so forth.”

Meanwhile, Native Hawaiians and others from around the state have come to protest, including hula dance troupes. University of Hawaii students and faculty staged a walk-out. Protesters camping out on the top of the mountain have created a human blockade for three weeks, and more than 30 people have been arrested, creating some poignant moments between Native Hawaiian police and protesters and prompting a third moratorium on the construction, this time with no end date. But as vigorous as the protests have been, they have also been peaceful and respectful. As organizer Kealoha Pisciotta has said, “It’s a temple. You can’t make war in a temple. You can stand for reighteousness. It demands aloha.”

The dilemma here is tough on both sides. The TMT people say that the telescope “is committed to a new paradigm of development on Mauna Kea founded on integrating culture, science, sustainability and education.” If so, people on the culture side are far from satisfied. But, as several have pointed out, it is not because they are against science.