6 Apr 2015 – The 13th edition of the World Social Forum (FMS) 2015, which took place over four days in the Tunisian capital, completed its work under the slogan of “all-out solidarity with all oppressed peoples.” The WSF 2015 was marked by a series of activities of participants at the Farhat Hachad campus in El- Manar Tunis. 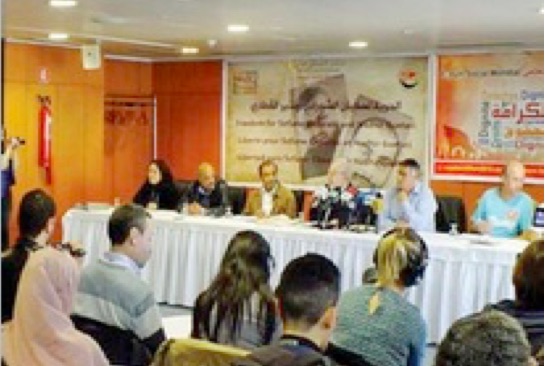 I must say that this 13th edition was difficult to organize by the Tunisians since since it came barely a week after the terrorist attack on the Bardo Museum. In response, the WSF organizing committee reaffirmed that “terrorism can not win, and will not stop us in Tunisia.”

We must also say that the WSF 2015 was marked by strong Algerian participation with no less than 1,200 participants. No less than 200 associations are involved in the WSF-2015 in Tunis, including the UGTA (General Union of Algerian Workers), student organizations, the Nada network for the defense of children’s rights, and the National Association of youth exchanges (ANEJ). “This is a mosaic, and that’s a first,” according to Ali Sahel, coordinator of the delegation and chairman of the ANEJ. Workshops were programmed by them. This is the promotion of youth activities in Algeria and lectures on the “right to self-determination of the Saharawi and Palestinian people”, “Interventions versus the right to national sovereignty” or “stopping the exploitation of shale gas” .

In the WSF work program, many different events were held, including debates between politicians and international cultural and musical events. Participants in the demonstration of the Youth Committee of the World Social Forum, which began last Tuesday with the slogan “A youth movement that works for change”, called for constitution of a front of young people.

“The 2015 edition of the WSF is an important step towards universal activism advocating socio-economic change through the participation of more than 50,000 people representing 5,800 organizations including 270 related to youth,” according to the coordinator of the Youth Committee of the WSF, Mr Makhlouf Zied. He welcomed the increase in the number of participants after the Bardo attack” which illustrates the great solidarity shown towards Tunisia by the international community.” In a statement to El Mujahid, on the sidelines of the closing of the 13th edition of the WSF, Makhlouf said that “the WSF will continue its commitment to this goal with began in Porto Alegre in Brazil.” The Forum has “helped accomplish a perceptible socio-economic change in Latin America, including Argentina, Venezuela and Brazil,” he said.

For his part, Dr. Louay Aoudi, representative of the Association Forum of Palestinian youth in the diaspora, said that “the Palestinian cause is limited now to geography, but concerns the whole of humanity, being a struggle against Zionism, the fascist capitalism and a spearhead for freedom. ” He also estimated that the WSF 2015 Tunis is “a tool for the unification of the world’s youth forces” “to get free from the clutches of Zionism and marginalization.”

For Mac Caraminda Lorin, representative of the WSF organizing committee in Montreal in 2016, “The record participation in the 2015 WSF in Tunis reflects the great sympathy of the world’s youth in Tunisia after the latest attacks.” “We are also here to express the concerns of young Canadians with the strike by nearly 50,000 students in protest against the austerity policy. This space is a good opportunity to exchange experiences and views on these common problems of young pending the 2016 edition in Canada, “she said.

According to the organizers, considering the context of the WSF 2015, “the demand for climate justice, and beyond, an environmental justice, is the expression of a questioning of a system of production and consumption which has no future and an environmentally predatory relationship by man. Increasingly social movements and intellectuals worldwide, interpret this crisis not only as a financial crisis or as a failure of capitalism, but more deeply as a true crisis of civilization. The very foundations of the system, economic, social, environmental, cultural and political, are challenged by a large part of humanity who see them as the source of economic, social and political injustice in the world, and as the source of damage to the earth “.

Finally, it should be noted that the Assembly of Social Movements of the WSF 2015 called for strengthening solidarity with the peoples of the world who struggle daily against imperialism, colonialism, exploitation, patriarchy, racism and injustice.