Geopolitics Is a Fluid Game: Negotiations and Their Enemies

10 May 2015 – Perhaps the correct title should be “negotiators and their enemies.” These days, negotiations are very much in the news. The United States is negotiating with Cuba, with Iran and, most recently it seems, with Venezuela. The government of Colombia is negotiating with a long-time anti-government movement, the FARC. 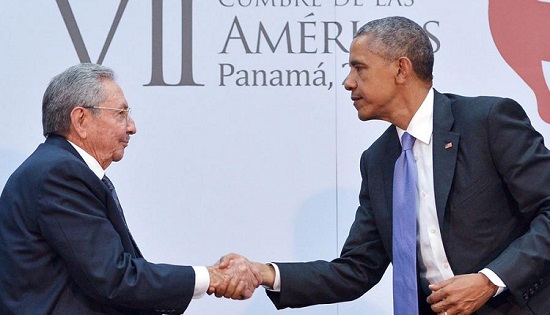 US President Barack Obama (R) shakes hands with Cuba’s President Raul Castro during a meeting on the sidelines of the Summit of the Americas at the ATLAPA Convention center on April 11, 2015 in Panama City. AFP PHOTO/MANDEL NGAN (Photo credit should read MANDEL NGAN/AFP/Getty Images)

Then, there are the pre-negotiations that may not get to the stage of negotiation: Russia and the European Union (and within that, the Kiev government of Ukraine and the “autonomist” governments in Donetsk and Lutsk; China and the United States; the government of Afghanistan and the Taliban.

And finally, in the spirit of Sherlock Holmes’s mystery about “the dog that didn’t bark,” there are the negotiations that are NOT taking place: Israel and the Palestinians; Iran and Saudi Arabia; China and Japan.

What does a focus on such negotiations, including those that are not taking place, tell us about the state of the world? The first is that, the closer one is to real negotiations, the fiercer the opposition to an accord turns out to be. Those in favor are somewhat hesitant and always unsure that they can carry their own supporters along on any arrangement upon which there is a public accord with the other side. But those opposed are not at all hesitant. They are ferocious and very angry and use whatever leverage they have to block or sabotage the negotiations.

Are negotiations a good thing? That’s exactly what the argument is about. The greatest plus about negotiations that end in some kind of compromise accord is that they reduce – reduce, not eliminate – the suffering that continuing conflict imposes upon almost everybody. A second plus is that those who favor continuing the conflict constantly argue that the way to win is to increase the pressure – more military action, more blockades, more torture. As a result, there is a creeping increase in the violence over time, something that an accord stops, more or less.

But there is also a big negative. The other side survives, and sometimes even thrives. The accord legitimates them. And if they are attacked politically, they can argue – they do argue – that their accusers are trying to revive the conflict and undermine the accord. Peace, if that is what we call it, tends to be at the price of not challenging the underlying injustices that provoked the conflict in the first place. We see this in the post-accord role of the erstwhile revolutionaries in such countries as El Salvador and Guatemala.

When do such negotiations, such accords, occur? One crucial element is internal political exhaustion combined with military deadlock. But this is usually not enough. The second crucial element is outside geopolitical pressure. Countries not involved directly in the conflict, but somehow tied to one or the other of the two sides in a negotiation, find it in their third-country interest that the conflict should be terminated. They have acquired an interest in the conflict, their interest requiring that the conflict cease. If the United States and Cuba are negotiating today, the explanation lies in the combination of internal pressures in the case of Cuba and external pressures in the case of the United States.

If we look at the two most glaring absences of negotiations – Saudi Arabia and Iran, Japan and China – why the ever more angry rhetoric, why so much hostility? An anthropologist coming from Mars might find it hard to believe. Saudi Arabia and Iran share a deep commitment to an Islamic culture and a strong endorsement of shari’a. Japan and China share a long mutual commitment to an interlaced set of cultural values and even linguistic structures and symbols.

And yet they are denouncing each other, and are pursuing the geopolitical objective of weakening the other in terms of geopolitical power and influence. These days, they are deliberately invoking those parts of their cultural heritages that differentiate them from the other rather than those parts that in fact bring them together.

Why, why, why? One answer is that the leadership in each of these countries finds it in their internal interests to retain the image of the other as an enemy. Faced with deep internal schisms that could tear these countries apart, they appeal to national cohesion in the face of a presumed external threat. A second reason is that external forces urge on the conflict because it is in the interest of these third countries that the hostilities exist and are defined in certain ways.

Where then are we heading? We must always remember that geopolitics is a fluid game, and most particularly in this time of structural crisis of the modern world-system with its chaotic and rapid swings in all arenas, not least in geopolitical alignments. The ambiance can change, and quite unexpectedly. Remember that pre-negotiations tend to be secret – the more secret the more successful. For all we know, they are going on right now. It may be that only when the secret leaks and we know negotiations have started that the enemies will mobilize and try to sabotage them. And of course quite often the enemies of negotiations win out. They are working very hard right now to make the potential U.S.-Iranian accord fail. In the case of this potential accord, I hope an agreement is reached, since its positives far outweigh its negatives.