20 May 2015 – Chinese Premier Li Keqiang is visiting South America, and it’s expected that he’ll formalize its regional version of the Silk Road, the Twin Ocean Railroad, during his trip. This far-reaching project endeavors to construct a 5,300 km railroad from Brazil to Peru, traversing some of the world’s most difficult and sensitive terrain. Along the way, however, it may have to contend with some emerging asymmetrical threats, such as the potential rise of violent environmentalist-indigenous groups or the reemergence of the Shining Path terrorist organization. Should the project be built and succeed in actualizing its economic potential, however, then it could provide the cure for resolving the Pacific Alliance-Mercosur rivalry that threatens to divide the continent and impede its multipolar integration.

China’s grand strategy is to facilitate global trade via strategically constructed infrastructure projects, believing that the economic freedom this provides to its partners can liberate them from Western unipolar frameworks and more easily transition them into the emerging multipolar system. Complementarily to this vision, it announced the Silk Road Economic Belt and Maritime Silk Road projects to spread this vision throughout Eurasia and Eastern Africa. Informally, however, it also aims to tie Latin America into this system through its latest commitments to the trans-continent (Central America and South America). China’s been responding to the US’ Pivot to Asia through its own pivot, albeit an eastward one towards the Western Hemisphere, and the latest railroad plan is an indication that it’s hedging its bets on a prolonged presence in the region.

Dialogo Chino has an excellent write-up and accompanying interactive map about the specifics of the Twin Ocean Railroad, and it speaks a lot to the transformational nature of this project. It’s anticipated to begin at Porto Do Acu near Rio De Janeiro and beeline directly northwest until right around the northern portion of the Bolivian border, after which it’ll snake through the Andes and end at Peru’s Puerto Ilo. Along the way, it’ll pass through Brazil’s industrial, coal, agricultural (especially soy and beef), phosphate, and timber heartlands, helping to bring all their affiliated products across the Andes and closer to the hungry Chinese marketplace. The most immediate goal is to integrate the two BRICS members’ economies closer than ever before, as well as provision Beijing with a South American Pacific foothold via the Peruvian port. This is expected to complement its hemispheric strategy alongside the Chinese-financed Transoceanic Canal in Nicaragua, with both major infrastructure projects forming the respective northern and southern anchors of China’s pivot to Latin America. 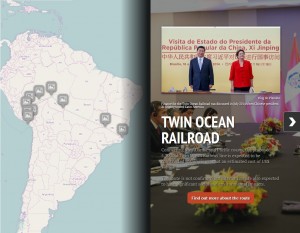 While China’s South American Silk Road plan sounds fine and dandy on paper, it might actually be pretty challenging to pull off on the ground. Aside from geographic obstacles such as daunting mountains and near-impenetrable jungle, there are also socio-political and military threats that could delay or completely offset its construction in certain areas. Here’s what could reasonably stand in the way of the Twin Ocean Railroad or be externally manufactured to do so:

Although the official path of the railroad has yet to be publicly disclosed, the roundabout estimates of where it would likely traverse lead some to be concerned about its environmental and social consequences. More to the point, important tracts of rainforest, wildlife, and indigenous communities (some of which remain voluntarily isolated) are possibly at risk of being disturbed by the project, and these two topics – the environment and indigenous rights – are known to rally a coalition of domestic and international supporters in their favor. The risk here is that resistance from either of these two groups (but especially from the indigenous community and their advocates) could become a public relations scandal that evolves into a domestic political issue and part of the national discussion, which in turn could allow anti-multipolarity opposition movements in Brazil and Peru to capitalize upon the negative sentiment and exploit it as a tool in their campaign for power.

Evolving off of the previously mentioned threat scenario for the Twin Ocean Railroad, it’s possible that the aforementioned actors could eventually transition to armed opposition. After all, this wouldn’t be completely unique, as a guerrilla movement generally supporting the same movements just mentioned has recently popped up in Paraguay. The Paraguayan People’s Army (PPE) is a Marxist guerrilla group that’s alleged to have ties with FARC and other South American drug trafficking organizations, and it’s taken on militant environmentalism as its latest rallying cry. The PPE’s most recent attack in April saw it strewing propaganda pamphlets next to its three dead victims that decried the cultivation of “soy, corn, and other products that require pesticides” (predictably in response to Monstanto’s control over the country), as well as the arming of anti-guerrilla farmers’ militias.

It unsuccessfully tried to garner favor with the Mbya Guarani indigenous population in the past, but this doesn’t mean that its prior offsets have led it to completely abandon this strategy for the future. Therefore, as seen through its intent (but not necessarily success) in using environmentalism and indigenous rights as part of its community outreach efforts, the PPE presents a violent fusion of the two main themes that could one day unite the main interest groups opposed to the Twin Oceans Railroad into an organized mass. It’s not to forecast that the PPE will expand its operations into Brazil or Peru, but that likeminded and/or copycat movements could develop around these principles, and that the very fact that the PEE uses these two ideas as part of its information operations sets the precedent for future violent groups to hide behind them as well.

The pinnacle of opposition to the South American Silk Road could see environmental and indigenous groups uniting in a terrorist campaign against the Brazilian and Peruvian governments. While Brazil doesn’t have a history of rural terrorism to this extent, Peru does, and it’s possible that this problem could ‘inconveniently’ raise its head once more as China moves forward with the Twin Oceans Railroad in the country. The Shining Path, recognized as a Maoist terrorist group by the US and EU, has shown small sparks of renewed activity in the past couple of years (mostly focusing on the drug trade), making one wonder whether they could one day receive a second wind. If the movement revives itself (perhaps even with outside [Western] support), it could pose a disaster for the construction of the South American Silk Road, especially since the group has an operational history in the jungle and mountainous areas that the railroad is envisioned to travel through. There’s also the disturbing scenario that the terrorist tactics and motivations of the Shining Path and the Paraguayan People’s Army could spread into Brazilian Amazonia, which would then create a challenging internal crisis that could bog down the South American bastion of BRICS. 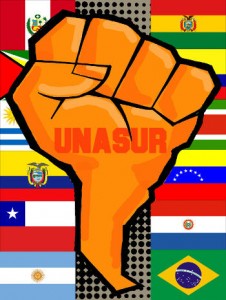 The construction of the Twin Ocean Railroad would link the Atlantic and Pacific coasts of South America straight through the central part of the continent, thus representing an historic engineering feat with profound economic and political implications. One of the most important aftereffects of this project’s completion could very well be the mitigation of tension between the rival Pacific Alliance and Mercosur trade blocs and the strengthening of the continental-wide integrational group UNASUR. The reasoning for this optimism is simple – China’s economy is of such size and strength that Beijing could throw its weight around and ‘mediate’ between the two blocs, and this is even more so if its railroad plans (which will be the only major infrastructure project connecting the two) are completed. If the Pacific Alliance and Mercosur converge, as has previously been discussed, then the logical result would be the creation of a pan-continental free trade area, essentially providing the economic foundation for closer integration in other spheres. It should be a given that a more closely integrated South American would be more resilient in resisting the US’ hegemony, and with the Twin Ocean Railroad being the engine that would drive this multipolar process, it should be expected that the US will mobilize its proxies in whichever manner it can in order to push back against it at all costs.