Donors Pledge Over 4.4 Billion Dollars to Nepal – But With a Caveat

Blessed with more than 4.4 billion dollars in pledges at an international donor conference in Kathmandu on Thursday [25 Jun 2015], the government of Nepal is expected to launch a massive reconstruction project to rebuild the earthquake-devastated South Asian nation. 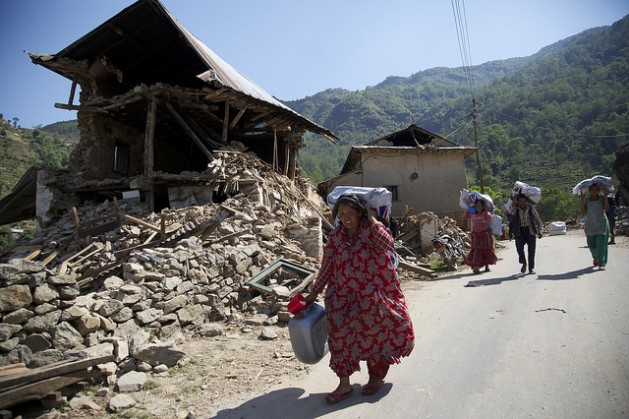 Nepalese people carry UK aid shelter kits back to the remains of their homes, 10 days after the 7.8 magnitude earthquake struck the country on 25 April 2015. Credit: Russell Watkins/DFID

But the pledges came with a caveat.

“While donors were generous, many of them strongly emphasised the need for Nepal to strengthen efficiency, transparency and accountability in handling international assistance,” Kul Chandra Gautam, a former deputy executive director of the U.N. children’s agency UNICEF, told IPS..

“They also emphasised the need for political stability, early local elections and speedy completion of the long pending Constitution drafting process,” said Gautam, a native of Nepal and a former U.N. assistant secretary-general, who is based in Kathmandu.

Nepal had a projected goal of 6.7 billion dollars for the next phase of rehabilitation and reconstruction of the destroyed infrastructure and services.

This was a rather conservative or realistic needs assessment, considering that the estimated loss and damage from the earthquake was over 7.0 billion dollars, and it usually costs more to “build back better” than just the replacement cost of the destroyed and damaged infrastructure, Gautam said.

It was understood, he pointed out, about one-third of the estimated needs would be met from national resources and two-thirds would come from donors.

Donors really opened their hearts for the suffering people of Nepal, he said.

“We were delighted that even small poor countries like neighbouring Bhutan and faraway Haiti were forthcoming with generous pledges of 1.0 million dollars each,” said Gautam.

The United Nations estimated that about eight million people – almost one-third of the population of Nepal – were affected by the earthquake in April, described as “the largest disaster the country has faced in almost a century.”

More than 8,600 people were reported to have died, and according to U.N. figures, more than 20,000 schools were completely or significantly damaged and about a million children and 126,000 pregnant women are estimated to have been affected.

Caroline Baudot, Oxfam’s Humanitarian Policy Adviser, told IPS the proposed investment provides Nepal with a golden opportunity to get people back on their feet and better prepared for the future.

“Now that pledges have been made, Oxfam is calling for communities to be consulted when the reconstruction plan is developed and implemented, continued attention to livelihoods and access to services, and that future disaster risks are reduced through reconstruction.”

She said donors and the Government of Nepal must now ensure there is a long-term plan which listens to communities – putting people at the center of the reconstruction process, which builds improved basic services like hospitals and ensures new buildings are safe and earthquake resilient.

“It is critical that the international community and Nepal learn from the mistakes of past emergencies, where up to half of pledges are never delivered on. Donors must make good on their promises and ensure the finance they have committed reaches those who need it,” said Baudot.

In a message to the conference, Secretary-General Ban Ki-moon said Nepal has stood strong during this crisis.

“I commend the exceptional efforts of the country’s government and people – in particular the youth who have found new and innovative ways to help their country.”

He also said that the United Nations “stands ready to support the government and people of Nepal in this endeavor. I am confident that Nepal, with its resilient people will be able to recover from this devastating disaster.”