Japanese Prime Minister Shinzo Abe on Thursday [16 Jul 2015] pushed through parliament’s lower house legislation that could see troops sent to fight abroad for the first time since World War Two, despite protests and a risk of further damage to his sagging ratings. 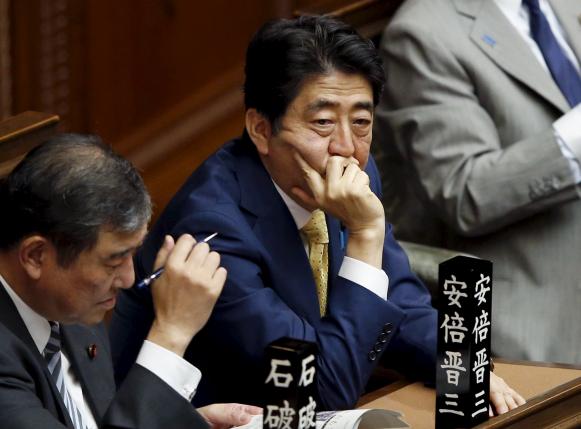 A lower house panel approval on Wednesday of the unpopular bills, which would drop a ban on collective self-defence or fighting to defend a friendly country like the United States, sparked a huge demonstration near parliament.

The protests were reminiscent of those that toppled Abe’s grandfather from the premiership 55 years ago after he rammed a revised U.S.-Japan security pact through parliament.

Organisers said over 20,000 had gathered by about 8 p.m. on Thursday despite threatened rain, after saying 100,000 took part the day before, when crowds swelled as the evening wore on.

The bills next go to the upper house, where opposition parties can delay a vote although the ruling bloc has a majority. If no vote is held within 60 days, they return to the lower house, where Abe’s coalition can enact them with a two-thirds majority.

Abe says a bolder security stance, welcomed by ally Washington, is essential to meet new challenges, such as those from a rising China.

“The security situation around Japan is getting tougher,” Abe told reporters after the vote, which took place after opposition parties walked out of the chamber. “These bills are vital to protect the Japanese people’s lives and prevent war.”

The changes expand the scope for Japan’s military to also provide logistics support to friendly countries, relax limits on peace-keeping operations and make it easier to respond to “grey zone” incidents falling short of war.

Opponents say the revisions could entangle Japan in U.S.-led conflicts around the globe and violate pacifist Article Nine of the U.S-drafted, post-war constitution.

“I feel like the constitution is being destroyed,” said 81-year-old retiree Yukitaka Koyama protesting near parliament.

China’s Foreign Ministry said the move called into question Japan’s post-war commitment to “the path of peaceful development”, and urged Japan to learn the lessons of history.

Sino-Japanese ties have long been frayed by China’s memories of Japan’s wartime aggression, although relations have thawed since a November leaders’ meeting.

Abe, who returned to office in 2012 pledging to bolster Japan’s defences and reboot the economy, has seen his support slip to around 40 percent on voter doubts about the legislation and other policies, such as a plan to restart nuclear reactors.

A clash with the governor of Okinawa over a U.S. Marines air base will likely flare up in August, when Abe will also unveil a controversial statement marking the 70th anniversary of the end of World War Two.

Some analysts have begun to draw parallels to Abe’s grandfather, Nobusuke Kishi, a wartime cabinet minister who was premier from 1957 to 1960 and resigned on July 15, 1960 because of a public furore over the U.S.-Japan security pact.

Other analysts say that although Abe’s ratings will take a hit, he is likely to survive and win re-election in September for another three-year term as leader of his Liberal Democratic Party, given weak opposition inside and outside of the party.

“There is a lot of hubris and arrogance and it will come back to haunt him. He is no longer the Teflon prime minister,” said Jeffrey Kingston, director of Asian studies at Temple University’s Japan campus.

Additional reporting by Ben Blanchard in BEIJING and Teppei Kasai in Tokyo; Editing by Michael Perry

One Response to “Japan’s Abe Pushes Security Bills through Lower House, Despite Protests”