Unusually high winds allowed Denmark to meet all of its electricity needs – with plenty to spare for Germany, Norway and Sweden too. 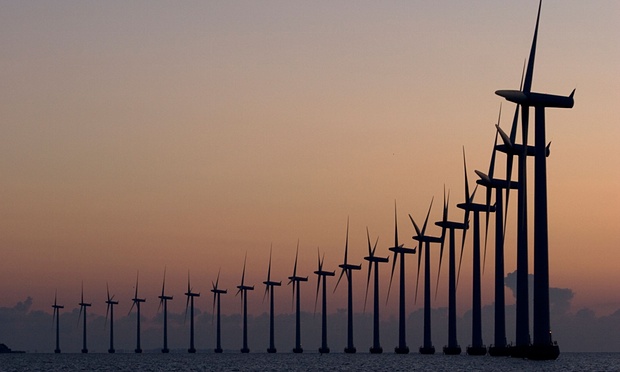 10 Jul 2015 – So much power was produced by Denmark’s windfarms on Thursday that the country was able to meet its domestic electricity demand and export power to Norway, Germany and Sweden.

On an unusually windy day, Denmark found itself producing 116% of its national electricity needs from wind turbines yesterday evening. By 3am on Friday, when electricity demand dropped, that figure had risen to 140%.

Interconnectors allowed 80% of the power surplus to be shared equally between Germany and Norway, which can store it in hydropower systems for use later. Sweden took the remaining fifth of excess power.

“It shows that a world powered 100% by renewable energy is no fantasy,” said Oliver Joy, a spokesman for trade body the European Wind Energy Association. “Wind energy and renewables can be a solution to decarbonisation – and also security of supply at times of high demand.”

The figures emerged on the website of the Danish transmission systems operator, energinet.dk, which provides a minute-by-minute account of renewable power in the national grid. The site shows that Denmark’s windfarms were not even operating at their full 4.8GW capacity at the time of yesterday’s peaks.

A surge in windfarm installations means Denmark could be producing half of its electricity from renewable sources well before a target date of 2020, according to Kees van der Leun, the chief commercial officer of the Ecofys energy consultancy.

“They have a strong new builds programme with a net gain of 0.5GW in new onshore windfarms due before the end of the decade,” he said. “Some 1.5GW from new offshore windfarms will also be built, more than doubling the present capacity. We’re seeing a year-on-year 18% growth in wind electricity, so there really is a lot of momentum.”

The British wind industry may view the Danish achievement with envy, after David Cameron’s government announced a withdrawal of support for onshore windfarms from next year, and planning obstacles for onshore wind builds.

Joy said: “If we want to see this happening on a European scale, it is essential that we upgrade the continent’s ageing grid infrastructure, ensure that countries open up borders, increase interconnection and trade electricity on a single market.”

Around three-quarters of Denmark’s wind capacity comes from onshore windfarms, which have strong government backing.