9 Aug 2015 – After marking the destruction of Nagasaki and the police-murder of Michael Brown in Ferguson on August 9th, Americans have options for what to commemorate on August 10th. I’m inclined to think that August 10th should be formally recognized as Gulf of Tonkin War Fraud Day. But I’m not sure, because another event is in even more need of remembrance.

It was the day after the death blow to Nagasaki, 70 years ago, that the victors of the most awesomest war ever chose to create a division of Korea along the 38th parallel — a line that would be revered as a holy thing when North Korean troops later came across it, but dismissed as “imaginary” when U.S. troops crossed it heading north.

The Korean war was to World War II what the anthrax letters were to 9-11 — without it sanity had a real chance; militarism was being scaled back drastically until the Korean war created the excuse for the permanent imperial war economy; but almost nobody even recalls what happened. Even Dean Acheson, who had imposed sanctions on Japan that led to Pearl Harbor and whose decision it was to fight a horrible war in Korea, is almost unknown. In part this is because the war coincided with McCarthyism, and few dared speak the truth about it at the time. In part it is because remembering it brings predominantly shame and disgust. 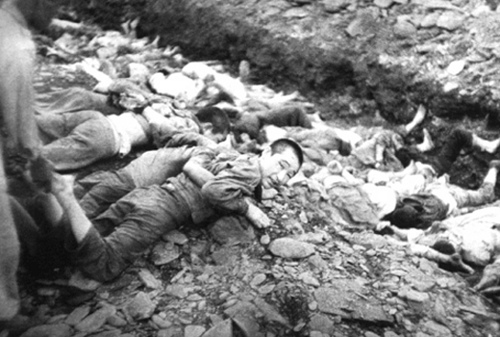 Before the war came the U.S. occupation of the South, the repression of leftists, the massacres of the people by the U.S. and South Koreans, including the slaughter of 30,000 to 60,000 on Jeju Island where South Korea is now building a huge new base for the U.S. Navy. Then came aggression from the South, including a year of raids across the sacred 38th parallel, and the South’s announced intention to invade the North.

When the North invaded the South, the United States falsely blamed the Soviet Union and lied itself together a coalition of the willing at the United Nations by claiming to have captured Russian troops. As soon as U.S. General Douglas MacArthur got the chance, he proceeded, with President Truman‘s approval, right across the 38th and up to the border of China. MacArthur had been drooling for a war with China and threatening it, and asked for permission to attack, which the Joint Chiefs of Staff refused. Eventually, Truman fired MacArthur. Attacking a power plant in North Korea that supplied China, and bombing a border city, was the closest MacArthur got to what he wanted. But the U.S. threat to China, or at least the U.S. threat to defeat North Korea, brought the Chinese and Russians into the war.

During the course of the war, the U.S. bombed flat virtually every city and town in the North and many in the South — three years of carpet bombing with no serious concern for civilian casualties, and the bombing of dams to flood and starve the population. Villages were fire-bombed and napalmed. A New York Times reporter described a village with everyone frozen in place as they had been going about their lives, as in Pompei, but burned to death by napalm. We think of Vietnam as the napalm war, but that was much more so Korea. U.S. and South Korean troops also massacred civilians on the ground. The North committed numerous atrocities as well, but the really big ones, as far as we know, were all on the U.S. side. The U.N. convention on genocide was created while the United States was engaged in that crime against people whom American troops almost universally called “gooks.” Back home the public knew little about the war yet still managed to despise it. Truman’s approval rating set a record low not to be undercut until George W. Bush’s presidency.

The never known “forgotten” war cost Korea two million civilian lives and the United States 37,000 soldiers, while turning Seoul and Pyongyang both into piles of rubble. Many of the dead had been killed at close range, slaughtered unarmed and in cold-blood by both sides. And the border was right back where it had been, but the hatred directed across that border greatly increased. When the war ended, having accomplished no good for anyone but weapons makers, “people emerged from a mole-like existence in caves and tunnels to find a nightmare in the bright of day.”

And no peace was ever formally made. The war officially continues to this day. The U.S. never left the South, never left off keeping the country divided just as prior to the war, never gave up command of the South Korean military, never ceased threatening and provoking the North. The Pentagon’s latest statement of its reason to exist includes North Korea as one of four countries that it admits have no interest in fighting the United States but which nonetheless present “security concerns.”

The people of Korea don’t need any more “help.” Enough is enough. After 70 years, leave them be.

Anticopyright: Editorials and articles originated on TMS may be freely reprinted, disseminated, translated and used as background material, provided an acknowledgement and link to the source, TMS: 70 Years of Korean War, is included. Thank you.

One Response to “70 Years of Korean War”