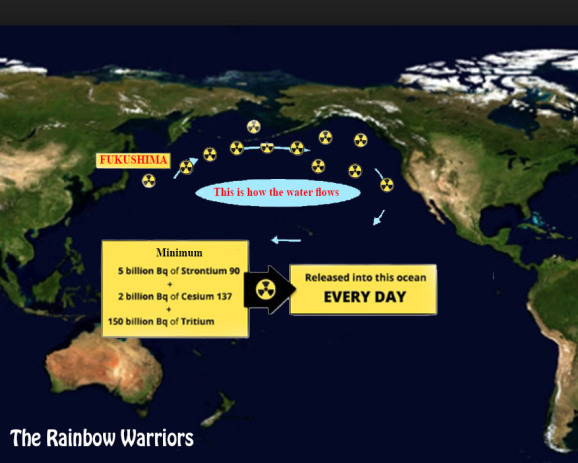 14 Aug 2015 – An article coming from the Yomiuri Shimbun, a pro-government media, its director and Prime Minister Abe are very best friends.

Read between the lines, funny enough the title says it all: the most important part of the Tepco Fukushima Daiichi decommissioning plan is to be able to dump as much contaminated water as possible into the Pacific Ocean.

Mind you Tepco has been already doing that all along since the beginning, but in a sneaky manner. With the now obtained approval of the Fukushima Prefectural Federation of Fisheries Cooperative Associations, Tepco will be able to do it in the open and in a grand manner.

This confirms what we already knew of Tepco’s intentions, somehow Tepco and the Japanese Government since day one have been considering our Pacific Ocean to be their contaminated water private dumpyard.

Why other countries of the Pacific region are not protesting against this constant radioactive water duumping which has been ongoing now for more than 4 years?

The article in question:

Release of Treated Water into Sea a Step toward Fukushima Decommissioning

A solid step has been taken toward the decommissioning of the reactors at Tokyo Electric Power Co.’s Fukushima No. 1 nuclear power plant.

The Fukushima Prefectural Federation of Fisheries Cooperative Associations has approved TEPCO’s plan to release water into the ocean after it has been decontaminated.

Under the plan, TEPCO will pump up water from wells, called subdrains, around reactor buildings at the plant. This water will then be treated and discharged into the sea. There are expectations that this will reduce the volume of contaminated water generated when groundwater accumulates inside buildings wrecked by the March 11, 2011, earthquake and tsunami.

As preconditions for accepting the subdrain plan, the prefectural fisheries federation listed five demands, including improving public channels of information regarding the plan’s stringent water management and safety. These conditions were set out of the federation’s concern about groundless rumors surrounding the plan. TEPCO must sincerely handle these demands and ensure the water release plan is translated into action soon.

Regarding water quality management, TEPCO plans to set a stringent goal of cleaning the water to a level that exceeds international standards for drinking water. It is conducting water purification tests using a special-purpose treatment system. We hope the utility will release this data and carefully explain the system to clear up any anxiety felt by the public.

Initially, the volume of groundwater seeping into the buildings at the nuclear plant reached about 400 tons a day.

Since May 2014, TEPCO has been pumping up groundwater from other wells on the hill near the plant and releasing it into the sea before it flows into the buildings and becomes contaminated. This process has reduced the daily volume of water entering the buildings to about 300 tons a day.

TEPCO believes realization of the plan to pump water from the subdrains and discharging it into the sea after treatment could halve the volume of water entering the wrecked buildings to about 150 tons per day.

Undoubtedly, this will significantly reduce the labor required for managing contaminated water at the plant.

A boost for ‘ice wall’

The fisheries federation stated that the reduced risk of ocean contamination was one reason for its decision to give the green light to the plan.

An impermeable wall has been built along the port in front of the wrecked plant to prevent contaminated water from reaching the sea. The wall contains an opening about 10 meters wide, so it is not completely closed off. The federation viewed the flow of contaminated water through this opening into the port as a problem.

This opening was left because completely blocking off the groundwater would have the effect of a dam, and the water level behind it would rise. There were fears this would increase the volume of water entering the buildings.

By pumping up groundwater through the subdrains, the impermeable wall can be sealed off and any rise in the water level can be prevented. This should help to dispel groundless rumors.

There are also expectations that pumping up groundwater and reducing the water level will enable greater progress in TEPCO’s construction of an “ice wall,” in which soil around the reactor buildings will be frozen to stop groundwater from entering the buildings.

However, even after treated water is discharged into the sea, contaminated water will continue to accumulate. A veritable forest of about 950 large tanks, which combined hold about 690,000 tons of water, already stands within the plant’s premises. Sooner or later, it will become difficult to secure space to install any more tanks.

Purification of the water stored in these tanks is progressing steadily. At some point, discharging this water into the sea also will need to be considered.