Curating antiquities or attending international conferences on archaeology have become capital offenses among some claimed “religious purists.” Two more Syrian nationalists who served all of us by protecting and preserving our global cultural heritage in this cradle of civilization were murdered within the past two weeks just six days apart.

Qassim Abdullah Yehya 37, and Khaled al-Assad 83, were two of the 14 committed professionals serving their country and all of humanity through current and past associations with Syria’s renowned Directorate General of Antiquities & Museums (DGAM).  As with a dozen of their DGAM colleagues before them, Mssrs. Yehya and al-Assad were murdered in the line of duty since the March 2011 Syrian crisis erupted. Today’s latest UN statistics estimate that more than 250,000 Syrians have lost their lives utterly devastating their families and loves one during these past 53 months of nearly unimaginable carnage.

This observer met both gentlemen during the past nearly three years while conducting research on the subject of Syria’s Endangered Heritage. Qassim was the popular well-travelled, especially to Italy where he earned a graduate Degree and consulted on the subject of ancient Mosaics. He was Deputy Director of the DGAM Laboratories when this observer first met him in 2013. At the time Qassim showed me the work he and his team, including gifted “antiquities restoration” students from several institutions of higher learning in Syria who were repairing war-damaged Mosaics from around the country.  Sometimes arriving in plastic bags or heaped into a pile in the trunk of a car or even by Syrian army vehicles, countless thousands of Mosaic chips known as Terrasse, some burned, other shattered or caked in mud or whatever would arrive at his facility deep inside the ancient Damascus Citadel in the Old City for painstaking, Terrasse by Terrasse Mosaic reconstruction.

Our second crossing of paths was earlier this year when the government of Syria, though Dr.  Maamoun Abdel-Karim, a national and international hero for his work as Director-General of DGAM, kindly arranged for Syria’s National Museum, which had been closed for more than two years, and remains so today, to be opened for a few hours. The purpose was to allow this observer, aided by his son Alistair, to examine and photograph the ancient 290 BCE Dura-Europos Synagogue from  Zor which since 1932 has been secured and protected by the Syrian government and fully reassembled inside the vast Museum complex. For the past 18 months I have been trying to visit and research what’s left of the Synagogue at Jobar but the Syrian army replies to each renewed request that it’s still too dangerous. So, the ever understanding Dr. Maamoun, ordered the National Museum opened for me.

Qassim joined us inside the nearly empty of artifacts, and fortified Museum, and provided an enlightening briefing.

Under all sorts of dire and exceptionally dangerous circumstances, Syria’s Directorate General of Antiquities and Museums (DGAM) is carrying out its responsibilities relying on the character and persistence of its 2,500 employees who have the will to defend and preserve Syria’s cultural and national memory and our shared global heritage.

On August 12, 2015 six rockets were fired by rebels near Douma, a close-in eastern Gouta superb of Damascus. They targeted the ancient Citadel of Damascus and the National Museum.  Qassim Abdullah Yahya, was martyred in the attack as he inspected the laboratories of the Directorate of Antiquities inside the citadel. Several employees who were working inside on sundry restoration projects were injured, two seriously. The terrorist attack also caused material but repairable damage to the museum building and to the ancient Citadel of Damascus, which since 1979 has been inscribed on the UNESCO World Heritage List.

Qassim was a highly professional specialist and is remembered by associates for working ever since the start of the current crisis under extremely stressful emergency circumstances including evacuating and documenting museum artifacts. The gentleman will forever be remembered as a hero to all who valued our identity, which is revealed by our shared past. He left a loving wife and three precious young children as well as many grieving colleagues and friends.

Under all sorts of dire and exceptionally dangerous circumstances, Syria’s Directorate General of Antiquities and Museums (DGAM) is carrying out its responsibilities relying on the character and persistence of its 2,500 employees who have the will to defend and preserve Syria’s cultural and national memory and our shared global heritage.

Barely six days after Qassim’s murder another Syrian nationalist in service to all of us for his work in preserving and protecting our shared cultural heritage was brutally murdered on 8/18/2015.

Khaled al-Assad was nearly half a century older than Qassem Yehya yet they were from the same band of brothers and sisters in their work and their shared cultural preservation goals.  From this observers experience these goals are shared by a large part of Syria’s population.

Scholar al-Asaad, who held a diploma in history and education from the University of Damascus, wrote many books and scientific texts either individually or in cooperation with other Syrian or foreign archeologists, SANA said. He also discovered several ancient cemeteries, various caves and the Byzantine cemetery in the garden of the Museum of Palmyra.

His murder has underscored fears that the extremist groups, for whom nothing is sacred, will destroy or loot the 2,000-year-old Roman-era city on the edge of the modern town of the same name, as they have other major archaeological sites in Syria and Iraq.  On 8/20/2015 this observer received a credible report from Palmyra that Da’ish (ISIS) militiamen are currently laying explosives among Palmyra’s ruins as a sort of ‘antiquities shield ‘against armed attack from the Syrian army or from the US-led anti-ISIS coalition, the latter now in its second year of targeting the jihadists with checkered results.

During the morning of 8/18/2015 the psychopaths occupying the area since last May, brought Khaled in a van to a main square packed with shoppers. A militant read out five accusations against al-Asaad, including that he was the “director of pagan idols overseeing, hiding and managing Palmyra’s collection” that he supported Bashar al-Assad, represented Syria “at infidel conferences” and “visited Iran, the Great Satan.”

Immediately another militant unsheathed a knife from his waist and cut scholar al-Assad’s throat like a butcher would a chicken, sheep or goat without so much as grimace according to an eye-witness. A board was put and balanced in front of his dangling body and it enumerated the charges against him. The blood drenched body of this scholar and father of six sons and five daughters was then suspended with red twine by its wrists from a traffic light, his head resting on the ground between his feet, his glasses still on, according to a photo distributed on social media by Da’ish supporters.

As a nephew of Mr. Assad explained yesterday from Palmyra via Skype, “After holding and torturing my uncle for three weeks, Da’ish realized that he knew nothing about where the Museum treasures had been hidden or if he did, as they suspected, that my uncle would say nothing.”   They therefore decapitated the octogenarian.

In May of 2013, Dr. Khalad al- Assad showed this observer and his colleague around the Palmyra National Museum and pointed out, with a sort of pride, the heavy iron gates placed at the front entrance and also several other security measures taken in some of the interior exhibition halls that were designed to protect the collections that were too large to move to safe-houses.   I lacked the courage or perhaps the impoliteness to ask this renowned archaeologist if he really thought such precautions were anything more than thinly cosmetic and whether they would really deter anyone from looting the museum– except perhaps some petty criminals. I have occasionally wondered since that meeting what he thought of the ‘impenetrable’ iron shields in Palmyra’s museum. 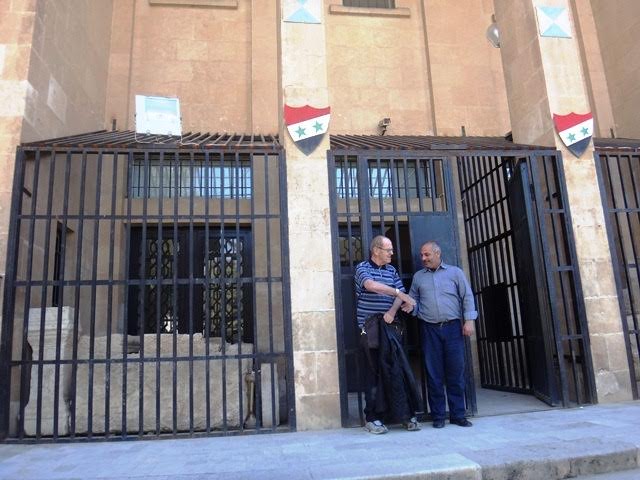 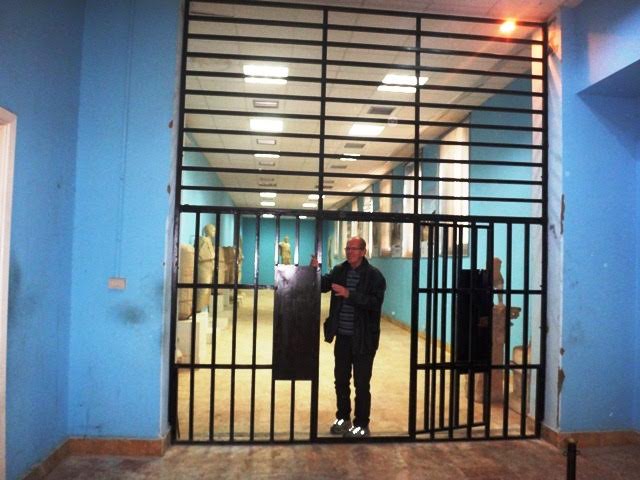 Scholar al-Assad was rightfully proud of his role in hiding and securing Syrian treasures from would-be looters during the current crisis and of the extensive security system he ordered put into place at the National Museum at Palmyra. Thousands of priceless artifacts are still secure and to date undiscovered my Da’ish. In Raqqqa, some DGAM employees took an oath of silence regarding hidden treasures from the Raqqa Museum and one staff member advised this observer that it was an oath to accept death rather than allow their country’s antiquities to be looted and shipped out of Syria.

Khaled al-Assad saw the continuity between Syrian Arab culture and that of the many peoples who had previously inhabited Palmyra and he loved both. He even named his first daughter after Zenobia, the queen of Palmyra who challenged Rome’s rule 1,700 years ago. 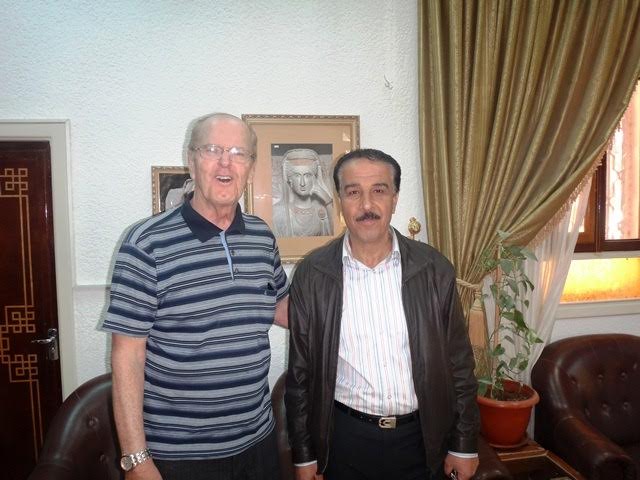 A longtime friend and colleague, who prefers to remain anonymous because he is still visits the area, observed “Khalad had a huge repository of knowledge on the site, and that’s going to be missed. He knew every nook and cranny. That kind of knowledge is irreplaceable, you can’t just buy a book and read it and then have that. There’s a certain personal dimension to that knowledge that comes from only having lived that and been so closely involved in it and that’s lost to us forever. Now it’s lost. We don’t have that anymore.”

According to a report in the current issue of The Economist, last April just before Da’ish invaded Palmyra, “the archaeologist described on a Facebook page the spring rituals that would have taken place in the colonnaded city during Greco-Roman times. Those rituals “fit perfectly” with pre-Islamic Arab ones, he wrote.

Monitoring the resent activities of Da’ish (ISIS) iconoclasm in Iraq and Syria, this observer increasingly senses that blasphemous idol destruction may be lessening a bit.  One perceives that given its budget short-falls, some caused for example  by US-led airstrikes against its oil facilities, that the militants are finding looting and trafficking in Syria’s antiquities ever more profitable and that Syria’s antiquities are more valuable when sold  than when obliterated on camera for  recruitment and publicity purposes.

Regrettably, the global community has not yet been effective in stopping or even significantly putting a dent in this cultural theft trade.

Anticopyright: Editorials and articles originated on TMS may be freely reprinted, disseminated, translated and used as background material, provided an acknowledgement and link to the source, TMS: Two More ‘EverySyrian’ Heroes Murdered while Protecting Our Shared Cultural Heritage, is included. Thank you.