Want a More Democratic UN? Give It a Parliament

Every democracy in the world has an elected legislature. Why not the United Nations? 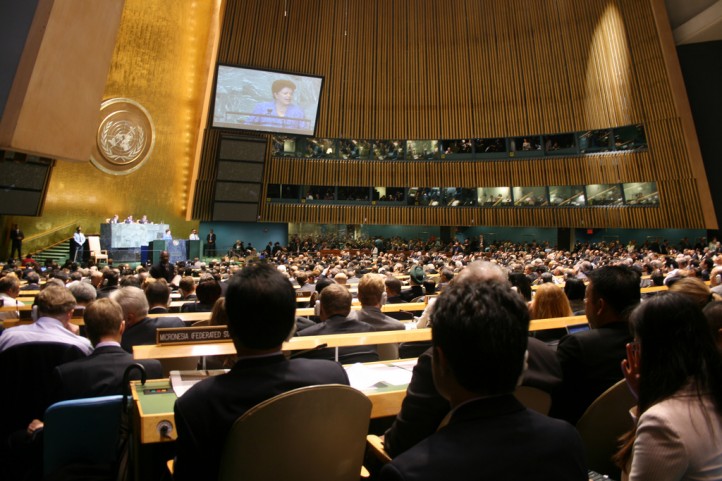 21 Aug 2015 – As we approach the 70th anniversary of the United Nations, we’re moving further into a new century with many of the old, deficient institutions of the last century left untouched.

After two devastating world wars and the horrors of the Holocaust, the United Nations was founded as a means to promote peace and security, human rights, and development. Since then, global challenges have multiplied and intensified. Climate change, social disparity, financial instability, food security, terrorism, and genocide are issues that affect all of the world’s citizens. There is no way back from growing global interdependence.

At the same time, most of the world’s nations have adopted governance structures that are at least nominally democratic. The spread of democracy since 1945 is a revolutionary achievement.

In addition, states have established important regional organizations to facilitate political and economic cooperation, to promote democracy, human rights, and the rule of law, and to deal with other transnational issues.

But the astounding progress of democracy at the national and regional levels has mostly been ignored at the level of international organizations. The emergence of a global society and the diversity of political opinions present in democratic states are not reflected in the machinery of the United Nations.

It is no longer acceptable that UN decision-making primarily, if not exclusively, represents only the executive branch of national governments. The challenges confronting the world community today are challenges that nation-states acting alone cannot solve in an effective, democratic, and legitimate way.

The United Nations and its General Assembly, the most universal body in the international legal order, must now seriously begin to add a more democratic, parliamentary dimension to its formal structure.

It is now widely accepted that representative parliaments are an indispensable element of good and democratic governance. This should apply at the international level as well. The UN needs to practice
what it preaches. If the UN is to continue effectively supporting peace, human rights, and democratic development, it needs to become more inclusive, accountable, transparent and democratic.

Efforts to add a United Nations Parliamentary Assembly, UNPA, in the first years of the UN were not successful. The Cold War threatened human survival, while most of the world’s peoples were governed by autocratic regimes and struggled for liberty, independence, and an end
to colonialism. The world lacked experience with international parliamentary bodies.

Today, the conditions are very different. It may take years to devise a plan and procedures for a fair, democratic, effective, and independent UN Parliamentary Assembly. But it’s now long past time to begin. At first, a UNPA could be composed of representatives of national or regional parliaments. At a later stage, there should be a transition to direct elections.

Global support for the idea is growing. To date, an international appeal for the establishment of a UN Parliamentary Assembly has been signed by 1,400 sitting and former members of parliament from over 100 countries, as well as hundreds of other distinguished personalities from all walks of life, including former UN Secretary-General Boutros Boutros-Ghali.

Last month, the report of the Commission on Global Security, Justice, and Governance, which is co-chaired by former U.S. Secretary of State Madeleine Albright and former Nigerian Foreign Minister Ibrahim Gambari, recommended the establishment of a UN Parliamentary Network as a step towards “the creation of a standing, formally constituted UN second chamber.”

Through a UN Parliamentary Assembly, elected representatives who are accountable to their constituents would be able to play a role in the world organization. They could provide oversight of international decision-making and serve as a link between the world’s citizens, civil society, and the UN.

The assembly would allow for participation of parliamentarians who do not belong to governing parties. It could serve as a platform to give greater voice to minorities, indigenous peoples and nations, and youth and other international stakeholders. It could provide additional international accountability and oversight for government action on the new Sustainable Development Goals.

A UNPA is no panacea. But it would make the UN much more inclusive and strengthen its ability to cope with global challenges.

Jo Leinen, a member of the European Parliament, and Andreas Bummel are co-founders of the Campaign for a UN Parliamentary Assembly.

One Response to “Want a More Democratic UN? Give It a Parliament”