7 Sep 2015 – Prime Minister Shinzo Abe’s government is preparing to ram its widely unpopular security legislation through the Diet, or parliament, this month despite continuing protests and mass opposition. The bills will formalise Abe’s “constitutional reinterpretation” last year to permit so-called collective self-defence—that is, Japan’s military involvement in US wars of aggression.

Further anti-war protests took place last weekend, including in Tokyo’s Shinjuku shopping district on Sunday, as well as the cities of Sendai, Osaka and Fukuoka. 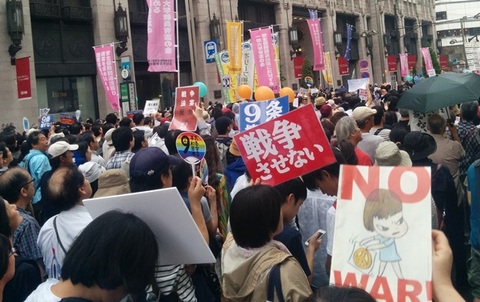 Part of the Tokyo protest

Thousands of people took part in the Shinjuku protest despite the rain. The demonstration was jointly organised by the Students Emergency Action for Liberal Democracy (SEALD) and the Association of Scholars Opposed to the Security-related Bills. Many of those who participated were students and young people, along with academics, workers and pensioners.

Many people carried homemade banners and placards to express their opposition to the Abe government. Slogans such as, “This country has sworn to never wage war again,” and “Unconstitutional,” referred to the fact that the security bills flout Article 9 of the country’s constitution, which formally renounces war forever. Others called for Abe to resign or emphasised that Japanese youth would be drawn into new wars. 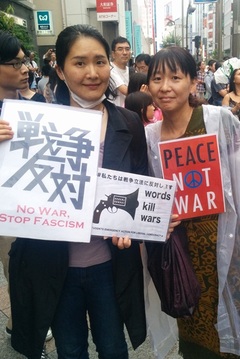 Two of the Tokyo demonstrators

SEALD, which has been active in organising recent anti-war protests, reflects a political radicalisation among young people, who are profoundly alienated from the political establishment. It was formed in 2013 against the Abe government’s anti-democratic state secrets act, which imposes draconian new penalties on whistleblowers and journalists involved in leaking a broad range of government documents.

On August 30, an estimated 120,000 people in Tokyo alone came out to protest against war in a demonstration sponsored by SEALD and a range of anti-war and pacifist groupings and opposition parties. Others joined demonstrations in approximately 300 locations throughout Japan. Protests of this scale have not been seen since 1960, when people took to the streets to opposing the renewed US-Japan Security Treaty pushed through at the time by Abe’s maternal grandfather, Prime Minister Nobusuke Kishi, who was subsequently forced to resign.

SEALD, however, is completely uncritical of capitalism, which is the root cause of militarism and the mounting drive to war by the imperialist powers, including Japan. Instead the group espouses a liberal democratic outlook based on the defence of the existing constitution, including Article 9, and empty appeals for greater social equality. It calls for “liberal forces” beyond “the conventional political framework” to come together to defend “the freedom and democracy of Japan.”

SEALD’s appeal for “all the liberals in Japan to unite” seeks to shackle young people to the political establishment, and the main opposition parties in particular. Yesterday’s rally provided a platform for Democratic Party of Japan (DPJ) upper house member Renho Murata, Japanese Communist Party (JCP) head Kazuo Shii, and Tadatomo Yoshida, leader of the Social Democratic Party, to posture as opponents of war.

In reality, the Japanese constitution has proven no barrier to the rebuilding of the military following the end of World War II or its participation in US-led wars, including the occupations of Afghanistan and Iraq. The constitution has already been “reinterpreted” on many occasions, including to allow the establishment of the so-called Self-Defense Forces (SDF) in 1954, in line with US requirements. 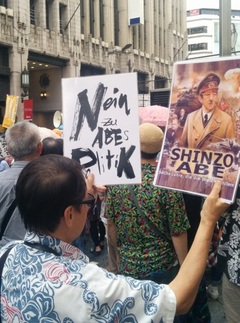 Japan’s parliamentary upper house is currently debating the new security legislation. The ruling Liberal Democratic Party (LDP) and its partner Komeito rammed the bills through the lower house on July 16 and are seeking to pass them before the end of the current Diet session on September 27. Even if the upper house fails to pass the bills, they can be sent back to the lower house 60 days after their initial approval and passed by a two-thirds majority, which the LDP and Komeito hold.

The government is planning to have the bills passed next week—as soon as the 60-day period expires on September 14. The LDP is considering eliminating regional hearings in the Diet to expedite the process. It has currently pegged September 15 to pass the bills through a special committee and then through a full session the next day, bringing the laws into effect.

The bills are comprised of two parts. One bill would allow the SDF to be dispatched anywhere in the world without the passage of a special law or regular extensions from the Diet; only approval from the legislature would be necessary. The second bill contains 10 amendments to current laws that would allow the SDF to provide military assistance to an ally, namely the United States.

In an effort to maintain control of the growing anti-war movement, seven opposition parties, including the DPJ and JCP, met September 4 to discuss a motion of no-confidence in Abe, as well as censures against cabinet members like Defense Minister Gen Nakatani. These moves, which have next to no chance of passing, are aimed maintaining the illusion that the security laws can be blocked in parliament.

The Abe government is enacting “collective self defence” with the backing of Washington, which is seeking to integrate Japan more fully into its “pivot to Asia,” designed to militarily encircle China and undercut its interests in the Asia-Pacific region. The US has encouraged Japan to take a more aggressive stance toward China over the disputed Senkaku/Diaoyu Islands in the East China Sea, thereby painting China as an aggressor and justifying the current security legislation.

While the opposition parties posture as anti-war, the DPJ and JCP have lined up with the Abe government in the dispute over the Senkaku/Diaoyu Islands. While in office in 2012, the DPJ provocatively “nationalised” the islands by purchasing them from their private owner, triggering dangerous moves and counter-moves by the Japanese and Chinese coast guards and military vessels and aircraft. The JCP, while advocating peaceful methods, nevertheless insists that the small rocky outcrops belong to Japan.

The drive to war cannot be halted by appeals to the political establishment and through parliamentary manoeuvres. What is required is complete break from all the parties of the ruling class and the turn to the building of an anti-war movement of the international working class to abolish capitalism and its outmoded nation-state system.