12 Sep 2015 – What happens when a private company with a long history of producing some of the most toxic chemicals on the planet and now produces our food starts facing public pressure from a growing national grassroots movement to label their products to conform with basic principles of democracy and transparency?

Well, if the company in question is Monsanto, then you take a page out of Big Tobacco’s playbook and hatch a secret plan to enlist public university scientists to bury the potential harm of your genetically engineered crops by whitewashing negative studies and systematically demonizing your opponents in the media to mislead elected officials and the American public about the safety of GMOs (genetically modified organisms) and their accompanying toxic pesticides. 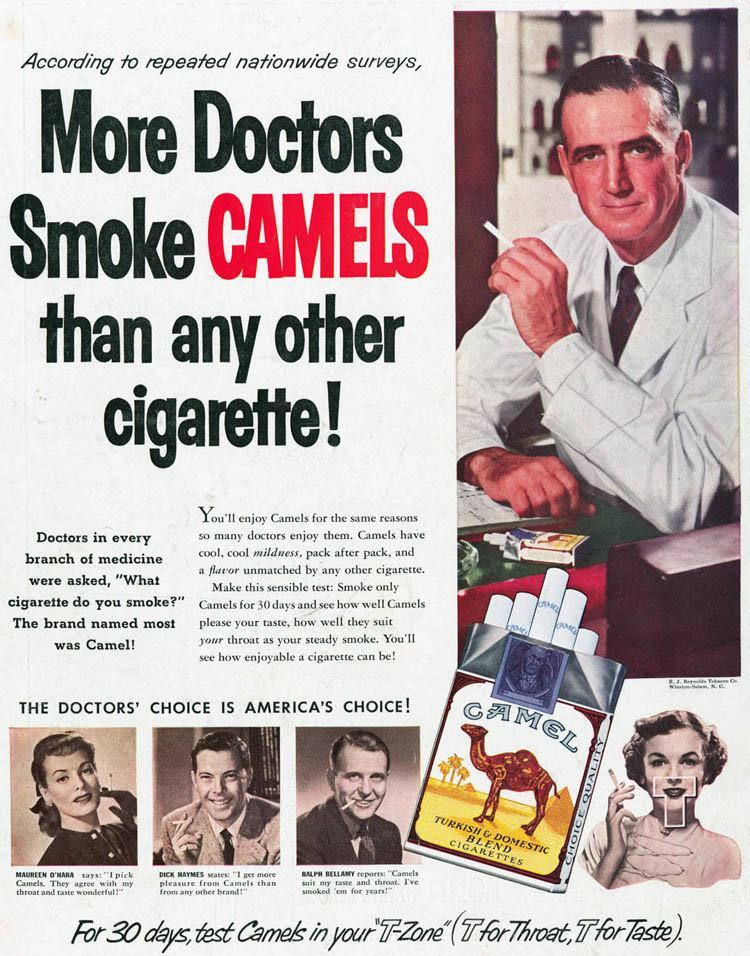 Here’s a little history lesson, in the 1940s, tobacco companies ran ads with doctors proclaiming smoking cigarettes were perfectly safe. In 1946, the RJ Reynolds Tobacco Company ran a now infamous campaign called “More Doctors” recommend Camels after “surveying” more than 113,597 doctors “from every branch of medicine.” In reality, the tobacco company’s advertising agency employees questioned doctors at medical conferences and their offices and used these fake results to deceive a generation of smokers.

Today, Monsanto and the biotech industry are copying the same tactics, this time hiding behind the façade of public university scientists and hiring major PR firms to promote GMOs and the toxic weedkiller glyphosate, the main chemical ingredient in Roundup, which some scientists are offering to drink on Twitter and in front of classrooms of students to “prove” its safety and hide the fact that it is harmful to humans and the environment.

Last weekend, the New York Times released a stunning expose of how Monsanto and the biotech industry enlisted allegedly independent public university scientists in a deceptive campaign to lobby state legislators in Pennsylvania, interfere with ballot initiatives in Oregon and Colorado and paper over risks of high pesticide usage on the Hawaiian island of Kauai.

According to New York Times  investigative reporter Eric Lipton, as the GMO labeling debate was coming to a boil in America in the past three years, Monsanto and their “industry partners retooled their lobbying and public relations strategy to spotlight a rarefied group of advocates: academics, brought in for the gloss of impartiality and weight of authority that come with a professor’s pedigree.”

And why would Monsanto want to do this? Because independent scientist from public university come with a major halo effect, something that Monsanto’s top lobbyists mention repeatedly in the recently released emails to public university scientists.

Lipton’s story details how a University of Illinois professor and longtime GMO promoter Bruce Chassy used his Monsanto connections to lobby the Environmental Protection Agency to abandon its efforts to tighten regulations on insecticidal GMO seeds. If you take a dive into the emails, you can see how Chassy enlisted the help of former advisor to George W. Bush and Hillary Clinton, Nina Federoff in his efforts to influence the EPA’s policies.

In the emails, Chassy’s efforts to lobby the EPA for looser regulations were encouraged by a Monsanto lobbyist even as Chassy was negotiating the release of his grant from the company.

For background on how this current story originally broke, you have to go back to Aug. 6, when the international science journal Nature reported that more than 4,600 pages of emails from University of Florida plant scientist Kevin Folta “reveal his close ties to the agriculture giant Monsanto … and other biotechnology-industry interests.”

The Nature article set off a minor firestorm on social media, when University of Florida professor and Monsanto promoter Kevin Folta’s emails were leaked to Nature’s Keith Kloor for damage control.

While Folta has not yet been charged with scientific misconduct or wrongdoing, these emails reveal a close relationship and financial ties to Monsanto for the first time publicly. The new reports of financial ties and Folta’s regular communication with Monsanto executives and lobbyists contradict Folta’s previous repeated denials of any relationship or conflict of interest with the St. Louis, Missouri based biotech seed and chemical giant responsible for mass producing such toxic cancer-causing chemicals as PCBs, Agent Orange, dioxin and now 80 percent of the genetically engineered crops that appear in our food supply.

“The documents show that Monsanto paid for Folta’s travel to speak to U.S. students, farmers, politicians and the media,” according to Nature’s Keith Kloor. As reported, Folta received a $25,000 “unrestricted” grant from Monsanto in 2014, which a Monsanto representative stated could be used by Folta at his “discretion in support of your research and outreach projects.”

The information regarding Monsanto’s $25,000 donation only became public as a result of a Freedom of Information Act (FOIA) request by the public advocacy group U.S. Right to Know, who made the request after noticing Folta’s frequent responses on a pro-GMO industry run website, which is funded by the members of The Council for Biotechnology Information and includes BASF, Bayer CropScience, Dow AgroSciences, DuPont, Monsanto and Syngenta.

According to the emails released by the New York Times, Kevin Folta appears eager to please Monsanto’s executives, telling them, “I’m glad to sign on to whatever you like, or write whatever you like” and, in order to get his $25,000 check cleared Folta claims, “I am grateful for this opportunity and promise a solid return on the investment.” What kind of investment was Monsanto really making?

In addition, the emails reveal a near constant communication between Kevin Folta, Monsanto’s top lobbyists, the crisis public relations firm Ketchum and a handful of U.S. scientists working behind the scenes to manipulate public perception on the safety of GMOs and Monsanto’s flagship herbicide Roundup dating back to at least 2013.

The emails between Folta, Monsanto and Ketchum PR are especially damning as they indicate that agents from the New York crisis management PR firm wrote answers specifically for Folta that he then cut and paste and posted on the GMO Answers website under his own name. A quick search of Folta’s public responses on the industry run website show that he began responding to questions about GMO technology on the website in July of 2013.

GMO Answers, lists Folta as an “Independent Expert” and a professor and chairman of the Horticultural Sciences Department at the University of Florida. One wonders what Professor Folta or the University of Florida would do if they caught Monsanto and Ketchum PR agents writing papers or scientific studies for their students which they submitted under their own names. In most cases this would result in plagiarism charges for the students and a potential dismissal from the university, but for Kevin Folta posting canned PR responses resulted in Monsanto writing a $25,000 check for what Folta claims is for his personal “science communication” fund.

For the past several years, Kevin Folta has made repeated claims that he was not linked, in any way, to Monsanto and he has made vicious attacks on anyone who insinuated otherwise on social media. But the content of these emails reveals otherwise.

In a recent June 4 interview with actor/comedian Joe Rogan, Folta was so bold as to claim “I have nothing to do with Monsanto” and “I am not a shill,” which produced a hearty chuckle from Rogan and a knowing grin from Folta himself.

By this time, Folta had been in close communication with Monsanto’s top lobbyists and executives for more than 3 years and had already started spending the $25,000 “unrestricted grant” from Monsanto. So why the cover-up?

Rather than look at the new report objectively, Kevin Folta sneeringly dismissed it and then offered to drink a pint of glyphosate in front of a class of students at Iowa State University that he was supposedly educating with his “science communication” skills. As an Iowan, I’m pretty sure that the ISU students were too smart to fall for this stupid stunt.

According to the British watchdog group GMWatch, which has documented Folta’s repeated attacks on GMO critics and false statements his claims about the safety of glyphosate are simply dead wrong.

This wouldn’t be such a big deal if Folta was just another self-promoting blowhard on the Internet, but with Monsanto’s backing and close ties to a PR firm like Ketchum, these compromised public university scientists now have big media access and are being used as pawns to promote the safety of Monsanto and the biotechnology industry’s products.

For the first time now, with these public records requests, Americans concerned about how their food is produced are getting a firsthand look at the secret tactics of how corporations like Monsanto use PR firms and public university scientists to put a deceptive spin on potential safety issues of GMOs and pesticides.

In reality, this recently revealed collusion between Monsanto and public university scientists poisons the public dialogue and puts the health and safety of the American public at risk by using tobacco industry tactics.

In 1994, seven tobacco executives testified in front of Congress denying they manipulated their brand’s formula to make cigarettes addicting and mislead members of Congress about the scientific evidence linking their products to cancer. Exactly twenty years later, on December 10, 2014, a group of biotech industry apologists followed the same script while testifying in Congress to try to block reasonable and common sense GMO labeling laws, which more than 90 percent of Americans regularly support in public opinion polls.

Make no doubt about it, Monsanto’s current efforts to recruit public university scientists are not about communicating science, but to manipulate public opinion just like the tobacco industry.

The tragedy of this scenario is that taxpayers are indirectly helping fund a public disinformation campaign that is ultimately bent on denying them their basic right to know what’s in their food and derail the national movement to label genetically engineered foods. One wonders how much longer Big Tobacco would have been able to deceive Congress and the American public with a few more “independent scientists” like Chassy and Folta on hand.

Dave Murphy is the founder and executive director of Food Democracy Now!, a grassroots movement of more than 650,000 American farmers and citizens dedicated to reforming policies relating to food, agriculture and the environment.