Credit Suisse Wealth Report: There Are More Poor People in America Than in China

14 Oct 2015 – This is a wonderfully counter intuitive finding from the new Credit Suisse Wealth Report. There’re more poor people in America than there are in China. No, really, this is true, when measuring by wealth. We’ve not got the detailed number of the United States alone as they’re offering the information by region. But Canada’s population size means that we don’t have to worry about that very much (sorry, Canadians). To a reasonable level of accuracy there’s no one in China in the bottom 10% of the world’s population by wealth. And yet there’s some 10% of those global poor in North America, and another 20% or so in Europe. So, yes, it really is true that there’re more poor people in America (and Europe) than there are in China.

Which, when you think about it, is really very odd indeed. Because China has more people than those two other regions put together and it’s also much poorer than those two regions put together. So, we really would think that there’re more poor people in China than there are in the United States. So what’s causing this? Inequality? The impositions of the capitalist plutocracy? Something that Bernie or Hillary can sort out for us?

No, it’s that the US and Europe have developed financial and banking systems, in a manner which most of the rest of the world doesn’t really, at least not yet. Here’s the fun chart: 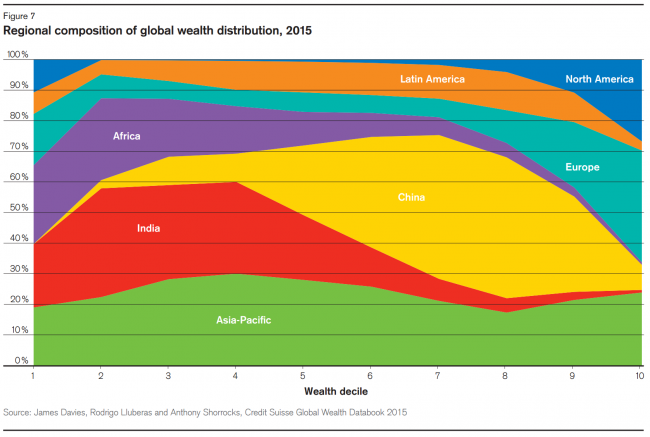 Yet we know very well that America and Europe are very much richer than China. So, what’s going on? Is it all just that the wealth is being taken by the plutocrats in our deeply unfair and unequal societies? No, it isn’t. Because we’ve got to understand what this number actually is. It is wealth, not income. And it is also net wealth, that is the value of all assets minus the value of all debts. As the report makes clear:

“To determine how global wealth is distributed
across households and individuals – rather than
regions or countries – we combine our data on the
level of household wealth across countries with
information on the pattern of wealth distribution
within countries. Once debts have been subtracted,
a person needs only USD 3,210 to be among the
wealthiest half of world citizens in mid-2015.
However, USD 68,800 is required to be a member
of the top 10% of global wealth holders, and
USD 759,900 to belong to the top 1%. While the
bottom half of adults collectively own less than 1%
of total wealth, the richest decile holds 87.7% of
assets, and the top percentile alone accounts for
half of total household wealth.”

So, how do we end up with all those poor people, poor in wealth that is, in those rich countries? Because of this:

It is possible to have negative wealth. To have debts that are greater than your assets. But this is only possible in a reasonably advanced society, where there’s a financial and banking system that will lend to people without assets. And that’s what that negative wealth is. Part of the financial life cycle rather than evidence of great poverty. For example, that newly minted Harvard graduate, carrying perhaps $150k of debt and now coining it on Wall Street as a junior analyst would be counted, in this wealth measurement, as being in those poorest 10% of the world. Those poor people in India and Africa aren’t poor in this same manner. They’re the people standing there with their labour and the clothes on their back and nothing else. But the people in the rich countries who are in that bottom 10 and 20% of the world’s wealth distribution are simply people with more debt than assets. And the reason there’re no Chinese in there is because the Chinese financial system doesn’t work that way. Mortgages, student loans and so on pretty much don’t exist: so there’s no one with negative wealth.

Which is how we get to those numbers. And then we have to acknowledge that these numbers are all entirely wrong. Not because Credit Suisse has made a mistake: they are following the accepted definitions all the way through. It’s that those accepted definitions themselves are wrong. Because we only count financial wealth and we only count some kinds of it. Housing wealth (equity, so house value minus any mortgage), financial assets (stocks and bonds etc), other assets (furniture etc) and private pension savings. We are not including, for example, any valuation of future Social Security benefits. Nor any value of human capital: that Harvard degree (if it was in, say, puppetry) might not be worth what was paid for it but it’s worth something. Nor what is the greatest source of wealth for everyone in the developed countries: that happenstance that we were born into developed countries. Countries where if we go broke the children will still get educated, we’ll still get medical care, food, shelter and all the rest: the value, in short, of being a citizen of a country with a developed welfare state.

Tim Worstall – I have opinions about economics, finance and public policy. I’m a Fellow at the Adam Smith Institute in London, a writer here and there on this and that and strangely, one of the global experts on the metal scandium, one of the rare earths. An odd thing to be but someone does have to be such and in this flavour of our universe I am. I have written for The Times, Daily Telegraph, Express, Independent, City AM, Wall Street Journal, Philadelphia Inquirer and online for the ASI, IEA, Social Affairs Unit, Spectator, The Guardian, The Register and Techcentralstation. I’ve also ghosted pieces for several UK politicians in many of the UK papers, including the Daily Sport.

One Response to “Credit Suisse Wealth Report: There Are More Poor People in America Than in China”