8 Oct 2015 – A jury has found Dupont liable for negligence in the case of Carla Bartlett, taking less than a day to award $1.6 million to the Ohio woman who developed kidney cancer after drinking water contaminated with a chemical formerly used to make Teflon. The jury declined to give Bartlett punitive damages in the federal case. Instead, the award included $1.1 million for negligence as well as $500,000 for emotional distress.

“This is brilliant,” one of Bartlett’s attorneys, Mike Papantonio, said of the verdict. “It’s exactly what we wanted.” Papantonio emphasized that Bartlett’s case, the first of more than 3,500 personal injury and wrongful death suits filed on behalf of people in West Virginia and Ohio who were exposed to C8, had been chosen by DuPont as the first to be tried and involved less egregious injuries than many others yet to be heard.

“They picked this case with the idea that it was the most winnable. Strategically they never dreamed we’d win this case,” said Papantonio, who predicts that other C8 suits in the pipeline will result in punitive damages. “Really, it’s just a matter of time.”

In a statement, DuPont said it expected to appeal the verdict and emphasized that “safety and environmental stewardship are core values at DuPont.”

CARLA BARTLETT LIVED much of her life in Coolville, Ohio, a tiny town a few miles across the Ohio River from a DuPont plant in Parkersburg, West Virginia. After years of drinking water that had been contaminated with C8, Bartlett, who is now 51, was diagnosed with a tumor on her kidney in 1997 and underwent a painful surgery that involved removing part of one of her ribs along with the tumor.

Bartlett’s attorneys argued that while she and tens of thousands of people living near Parkersburg, West Virginia, were drinking water contaminated with C8, DuPont was actively working to ensure they didn’t “connect the dots” about the chemical. One DuPont PowerPoint presented by Papantonio described the company’s strategy of keeping sensitive information from government agencies, community organizations, and “disgruntled employees.”

DuPont’s lawyers, for their part, denied any responsibility for Bartlett’s illness. “Nobody at DuPont expected that Mrs. Bartlett or anyone else in the community would be hurt,” said Damond Mace, who emphasized that the company couldn’t have predicted that scientists would find a probable link between C8 and kidney cancer, as they did in 2012.

Bartlett’s attorneys responded with voluminous internal communications showing the company did in fact foresee the damage they would later inflict. In one DuPont document, a summary of a 1984 meeting about C8, a DuPont employee concluded that “we are already liable for the past 32 years of operation.”

The presentation of historical documents was designed to convince the jury that the company acted irresponsibly, even given the information that was available before Bartlett’s diagnosis. Bartlett’s lawyers laid out a clear timeline that began in the 1950s, when DuPont first learned of the chemical’s potential toxicity. By 1966, some DuPont employees realized that C8 was seeping into groundwater. By 1980, after the company instituted regular testing of its own employees, DuPont had evidence that C8 was present in workers’ blood — and within two more years there was evidence that the contamination persisted in human tissues. By 1984, according to testimony, DuPont’s own testing had established that C8 had leaked into local drinking water. In 1989, DuPont knew that C8 caused testicular tumors in rats — and even classified C8 as a possible carcinogen. But rather than reporting these developments, Mike Papantonio told the jury, “They hid this information from the public for at least 16 years.” 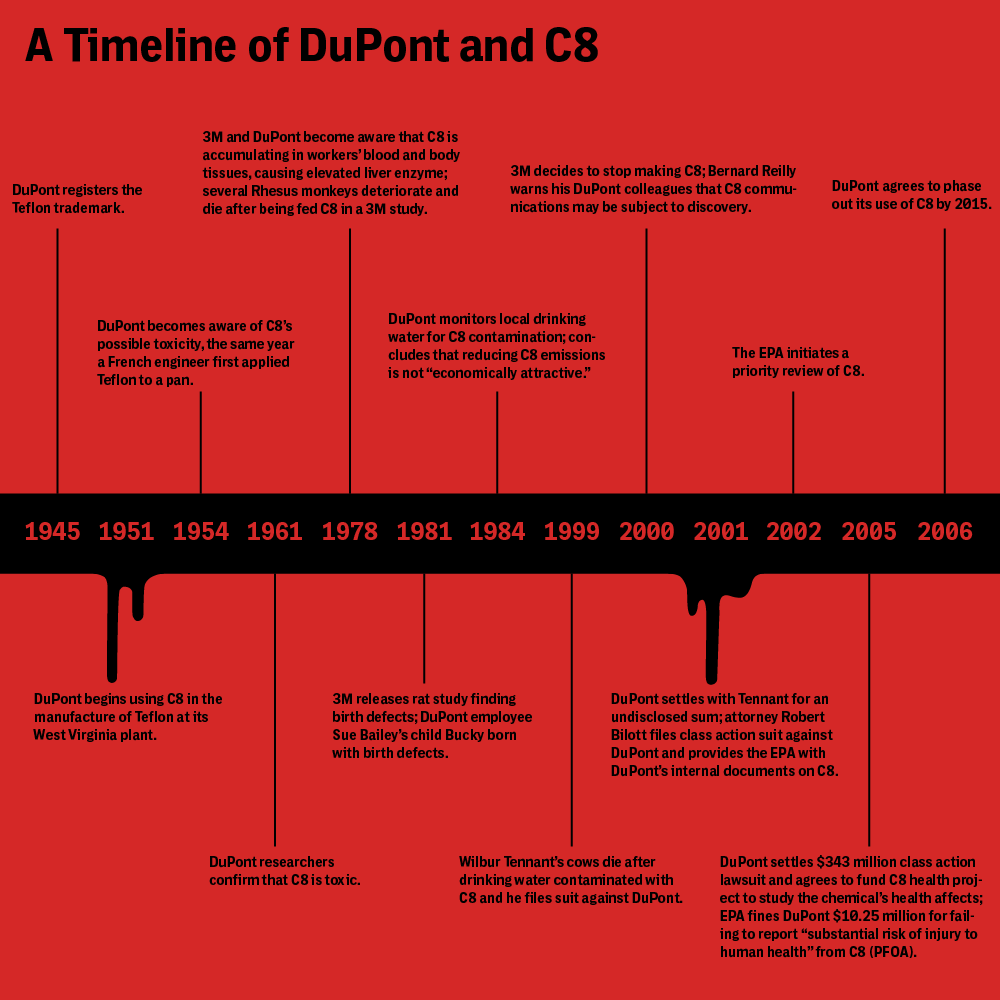 At any of these junctures, DuPont might have decided to stop using the chemical, said Papantonio, who repeatedly referred to a graph showing the spread of C8 contamination in the Ohio River, along with mounting evidence of the chemical’s harm. Instead, he emphasized in his closing arguments, DuPont actually increased production for years, even as it learned more about the dangers the chemical posed.

The company could have easily disposed of its C8 waste differently, Bartlett’s attorneys argued. As evidence, they produced a 1985 memo and a manufacturer’s information sheet from 3M, the company that sold C8 to DuPont until 2000, both of which clearly stated that the chemical should have been either incinerated or placed in a landfill designed for hazardous waste. Bartlett’s lawyers also revealed documents showing that DuPont did in fact follow 3M’s directive in its facilities in Japan, China, and the Netherlands, where it burned C8 waste.

In Parkersburg, however, DuPont chose to pump C8 through its smokestacks, bury it in unlined landfills, and dump up to 50,000 pounds a year directly into the Ohio River. The attorneys also presented evidence that switching to incineration would have cost the Parkersburg plant less than .2 percent of its annual operating costs. “The only reason they didn’t do it was because they wanted to save money,” Papantonio told the jury. Later, he added: “We wouldn’t be here today if it were incinerated.”

ARGUABLY THE MOST MOVING testimony came from Bartlett herself, a mother of two who described her daily routine of drinking iced tea that she unwittingly made with contaminated water, the physical pain of her ordeal, and her fear of a recurrence. Bartlett cried while on the stand and traced a huge line across her body where she has a scar from her surgery, saying, “It’s very big, and it’s very ugly.”

But it was testimony from two of DuPont’s own witnesses, who admitted to having high levels of C8 in their own bodies, that may have been even more damaging. Anthony Playtis, who was occupational health coordinator at the DuPont plant in Parkersburg, said that in 1994 C8 was measured in his blood at 400 parts per billion (ppb), a level that is roughly 100 times the national average. The retired DuPont worker went on to dismiss the notion that the measurement was cause for concern. “I knew there were a lot of other people who had much higher levels, and so I didn’t think mine was anything to worry about,” he said. Also, Playtis noted, “Everything is toxic.”

As part of a group of DuPont employees who measured C8 levels in local drinking water, Playtis took a sample from his home in 1988 that measured 2.2 ppb — more than double the safe level the company had set internally. But neither he nor anyone else at DuPont reported the elevated C8 readings to the public or to regulators until 1999. During those years, local children were splashing in backyard pools and community members were watering their vegetable gardens with the stuff.

Another former DuPont employee, Paul Bossert, who served as plant manager in Parkersburg from 2000 to 2005, made a point of mentioning that he drank the plant’s water, which had elevated levels of C8, and acknowledged that the chemical had been measured in his own blood at 85 ppb. Upon cross-examination, however, Bossert admitted that he had high cholesterol and a potentially cancerous “spot” on his kidney. Both conditions are among the six approved by a panel of scientists as grounds for personal injury cases such as Bartlett’s.

The jury didn’t have to make a decision about whether Bossert’s health conditions were caused by C8, but they did have to try to determine if the chemical caused Bartlett’s cancer, and they were given specific instructions about how to do so. According to the terms of a 2005 class-action settlement over the contamination that spawned these cases, they had to accept as fact that drinking C8 for at least a year at the level of .05 ppb or above, as Bartlett did, can cause cancer.

Although DuPont’s attorneys were not permitted to dispute the fact that C8 can cause cancer, they did question whether it had caused Carla Bartlett’s particular illness. “Just because C-8 is capable of causing cancer does not mean that it did cause Mrs. Bartlett’s kidney cancer,” DuPont attorney Damond Mace said. Instead, he argued that Bartlett’s cancer that was caused by her obesity.

The $1.6 million verdict is only one of several problems now facing DuPont. Since March the company’s stock is down more than 30 percent, and on Monday CEO Ellen Kullman announced she was stepping down, leaving DuPont without a succession plan.

Some observers who are familiar with the company’s long history in Parkersburg believe Kullman’s departure is tied to C8. Jeffrey Dugas, campaign manager of Keep Your Promises DuPont, a local nonprofit devoted to holding the company accountable, said the company’s mishandling of the chemical — the contamination, the cover-up, and now the bruising legal fight that just concluded in Columbus — hasn’t served anyone well.

“This whole process of trying to wiggle out of its responsibilities has hurt everyone involved,” said Dugas. “The latest victim is Ellen Kullman. But mid-Ohio residents have been suffering for over a decade.”

As the first of six bellwether cases, Bartlett’s verdict is seen as an important predictor of the thousands of C8 claims that may yet come to trial. The next case, in which the plaintiff has ulcerative colitis, is scheduled to be heard in Columbus in late November. The future of Chemours, the chemical company that was recently spun off from DuPont, may also hinge on the outcome of these trials.

With C8 present in water far beyond the Ohio Valley, where Bartlett and other plaintiffs in the current crop of plaintiffs were contaminated, the implications of the Bartlett case may be far wider. Papantonio, who tried some of the first asbestos cases, sees that litigation, which has cost industry more than $50 billion to date, as a possible model.

“This is starting out just like those cases,” said Papantonio. “If I was in charge of this company, I’d be worried.”

For More on C8 and Dupont, See The Intercept’s 3-Part Investigation.