Survival of the Nicest? A New Theory of Our Origins Says Cooperation-Not Competition-Is Instinctive

Check Out the Other Theory of Evolution 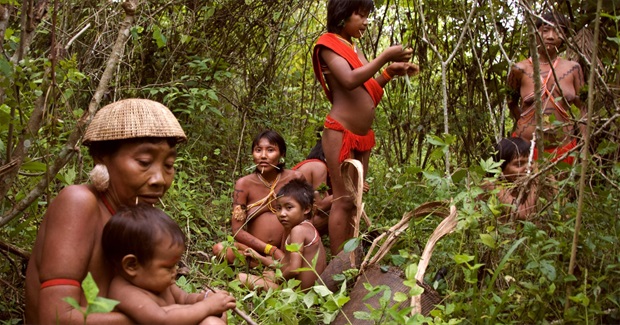 A century ago, industrialists like Andrew Carnegie believed that Darwin’s theories justified an economy of vicious competition and inequality. They left us with an ideological legacy that says the corporate economy, in which wealth concentrates in the hands of a few, produces the best for humanity. This was always a distortion of Darwin’s ideas. His 1871 book The Descent of Man argued that the human species had succeeded because of traits like sharing and compassion. “Those communities,” he wrote, “which included the greatest number of the most sympathetic members would flourish best, and rear the greatest number of offspring.” Darwin was no economist, but wealth-sharing and cooperation have always looked more consistent with his observations about human survival than the elitism and hierarchy that dominates contemporary corporate life.

Nearly 150 years later, modern science has verified Darwin’s early insights with direct implications for how we do business in our society. New peer-reviewed research by Michael Tomasello, an American psychologist and co-director of the Max Planck Institute for Evolutionary Anthropology in Leipzig, Germany, has synthesized three decades of research to develop a comprehensive evolutionary theory of human cooperation. What can we learn about sharing as a result?

Tomasello holds that there were two key steps that led to humans’ unique form of interdependence. The first was all about who was coming to dinner. Approximately two million years ago, a fledgling species known as Homo habilis emerged on the great plains of Africa. At the same time that these four-foot-tall, bipedal apes appeared, a period of global cooling produced vast, open environments. This climate change event ultimately forced our hominid ancestors to adapt to a new way of life or perish entirely. Since they lacked the ability to take down large game, like the ferocious carnivores of the early Pleistocene, the solution they hit upon was scavenging the carcasses of recently killed large mammals. The analysis of fossil bones from this period has revealed evidence of stone-tool cut marks overlaid on top of carnivore teeth marks. The precursors of modern humans had a habit of arriving late to the feast.

However, this survival strategy brought an entirely new set of challenges: Individuals now had to coordinate their behaviors, work together, and learn how to share. For apes living in the dense rainforest, the search for ripe fruit and nuts was largely an individual activity. But on the plains, our ancestors needed to travel in groups to survive, and the act of scavenging from a single animal carcass forced proto-humans to learn to tolerate each other and allow each other a fair share. This resulted in a form of social selection that favored cooperation: “Individuals who attempted to hog all of the food at a scavenged carcass would be actively repelled by others,” writes Tomasello, “and perhaps shunned in other ways as well.”

This evolutionary legacy can be seen in our behavior today, particularly among children who are too young to have been taught such notions of fairness. For example, in a 2011 study published in the journal Nature, anthropologist Katharina Hamann and her colleagues found that 3-year-old children share food more equitably if they gain it through cooperative effort rather than via individual labor or no work at all. In contrast, chimpanzees showed no difference in how they shared food under these different scenarios; they wouldn’t necessarily hoard the food individually, but they placed no value on cooperative efforts either. The implication, according to Tomasello, is that human evolution has predisposed us to work collaboratively and given us an intuitive sense that cooperation deserves equal rewards.

The second step in Tomasello’s theory leads directly into what kinds of businesses and economies are more in line with human evolution. Humans have, of course, uniquely large population sizes—much larger than those of other primates. It was the human penchant for cooperation that allowed groups to grow in number and eventually become tribal societies.

Humans, more than any other primate, developed psychological adaptations that allowed them to quickly recognize members of their own group (through unique behaviors, traditions, or forms of language) and develop a shared cultural identity in the pursuit of a common goal.

“The result,” says Tomasello, “was a new kind of interdependence and group-mindedness that went well beyond the joint intentionality of small-scale cooperation to a kind of collective intentionality at the level of the entire society.”

What does this mean for the different forms of business today? Corporate workplaces probably aren’t in sync with our evolutionary roots and may not be good for our long-term success as humans. Corporate culture imposes uniformity, mandated from the top down, throughout the organization. But the cooperative—the financial model in which a group of members owns a business and makes the rules about how to run it—is a modern institution that has much in common with the collective tribal heritage of our species. Worker-owned cooperatives are regionally distinct and organized around their constituent members. As a result, worker co-ops develop unique cultures that, following Tomasello’s theory, would be expected to better promote a shared identity among all members of the group. This shared identity would give rise to greater trust and collaboration without the need for centralized control.

Moreover, the structure of corporations is a recipe for worker alienation and dissatisfaction. Humans have evolved the ability to quickly form collective intentionality that motivates group members to pursue a shared goal. “Once they have formed a joint goal,” Tomasello says, “humans are committed to it.” Corporations, by law, are required to maximize profits for their investors. The shared goal among corporate employees is not to benefit their own community but rather a distant population of financiers who have no personal connection to their lives or labor.

However, because worker-owned cooperatives focus on maximizing value for their members, the cooperative is operated by and for the local community—a goal much more consistent with our evolutionary heritage. As Darwin concluded in The Descent of Man, “The more enduring social instincts conquer the less persistent instincts.” As worker-owned cooperatives continue to gain prominence around the world, we may ultimately witness the downfall of Carnegie’s “law of competition” and a return to the collaborative environments that the human species has long called home.

Eric Michael Johnson wrote this article for How Cooperatives Are Driving the New Economy, the Spring 2013 issue of YES! Magazine. Eric is a doctoral student in the history of science at the University of British Columbia. His research examines the interplay between evolutionary biology and politics.

One Response to “Survival of the Nicest? A New Theory of Our Origins Says Cooperation-Not Competition-Is Instinctive”