A Milestone for Myanmar’s Democracy

12 Nov 2015 – Democracy may finally be taking hold in Myanmar. The evidence lies in a crushing electoral victory by Daw Aung San Suu Kyi and her party last Sunday in the country’s first free election in a quarter century — a verdict so decisive that the military, which refused to accept similar results in 1990 and placed Ms. Aung San Suu Kyi under house arrest for 15 years, has indicated that this time it will not interfere. Though the vote count is not complete, preliminary data suggests that her National League for Democracy won the most seats in the upper house of Parliament and leads in the regional assemblies.

But the elections are just a beginning. Myanmar is still at the start of what will be a difficult transition from an isolated military dictatorship to a more open society. Whether that can be accomplished peacefully will be a challenge for both the generals who have run the country for decades as well as Ms. Aung San Suu Kyi.

One hurdle is that while her party is likely to dominate Parliament and the executive branch, three large and powerful ministries — interior, defense and border security — will remain under the military. The generals, who came to power in 1962 after overthrowing a civilian government, made sure when they wrote a new Constitution in 2008 to maintain a grip on these three levers. 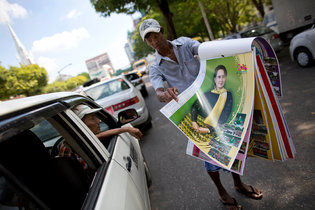 The 2008 Constitution also bars Ms. Aung San Suu Kyi, a Nobel laureate, from becoming president, because her children are foreign nationals. Nobody doubts that this twisted provision was aimed at excluding her from the nation’s top job. Even so, dismissing the Constitution as “very silly,” she has asserted defiantly that she will be “making all the decisions” behind the scenes.

That is very bold language. It is also troubling and not particularly shrewd. The implication is that the next president will be a compliant member of her party and the Constitution can be ignored. But the success of Myanmar’s democratic evolution will depend on Ms. Aung San Suu Kyi working with the military, which under the Constitution is guaranteed 25 percent of the seats in Parliament. Bringing about changes in the Constitution that would put the security ministries under civilian control, and allow her to run for president, will require the support of 75 percent of Parliament. Simple arithmetic says that her ambitions depend on getting along with the generals.

Sunday’s election created a new reality in Myanmar; to maximize it, Ms. Aung San Suu Kyi needs all the help she can get.

A version of this editorial appears in print on November 13, 2015, in The International New York Times.