27 Oct 2015 – The post-Charlie Hebdo “free speech” march in Paris was a fraud for multiple reasons, as I wrote at the time. It was led by dozens of world leaders, many of whom imprison or even kill people for expressing prohibited views. It was cheered by many Westerners who feign upset only when free speech abridgments are perpetrated by Muslims, but not — as is far more common — by their own governments against Muslims.

Worst of all, the march took place in a country that is one of the most hostile to free speech rights in the West, as France quickly demonstrated in the days after the march by rounding up and prosecuting Muslims and other anti-Israel activists for the political views they expressed. A great, best-selling book by French philosopher Emmanuel Todd released this year argues that these “free speech” marches were a “sham,” driven by many political sentiments — nativism, nationalism, anti-Muslim bigotry — that had nothing to do with free speech. 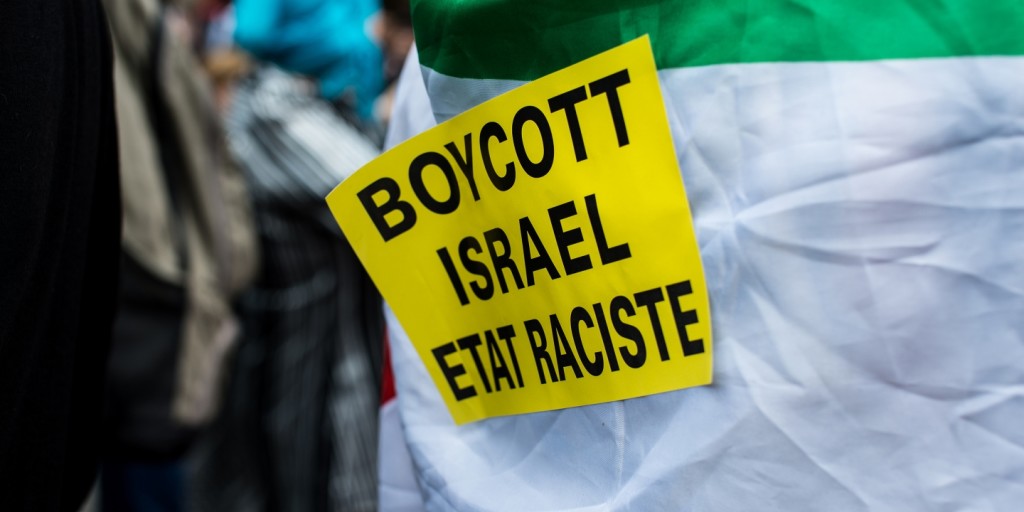 The absurdity of France’s celebrating itself for free expression was vividly highlighted by this week’s decision from that nation’s highest court, one that is a direct assault on basic free speech rights. The French high court upheld the criminal conviction of 12 political activists for the “crime” of advocating sanctions and a boycott against Israel as a means of ending the decades-long military occupation of Palestine. What did these French criminals do? This:

The individuals arrived at the supermarket wearing shirts emblazoned with the words: “Long live Palestine, boycott Israel.” They also handed out fliers that said that “buying Israeli products means legitimizing crimes in Gaza.”

In France — self-proclaimed Land of Liberté — doing that makes you a criminal. As The Forward reported, the court “cited the French republic’s law on Freedom of the Press, which prescribes imprisonment or a fine of up to $50,000 for parties that ‘provoke discrimination, hatred or violence toward a person or group of people on grounds of their origin, their belonging or their not belonging to an ethnic group, a nation, a race or a certain religion.’” Because BDS is inherently “discriminatory,” said the court, it is a crime to advocate it.

The French court ruling is part of a worldwide trend. As more and more people around the world recognize the criminal and brutal nature of the Israeli government, its loyalists have been increasingly trying literally to criminalize activism against the Israeli occupation. For that reason, “pro-Israel” activists this week celebrated this French assault on basic free speech rights.

Joel Rubinfeld, co-chair of the European Jewish Parliament and president of the Belgian League Against Anti-Semitism, told Haaretz last February that he wanted other countries to follow the French model of criminalizing anti-Israeli-occupation activism. After a French lower court convicted the BDS activists, Rubinfeld gushed: “The French government and judiciary’s determination in fighting discrimination, and the Lellouche law especially, are exemplary for Belgium and other nations where discriminatory BDS is happening.”

As Haaretz detailed in that February article, the “Lellouche law” held up by Rubinfeld is “named for the Jewish parliamentarian [in France] who introduced it in 2003,” and “the law is among the world’s most potent legislative tools to fight the growing Boycott, Divestment and Sanctions movement, or BDS, and has catapulted France to the forefront of efforts to counter the movement through legal means.” Prior to this latest criminal case, there have been “approximately 20 anti-Israel activists who have been convicted under France’s so-called Lellouche law.”

The odious campaign to outlaw activism against the Israeli occupation extends well beyond France. In May, CBC reported that Canadian officials threatened to prosecute BDS activists there under “hate speech” laws, and after those officials denied doing so, we obtained and published the emails proving they did just that. The February Haaretz article described this troubling event in the U.K.: “In 2007, the British University and College Union said it would drop plans to boycott Israeli institutions after legal advisers said doing so would violate anti-discrimination laws.” In 2013, New York City officials joined an (ultimately failed) Alan Dershowitz-led campaign to threaten the funding of Brooklyn College for the crime of hosting pro-BDS speakers.Indeed, an outstanding Washington Post op-ed this week by a former IDF soldier, Assaf Gavron, documents how such attacks on Israel critics now extend to Israeli citizens themselves. Gavron describes how “the internal discussion in Israel is more militant, threatening and intolerant than it has ever been,” and “those few dissenters who attempt to contradict it — to ask questions, to protest, to represent a different color from this artificial consensus — are ridiculed and patronized at best, threatened, vilified and physically attacked at worst.”

Israel defenders love to equate “criticism of Israel” with “anti-Semitism” and then sanctimoniously deny that anyone does that. But criminalizing BDS advocacy — threatening people with large fines and prison terms for protesting the polices of the Israel government — is as clear of a case as it gets. As Haaretz put it, “The dragnet has also swept up BDS protesters whose actions have targeted Israel, not Jews.”

Ponder how pernicious this is. It is perfectly legal to advocate sanctions against Iran, or Russia, or Sudan, or virtually any other country. Indeed, sanctions and boycotts against those countries are not only frequently advocated in the West but are official policy. But it is illegal — criminal — to advocate boycotts and sanctions against one country: Israel. It requires sky-high levels of authoritarianism, even fascism, to abuse the criminal law to outlaw advocacy of policies and activism when it involves one country, and one country only. In response to the celebrations over this ruling from one popular-on-Twitter Israeli extremist, Avi Mayer, I repeatedly asked this question but never received an answer:

@AviMayer You believe the law should allow a person to advocate boycott/sanctions for Iran & Russia, but make it illegal for Israel?

@AviMayer Why can’t you answer what I asked? Should it be legal to advocate boycott/sanctions for Iran & Russia but not Israel?

@AviMayer 1) Should it be legal for me to advocate a boycott or sanctions on Israel? 2) Legal to do so for Iran and/or Russia? Answer that.

An Egyptian wears a T-shirt with a logo of BDS (boycott, divestment and sanctions), a campaign started by Palestinian activists to boycott Israel and Israeli-made goods, April 20, 2015.
Photo: Amr Nabil/AP

It should go without saying that one’s opinions on the desirability or validity of BDS as a policy are totally irrelevant to this discussion. It’s self-evident that a belief in “free speech” compels one to defend with equal vigor the right to express views with which one agrees and those with which one vehemently disagrees. The issue here, obviously, is not whether BDS is a persuasive policy but whether people should be criminalized for advocating it. As extremist and oppressive as it is, the criminalization of BDS activism is increasing in multiple places around the world.

Where are all the newfound free speech activists who insisted after the Charlie Hebdo murders that a defense of free expression was so vital to all that is good and just in the Western world? Why isn’t the #JeSuisBDS hashtag trending in defense of these activists who have been persecuted — prosecuted — by France for their political views? The answer is clear: Many who reveled in wrapping themselves in the “free speech” banner earlier this year — beginning with France itself and extending throughout the West — have no genuine belief in that right. That’s why these countries not only stand silent in the face of such a fundamental assault on free speech, but aggressively perpetrate those abuses.