31 Oct 2015 – Following Haiti’s controversial presidential and legislative elections held on Sunday October 25, alarm is growing about irregularities in the counting of the votes at voting centers and in the transportation of votes to the tabulation center. There is widespread mistrust of the process. Most international observers of the election and subsequent press reports have focused on the day of the election, but not on the vital final stage of the electoral process – the counting and tabulation of the votes.

Although multiple political parties are protesting the post-election counting process, Haiti’s ruling party is praising the vote and objecting to critiques of the tabulation process. CEP (Haiti’s Provisional Electoral Council) has yet to make an official statement to address the growing concerns. Voters are referring to the tabulation process as an electoral coup. Eyewitnesses on the ground say that the votes for each polling center, must be matched with the names on the list for that polling center, if they do not match they must not be counted. This is a practical way of weeding out ballot stuffing.

Although Haitians turned out in large numbers to vote, reports are putting the turnout at 30%. Community leaders are challenging this figure across the country; they say the turnout was much larger. There is also a groundswell for every vote to be counted in a transparent manner.

Members of the Human Rights and Labor Fact Finding Delegation who were in Haiti in the lead up to the election and reported on their findings having met with over a dozen communities in several areas of the country (see link below), are now receiving the following reports:

Delegation members say that the US has a special responsibility to ensure a fair and transparent counting of the votes. The US confirmed the August 9th election although fraud was rampant and the turn out ranged from 4-18%. The US has poured millions of dollars into the election, and observers say that any vote tampering would not be without the complicity of the US government.

Calls for Free and Fair Elections in Haiti:

Congresswoman Maxine Waters said in a recent press interview: “There is a history in Haiti of the elections being tampered with… we know that people would like to just smooth things over and say that they are hopeful that things are going to go well because they don’t want to deal with the truth of the problems of Haiti and the problems of trying to get fair elections. There are still those who remember Martelly’s [Haiti’s outgoing President], and how he got elected and became President. So I am sure that feeling does not send a lot of confidence throughout the country. And we should all be concerned, and continue to press forward as hard as we can.”

John McDonnell, the UK Shadow Chancellor, who has supported the people of Haiti in the past, expressed concern for the election: “It is critical that this election is a free and fair election, without violence or intimidation. Let democracy prevail.”

Actor Danny Glover: “There’s a great deal of money placed in this election… of which $30 million came from the US. The US has a vital interest in what happens in this election, even though they are willing to accept fraud, accept any way in which voters are dismissed or removed from the voter register, any way in which Famni Lavalas is removed. They understand this is an important election. We have to understand that too.”

Members of the fact-finding delegation as well as Haitian eyewitnesses on the ground are prepared to discuss their findings including patterns of pre-election violence and other intimidation, as well as these recent reports of fraudulent interference aimed at thwarting the will of the voters.

–Summary of the fact-finding human rights and labor delegation to Haiti re Presidential and Legislative Elections on October 25, 2015 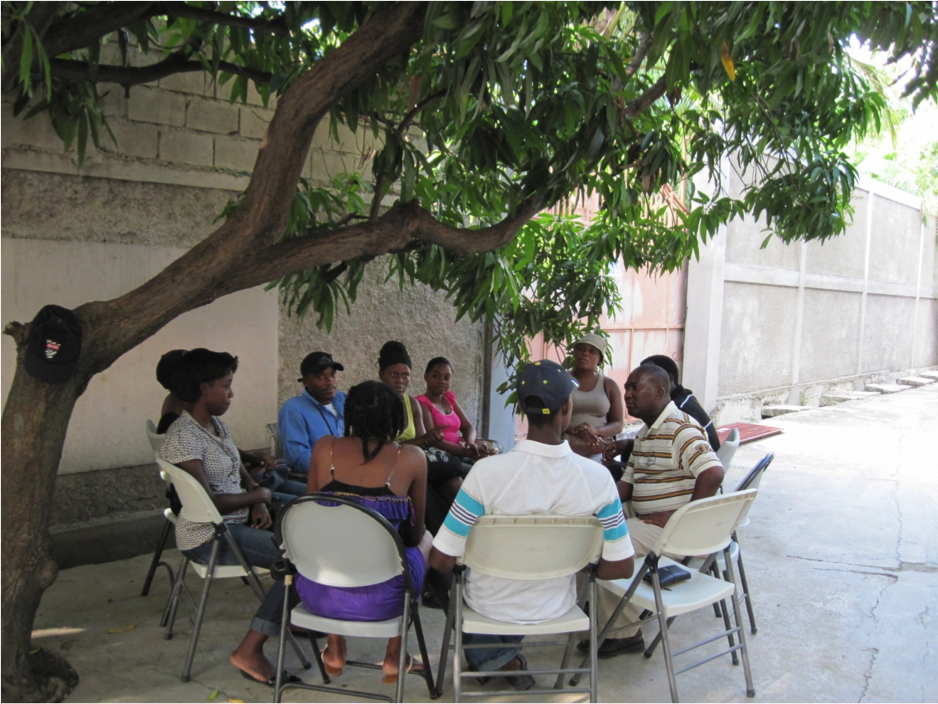 Discussion group at the Aristide Foundation for Democracy in Port-au-Prince, Haiti

Anticopyright: Editorials and articles originated on TMS may be freely reprinted, disseminated, translated and used as background material, provided an acknowledgement and link to the source, TMS: Fact-finding Delegation Reports an Electoral Coup Now in Process in Haiti, is included. Thank you.