How Africa’s Fastest Solar Power Project Is Lighting Up Rwanda

East African plant is completed in less than a year – creating jobs and setting the country on the path to providing half its population with electricity by 2017. 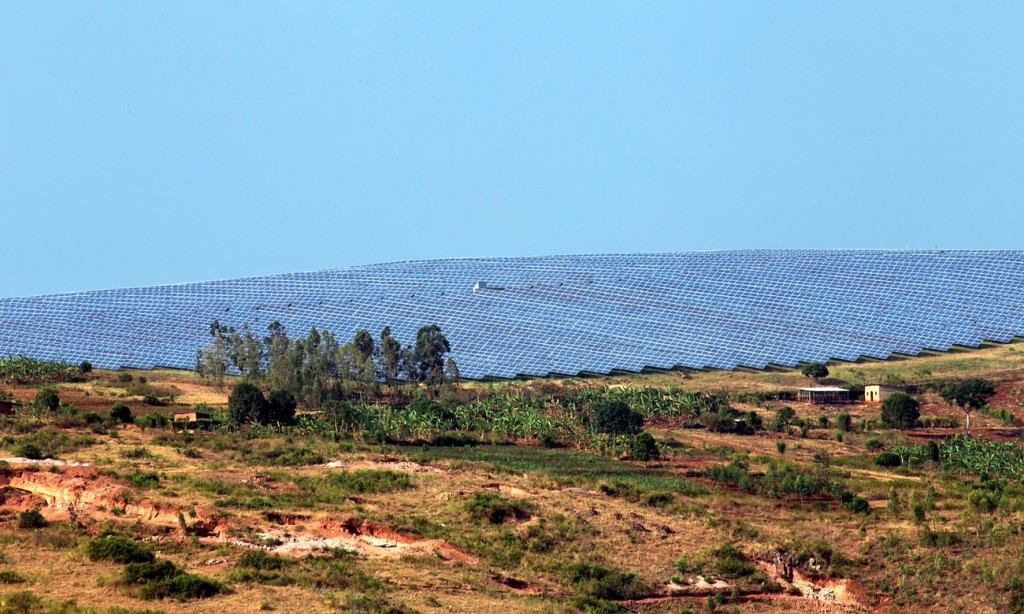 The 8.5MW solar power plant, set among Rwanda’s famed green hills, has been operational since July 2014. Photograph: Cyril Ndegeya / AFP for the Guardian

23 Nov 2015 – “Arise, shine for your light has come,” reads a sign at the entrance to the first major solar power farm in east Africa.

The 8.5 megawatt (MW) power plant in Rwanda is designed so that, from a bird’s-eye view, it resembles the shape of the African continent. “Right now we’re in Somalia,” jokes Twaha Twagirimana, the plant supervisor, during a walkabout of the 17-hectare site.

The plant is also evidence, not only of renewable energy’s increasing affordability, but how nimble it can be. The $23.7m (£15.6m) solar field went from contract signing to construction to connection in just a year, defying sceptics of Africa’s ability to realise projects fast.

The setting is magnificent amid Rwanda’s famed green hills, within view of Lake Mugesera, 60km east of the capital, Kigali. Some 28,360 solar panels sit in neat rows above wild grass where inhabitants include puff adders. Tony Blair and Bono have recently taken the tour.

From dawn till dusk the computer-controlled photovoltaic panels, each 1.9 sq metres, tilt to track the sun from east to west, improving efficiency by 20% compared to stationary panels. The panels are from China while the inverters and transformers are from Germany.

The plant’s construction has created 350 local jobs and increased Rwanda’s generation capacity by 6%, powering more than 15,000 homes. All this is crucial in an economy that, 21 years after the genocide, is expanding fast and aims to give half its population access to electricity by 2017.

Twagirimana, one of five full-time staff on-site, said: “The Rwandan government is in desperate need of energy. In 2013 they only had 110 megawatts. They wanted solar to increase capacity.”

The government agreed to a joint bid by Gigawatt Global, Norfund and Scatec Solar, backed by Barack Obama’s Power Africa initiative. Construction began in February 2014 and was finished by July. “It’s the fastest project in Africa.”

Its first year produced an estimated 15 million kilowatt hours, sending power to a substation 9km away, which has prompted mixed views in local communities. Twagirimana, 32, explained: “The neighbours say they want energy direct from here because they think it would be cheaper. It’s not true. We sell to the utility. Even our building gets power from the grid.”

The solar field is linked to a central server in Oslo and can be monitored remotely via the internet. Twagirimana believes it could be a template for the continent. “We have plenty of sun. Some are living in remote areas where there is no energy. Solar will be the way forward for African countries.” 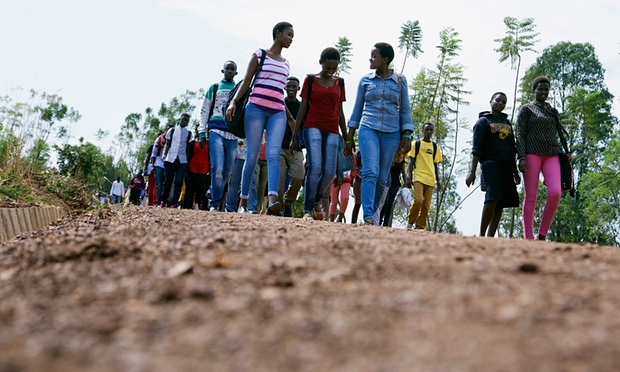 The project is built on land owned by the Agahozo-Shalom Youth Village, where 512 young people are offered schooling and extracurricular activities. Photograph: Cyril Ndegeya / AFP for the Guardian

The project is built on land owned by the Agahozo-Shalom Youth Village, whose mission is to care for Rwanda’s most vulnerable children orphaned before and after the genocide. This lease provides the biggest source of income to the six-year-old village, currently home to 512 young people who are offered schooling and extracurricular activities.

Jean-Claude Nkulikiyimfura, director of the village, said: “The project is probably the fastest: in less than a year it was up and going. It’s bringing a lot of visits from anyone interested in project development, and it brings some visibility for us. It’s something quite unique and we’re proud to be partners in it.”

Some of the village’s young people have received training at the solar site and one worked on the project. Other spin-offs have included a partnership to make solar panels for 250,000 homes. Nkulikiyimfura, 40, added: “Renewable energy is the way to go and we’re really proud to have it here. It shows what’s really possible when government works with the public and private sectors.”

One village member, 18-year-old Bella Kabatesi, who lost her parents to illness when she was four, has used solar power to design a night light at a memorial to the village’s late founder. “The big solar plant is going to help the people and the country because it’s cheaper than main electrical power,” she said.

Rwanda has been both criticised for trampling on human rights and praised for its unswerving focus on development and getting things done. Chaim Motzen, Gigawatt Global’s co-founder and managing director, and a solar industry pioneer in Israel, said: “Rwanda had 110 megawatts on the grid for a population of 12 million people; Israel has 13,000 megawatts for 8 million people. There was a desperate need for more energy. 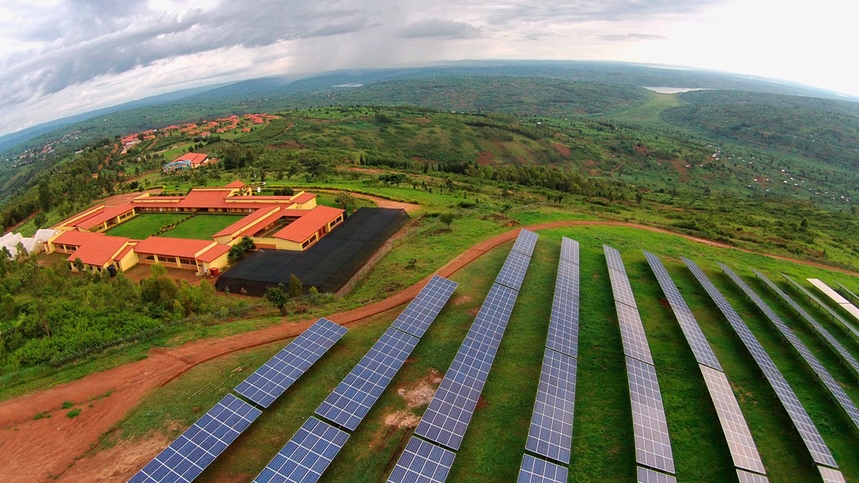 “Rwanda has an excellent business environment – no corruption – and that played a role. I also think they were serious about wanting to move quickly. We had good partners on the ground. It’s now being used as a model: you can do energy deals quickly and get things done. It’s a catalyst for future projects in Rwanda and hopefully not just in Rwanda to inspire others to do what we’re doing.”

Solar energy is a key element in Africa’s future, Motzen believes. “Is it the only solution? No, because solar is intermittent. But will it be a major part of the solution? I believe it will.”

Yosef Abramowitz, president of Gigawatt Global, told a US government delegation and Bono at a site visit in August: “We have decoupled GDP growth from emissions growth. What you have heard is that we are 6% of a country’s generation capacity without adding any emissions. It is a false choice in Paris [the climate summit] and this is the proof test to be able to break that deadlock so that the world can go solar.”