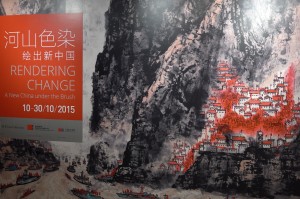 Wherever I go, I hear the same question: “Is China still a Communist country?”

My reply is always the same: “China is one of the oldest and greatest cultures on earth, and its leadership says that it is ‘a socialist country with Chinese characteristics’. And when China says something, it should be taken seriously; the world should be listening.”

The West, including its defunct leftist intellectuals, has no right to tell China what it is and what it is not. Instead of demonstrating their arrogant chauvinism, they should, for once, shut up, listen and learn something from the great non-Western nations and their cultures!

In his recent interview, Noam Chomsky declared: “Europe is predominantly racist.” He was talking mainly about Europe’s attitude towards Turkey. But its racism is principally demonstrated through its attitude towards what it calls the “Far East” in general and towards China in particular.

So, is China a Marxist country?

It definitely is! And my publishing house, Badak Merah will soon publish a powerful book by Jeff J. Brown, arguing and proving exactly that – “China is Communist, Damn It!” And other books by leading writers and scholars, arriving at the same conclusion, will be published soon after.

Time to break the monopoly on that boring “official” Western narrative on China!

There are, after all, hundreds of sound reasons to believe that many of the Chinese leaders and countless Chinese people are true Maoists, true Communists and true Internationalists.

The “1st World Cultural Forum” held in Garden Hotel in Beijing on 18th and 19th October 2015, exceeded all hopes and expectations of those people all over the world who are convinced that the People’s Republic of China is actually an exciting and vibrant model of a mixed economy, directed by, until this moment, an ideologically strong Communist Party of China (the CPC). Not a “perfect model”, I have to say. Definitely not perfect, but full of vitality and zeal and hope!

It was the China Academy of Social Sciences (CASS), China’s leading intellectual body, which hosted this important Cultural Forum. Remarkably, some of the greatest Russian academics were invited to speak and mingle with their Chinese comrades. There were also a few Western and non-Western dissident intellectuals speaking there, notably Mr. Amin from Egypt.

It is obvious that this event was a tour-de-force of unity, a place where several great Marxist philosophers from China and Russia were passionately denouncing the horrors committed by Western imperialism all over the world. Here, these thinkers were searching for concepts that would make it possible to move our world forward after the appalling Western cultural, political and economic hegemony is finally broken and defeated.

“We are offering 3-way simultaneous interpretation”, explained one of the organizers. “We don’t want the English language to dominate our events anymore. The languages at this conference are Chinese, Russian and English.”

Then came the discourses; then China and Russia spoke! Speakers were reciting poetry in each other’s languages, even singing old Communist songs. They showed great knowledge of each other’s cultures, and they expressed deep respect for one another.

They discussed how the West was infiltrating, trying to dominate and often even trying to destroy the cultural and educational systems of countless countries all over the World.

This was powerful intellectual combat. Or, more precisely, it was an initial stage of war – regrouping and planning for such combat. And China’s “Academic Division of Marxism Studies” of CASS was now at the forefront!

There was a speech delivered by an important Russian thinker, Aleksandr Buzgalin, Professor at Moscow State University: “Russia and China have great preconditions to build bridges”.

Professor Buzgalin spoke about the Soviet Union: “In the USSR, we lived in world culture, not in a local one. In our country, more copies of books by Shakespeare and Hemingway were printed than in the UK and US.” Then he continued: “Culture for us is not just some beautiful dress, but what can we do for our people, and for the people of India or Africa.”

He spoke about two great countries, China and Russia, and about future cooperation which could lead to creating a world where progress would not be measured by trade exchange, anymore, but by arts, science and education. “New cultural world order”, he called it with the roots in huge Sino-Russian “bi-lingual scientific/cultural areas”.

His wife, Liudmila Bulavka-Buzgalina (Professor at Moscow University of Finance and Law) later argued: “The creative potential of personality is not equal to human capital, which is only a monetary (investment) measure of development, reducing human qualities and values to profit as goal of all human actions.”

Mr. Li Shenming, Director of the World Socialism Research Center and Deputy Director of the Committee for Internal and Judiciary Affairs of the National People’s Congress, plunged into defense of Chinese and world Marxism:

“Some say that ‘specter of Marxism’ already left us, but it did not! It is floating above us, looking at us from the heights… It never departed!”

One after another, academics of China, Russia and the rest of the world spoke about culture, Marxism, the PRC and our battered (mainly by Western imperialism) but wonderful planet.

Here we all agreed: this world is worth fighting for! 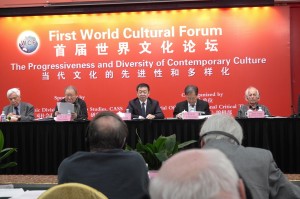 “Chinese culture is one of only 4 global civilizations that was not interrupted,” explained Zhang Quanjing, former Organization Department of CPC Central Committee Head. “Thanks to Marxism and Communism, under leadership of the Communist Party, our nation survived and strived…. Culture was found during the revolution and it is of spiritual value.”

Comrade Zhang spoke about Red Culture and about how it always fought against oppression and religious superstition.

“Culture belongs to the people, not to a minority”, he concluded. “Chairman Mao argued in 1945 that art and culture are about principles and should serve the people!”

What tremendous optimism! He was spitting in the face of all that dark nihilism that is being spread by the West through its mass propagandist media, depressing horror films and religious dogma!

The World Cultural Forum is born!

“It is really necessary to establish the “World Cultural Forum”, that truly reflects the will of working people all over the world”, proclaimed Mr. Cheng Enfu, Director of the Academic Division of Marxist Studies (CASS). He said that the spirit of Marxism must be widely spread everywhere.

The organizers invited me to speak towards the very end of the Forum, to wrap up and summarize the topics that were so passionately discussed for two days. It was a great honor!

I told them about my last 4 years of crisscrossing the world, amassing the evidence, exposing all those “color”, “umbrella” and other “revolutions”. I told them about the West’s subversive actions designed to smear, derail and even to destroy all truly Marxist and revolutionary movements, governments and even entire countries. I told them about my 840-page book “Exposing Lies of The Empire”, that was born from this complex and arduous journey.

“The goal of subversive, hostile and from the point of view of international law, illegal acts committed by the Western countries for years, decades and centuries, has been always the same: to break and to destroy all opposition to the West’s control of the world. All independent-minded governments that have been serving their people were at some point attacked, and with some small exceptions that include China, Cuba, Venezuela and Vietnam, thoroughly destroyed.”

Russian academics embraced me. They treated me like their own. They opened their hearts and doors to me, and invited me to come and speak in Moscow and St. Petersburg, the city where I was born. Chinese comrades simply began treating me as if I were a Russian. They also demonstrated great warmth. We were on the same boat, finally.

I brought the message from South America, a continent that was my adoptive home for many years: “Our revolutions are now under direct attack from the West. While this marvelous unity between China and Russia is forming in front of our eyes and thanks to our efforts, please do not forget about Venezuela, Ecuador, Cuba and other proud nations that are also at the forefront of the struggle against Western imperialism and fascism! There are now three great centers of anti-imperialist resistance: China, Russia and Latin America. And Latin America is the most vulnerable and it is fighting for its survival!”

Of course there are also other great countries, big and small, like Syria, Iran, South Africa and Eritrea, standing firmly against Western terror. But this encounter, this show of unity, was too brief to address all issue our world is facing; it was all clearly just a beginning. But great beginning! In the future, nothing and nobody would be forgotten!
___________________________________