US Government Asks Native Hawaiians to Legitimize Occupation with Vote

Native Hawaiians are the last Indigenous population in the U.S. without their own government. But what they want is independence, not legal recognition.

6 Nov 2015 – In early November, a month-long voting period began for a group of Hawaiians to elect delegates to a constitutional convention. Al Jazeera cast the process, called Na’i Aupuni as, “a historic election [that] seeks to return sovereignty to Native Hawaiians, a people still stinging from the bitter ruin of colonization.” Colorlines picked up the story saying, “Native Hawaiians are Voting to Create Independent Government.” For those interested in self-determination for indigenous people, particularly Hawaiians who are the last remaining native population in the U.S. without its own governance structures, the story sounds like good news. 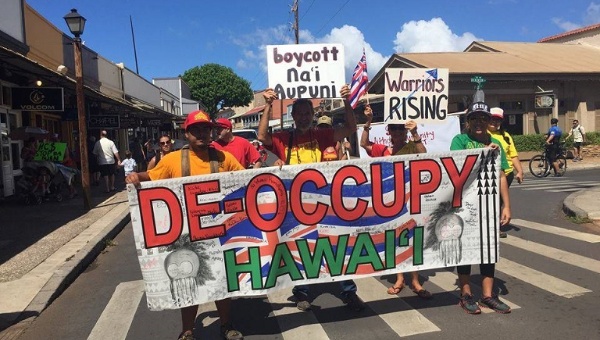 The election in Hawaii has been called “a fake pathway to nationhood and its disillusioned vision of sovereignty.” | Photo: Facebook: Protest Na’i Aupuni

However, to Anne Keala Kelly, an award winning, Native Hawaiian filmmaker and journalist, “this isn’t so much a vote, as a stick-up.”

Kelly is intimately involved in the movement against the building of a new 30-meter telescope on the sacred Mauna Kea summit. She is making a documentary about it called “Why the Mountain.”

“It’s as if the state and federal government got together and decided to hold a gun to our head and say, you’re going to vote on one of these two things: ‘Do you like me, or do you love me?'” Kelly told me in an interview on Uprising. 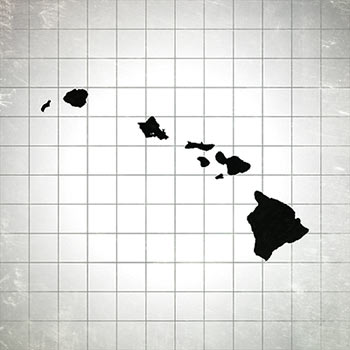 Two hundred native Hawaiians are running for the chance to be one of 40 delegates to a convention early next year to determine the relationship between the U.S. government and native Hawaiians. But many Hawaiians, like Kelly, are expressing grave doubts about the process. Walter Ritte, one of the candidates and a long-time Hawaiian activist, recently withdrew his name from the election.

At the heart of the matter is the U.S.’s annexation of Hawaii, which may not be legal. In one of the more nuanced news reports covering the election, the BBC laid out how the annexation of the islands was done by Congressional fiat after the U.S. began its occupation, and therefore is possibly invalid under international law. Furthermore, in 1993 President Bill Clinton actually signed an “apology resolution” expressing regret for the U.S.’s overthrow of the Hawaiian monarchy.

US military toppled its monarchy in 1896. US Congress took its sovereignty in 1903. Is Hawaii part of a US Empire? https://t.co/sEbqH9fsUu

A majority of the hundreds of Hawaiians who testified at the hearings challenged the U.S. government’s legitimacy in Hawaii and demanded independence. “We do not need you here. This is our country,” and “Get out of our house! Go home,” were among the sentiments expressed.

After those hearings, the Obama administration adopted Na’i Aupuni, the current election process, which given the historical context, appears as an attempt to retroactively legalize annexation via a facade of native Hawaiian participation.

“They’ve been trying to cover up the overthrow [of the Hawaiian kingdom] for 200 years,” said Kelly.

Missed Anne Keala Kelly: 'Everything You Know About the Hawaii Sovereignty Vote is Wrong'? https://t.co/n7JndckYP2 pic.twitter.com/4PDiZJcW9F

Aside from the problematic origins of this election, there are serious questions over who is actually eligible to cast a ballot. According to Kelly, the Hawaii state government spent millions of dollars over several years, trying to get native Hawaiians to submit their names to a registry. Only about 19,000 out of half a million residents and diaspora Hawaiians did so. The state then cobbled together other lists of people who have applied for scholarships and home loans and expanded the registry to about 150,000. After realizing that thousands of names were those of people who have passed away, it was whittled back down to approximately 95,000. That flawed registry is the list of voters that is being drawn from for this election.

For decades the Native Hawaiian movement for sovereignty has demanded the right to self-determination. In recent years that movement has grown, its strength especially visible during the past year of protests against the Mauna Kea telescope. Activists camped on the mountain and engaged in militant civil disobedience, refusing to let construction crews pass the steep narrow roads leading up to the summit which houses an internationally funded, world class observatory. The political actions received widespread news coverage and demonstrated the power of an organized population. “What they want to do is make that the Hawaiian sovereignty movement, which has now become an independence movement – they want to make sure that it does not have any traction,” explained Kelly, in reference to the U.S. government’s push for the election.

The fight over Hawaii goes beyond the relationship between Native Hawaiians and the U.S. federal government. From the beginning, Hawaii has housed a crucial military base, enabling the U.S. to expand its reach to the middle of the Pacific Ocean. “The U.S. illegally invaded Hawaii to facilitate its war with Spain and the Philippines,” said Kelly. “The American presence here has everything to do with militarizing the Pacific.”

The U.S. hosts the world’s largest maritime exercises every other year on the Hawaiian Islands. Tens of thousands of military personnel from dozens of countries attend RIMPAC, including Indonesia, which is overseeing its own occupation of the Pacific islands of West Papua. Indonesia’s brutally violent crackdown on the West Papuan independence movement is facilitated by the U.S.’s long-standing occupation of the Pacific islands of Hawaii.

If native Hawaiians can be corralled into governing their own “nation within a nation,” as indigenous mainland tribes have been, then the supremacy of the U.S. state over Hawaiian lands will remain intact. Native Hawaiians will have control over limited territories whose boundaries, like those of mainland Native American reservations, will be determined with the permission of the U.S. government. If this election was truly about Hawaiian independence and sovereignty, then they would be voting on whether their islands should remain a U.S. state, or become their own sovereign nation.

That democratic choice has never been offered by the federal government and likely never will be.

Sonali Kolhatkar is the host and executive producer of Uprising, a daily radio program at KPFK Pacifica Radio. She is also the Director of the Afghan Women’s Mission, a U.S.-based nonprofit that supports women’s rights activists in Afghanistan and co-author of Bleeding Afghanistan: Washington, Warlords, and the Propaganda of Silence.