Why a Climate Deal Is the Best Hope for Peace 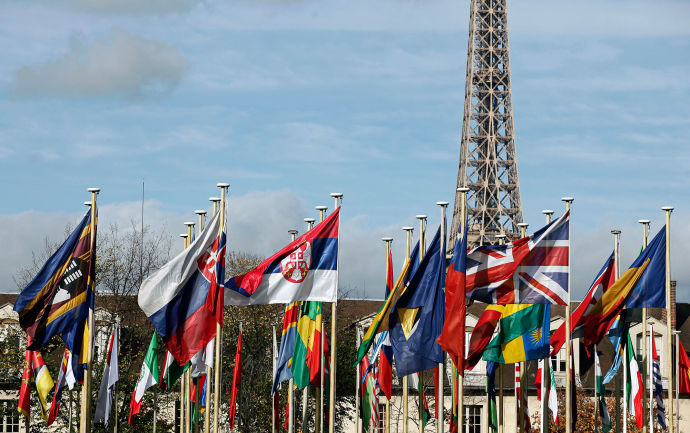 The French government has stated that the COP21 climate summit will begin as scheduled at the end of November, but police have barred the huge planned marches and protests. Credit Photograph by Chesnot/Getty

18 Nov 2015 – Soon after the horrific terror attacks in Paris, last Friday, our phones filled with messages from friends and colleagues: “So are they going to cancel the Paris climate summit?” “The drums of war are beating. Count on climate change being drowned out.” The assumption is reasonable enough. While many politicians pay lip service to the existential urgency of the climate crisis, as soon as another more immediate crisis rears its head—war, a market shock, an epidemic—climate reliably falls off the political map.

After the attacks, the French government stated that the COP21 climate summit would begin as scheduled at the end of November. Yet the police have just barred the huge planned marches and protests, effectively silencing the voices of people who are directly affected by these high-level talks. And it’s hard to see how sea-level rise and parched farmland—tough media sells at the best of times—will have a hope of competing with rapid military escalation and calls for fortressed borders.

All of this is perfectly understandable. When our safety feels threatened, it’s difficult to think of anything else. Major shocks like the Paris attacks are awfully good at changing the subject. But what if we decided to not let it happen? What if, instead of changing the subject, we deepened the discussion of climate change and expanded the range of solutions, which are fundamental for real human security? What if, instead of being pushed aside in the name of war, climate action took center stage as the planet’s best hope for peace?

The connection between warming temperatures and the cycle of Syrian violence is, by now, uncontroversial. As Secretary of State John Kerry said in Virginia, this month, “It’s not a coincidence that, immediately prior to the civil war in Syria, the country experienced its worst drought on record. As many as 1.5 million people migrated from Syria’s farms to its cities, intensifying the political unrest that was just beginning to roil and boil in the region.”

As Kerry went on to note, many factors contributed to Syria’s instability. The severe drought was one, but so were the repressive practices of a brutal dictator and the rise of a particular strain of religious extremism. Another big factor was the invasion of Iraq, a decade ago. And since that war—like so many before it—was inextricable from the West’s thirst for Iraqi oil (warming be damned), that fateful decision in turn became difficult to separate from climate change. ISIS, which has taken responsibility for the attacks in Paris, found fertile ground in this volatile context of too much oil and too little water.

If we acknowledge that the instability emanating from the Middle East has these roots, it makes little sense to allow the Paris attacks to minimize our already inadequate climate commitments. Rather, this tragedy should inspire the opposite reaction: an urgent push to lower emissions as rapidly and deeply as possible, including strong support for developing countries to leapfrog to renewable energy, creating much-needed jobs and economic opportunities in the process. That kind of bold climate transition is our only hope of preventing a future in which, as a recent paper in the journal Nature Climate Change put it, large areas of the Middle East will, by the end of the century, “experience temperature levels that are intolerable to humans.”

But even this is not enough. The deepest emission reductions can only prevent climate change from getting far worse. They can’t stop the warming that has already arrived, nor the warming that is locked in as a result of the fossil fuels we have already burned. So there is a critical piece missing from our climate conversation: the need to quickly lower atmospheric CO2 levels from the current four hundred parts per million to the upper limit of what is not considered dangerous: three hundred and fifty parts per million.

The implications of a failure to bring carbon down to safer levels go well beyond amplifying catastrophes like Syria’s historic drought. The last time atmospheric CO2 was this high, global sea levels were at least six metres higher. We find ourselves confronted with ice-sheet disintegration that, in some susceptible areas, already appears unstoppable. In the currently overloaded CO2 climate, it’s just a matter of time until hundreds of millions of people will be displaced from coastal regions, their agricultural lands and groundwater destroyed by saltwater intrusion from sea rise. Among the most vulnerable areas are broad swaths of South and Southeast Asia—which include some of the world’s biggest cities, from Shanghai to Jakarta—along with a number of coastal African and Latin American countries, such as Nigeria, Brazil, and Egypt.

A climate summit taking place against the backdrop of climate-fuelled violence and migration can only be relevant if its central goal is the creation of conditions for lasting peace. That would mean making legally enforceable commitments to leave the vast majority of known fossil-fuel reserves in the ground. It would also mean delivering real financing to developing countries to cope with the impacts of climate change, and recognizing the full rights of climate migrants to move to safer ground. A strong climate-peace agreement would also include a program to plant vast numbers of native-species trees in the Middle East and the Mediterranean, to draw down atmospheric CO2, reduce desertification, and promote cooler and moister climates. Tree planting alone is not enough to lower CO2 to safe levels, but it could help people stay on their land and protect sustainable livelihoods.

We knew that the Paris summit wasn’t going to achieve all of this. But just days ago, bold collective action on climate seemed within reach: the climate movement was accelerating, winning tangible victories against pipelines and Arctic drilling; governments were strengthening their targets, and some were even starting to stand up to fossil-fuel companies.

Enough pressure existed, it seemed, to achieve the main goals of the conference: an enforceable and binding international treaty to ratchet down carbon emissions once and for all. But the movement believed that keeping the pressure up during the summit would be critical. That just got a lot harder.

The last time there was this much climate momentum was in 2008, when Europe was leading a renewable-energy revolution and Barack Obama was pledging, as he accepted the Democratic nomination, that his election would be “the moment when the rise of the oceans began to slow and our planet began to heal.” Then came the full reverberations of the financial crisis. By the time the world met at the Copenhagen climate-change conference, at the end of 2009, global attention had already shifted away from climate to bank bailouts, and the deal was widely considered to be a disaster. In the years that followed, support for renewables was slashed across southern Europe, ambitions dwindled, and pledges of climate financing for the developing world virtually disappeared. Never mind that a decisive response to the climate crisis, grounded in big investments in renewables, efficiency, and public transit, could well have created enough jobs to undercut the discredited logic of economic austerity.

We cannot afford to allow this story to be repeated, this time with terror changing the subject. To the contrary, as the author and energy expert Michael T. Klare argued weeks before the attacks, Paris “should be considered not just a climate summit but a peace conference—perhaps the most significant peace convocation in history.” But it can only do that if the agreement builds a carbon-safe economy fast enough to tangibly improve lives in the here and now. We are finally starting to recognize that climate change leads to wars and economic ruin. It’s time to recognize that intelligent climate policy is fundamental to lasting peace and economic justice.

Jason Box is an ice-sheet climatologist and geographer.

Naomi Klein is the award-winning author of the international bestseller, No Logo: Taking Aim at the Brand Bullies, translated into 28 languages. She writes an internationally syndicated column for The Nation magazine and the Guardian newspaper. She is a former Miliband Fellow at the London School of Economics and holds an honorary Doctor of Civil Laws from the University of King’s College, Nova Scotia. Her book The Shock Doctrine: The Rise of Disaster Capitalism was published worldwide in 2007. She is a member of the board of directors for 350.org, part of a coalition of groups that organized the large climate marches planned for November 29th and December 12th in Paris.