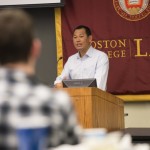 With a constitution that safeguards its immense power and wealth, the military knows that, unlike in 1990, it doesn’t need a crackdown to keep its regime intact.

9 Nov 2015 – Though in exile 6,000 miles away from Myanmar, I can almost taste the euphoria. Aung San Suu Kyi’s wildly popular opposition – the National League for Democracy – has won a landslide in the multiparty elections, and 31 million voters, most apparently backing the NLD, are savouring a long-awaited moment of jubilation. The NLD leader, whom they call Amay or mother, appeared on TV, her eyes shining with tears of joy.

Even foreign journalists covering the country in the 25 years since Aung San Suu Kyi was placed under house arrest have scarcely been able to conceal their excitement at the prospect of a new era of freedom and democracy, ushered in through her non-violent, pragmatic leadership. 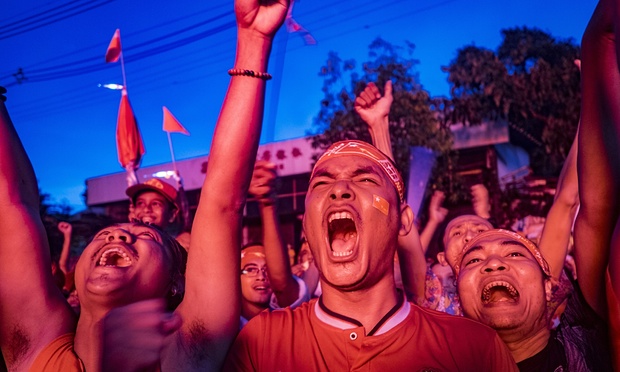 Myanmar’s Mandela moment has arrived. Or has it?

A sober analysis may be in order. Aside from the fact that Myanmar’s military leaders have, constitutionally, blocked any possibility of “the Woman” with her two “impure-blooded sons” and “foreign privileges” assuming the presidency, Aung San Suu Kyi’s party faces huge barriers to turn a resounding electoral mandate into a real step towards a genuinely representative government.

And this is not the first time the public has felt euphoric about the power of its votes. In May 1990 Aung San Suu Kyi and her then fledgling opposition party won a decisive mandate taking 82% of the parliamentary seats and 62% of the total votes. That landslide came despite the fact that the generals placed her and her senior colleagues under house arrest on the eve of the elections, in effect barring them from the electoral process. So the opposition knows how it feels to fail to convert this mandate a quarter-century ago into a real political gain or put the country on the path of democracy.

The generals annulled the results of that election and imprisoned hundreds of newly elected MPs. Their excuse was that the NLD had been infiltrated by communists, considered a threat to national security.

Now, 25 years on, Myanmar finds itself in a similar situation. This time the ruling military has prepared itself to meet the popular challenge for democratisation through electoral politics. To appreciate how difficult it is for Aung San Suu Kyi and her opposition to move the country in a genuinely democratic direction, it is imperative to understand how the military – fascist at root, and authoritarian in outlook and operation – defines and approaches the issue of electoral democracy.

To start with, elections overseen by the generals are held not to usher in a representative government as it is understood in any system worthy of the term “democracy”; but to legitimise the system they call “discipline-flourishing democracy”. This means the military serves as the ultimate custodian with the power to discipline any elected government or MP who dares to stray from the military’s chosen path and its definition of parliamentary democracy.

The main instrument is the 2008 constitution, which elevates core interests of the military (such as the military budget, appointments, business conglomerates and security matters) above the law and parliamentary oversight.

Specifically, the constitution authorises the commander-in-chief to appoint and control all cabinet members in charge of departments relating to the apparatus of state security, such as defence, home affairs and border affairs (dealing with ethnic and strategic matters). He also approves all presidential and vice-presidential candidates. In other words, this top-ranking soldier can stage a coup any time he deems fit.

In addition, he holds the constitutional authority to in effect veto any popularly elected government’s attempt to amend the 2008 constitution, which of course safeguards the military’s prerogatives. Even if the NLD now forms a government, the all-powerful military can and will reject any changes that seek to convert the generals’ discipline-flourishing democracy into something more democratic and less disciplined.

It is little wonder then that Min Aung Hlaing, the commander-in-chief, with a smile on his face, wrote off popular fears that the army might stage a coup, annul the results, and lock up the new MPs . A coup was “not conceivable”, he said.

For his part, the acting chairman of the ruling Union Solidarity and Development party – the former general Htay Oo – was heard conceding that his party had suffered big losses in many areas. But in spite of his own defeat, he looked unnaturally relaxed when he said that the ruling party would accept any outcome, including an NLD landslide, and that the mission of the generals was to put the country on the path of democracy. He can say this, because of course it is the military’s version of democracy.

Having secured their ill-gotten gains – billions of dollars amassed from the proceeds of jade, natural gas and other national assets and a quarter-century of the military’s “Burmese Way to Capitalism”- and with the constitutional right to take power back 24/7, the generals will keep on smiling.

It is win-win: incremental change with echoes of the Arab spring, without bloodshed or chaos. The public and opposition get to experience another ephemeral wave of euphoria. And democratic governments in Washington, London, Paris or Canberra can now hold up Burma as a success story of the kind of business, diplomatic and military engagement they practise vis-a-vis China. Aung San Suu Kyi can feel vindicated about her Mandela-like status and her choice of a pragmatic strategy of no longer rocking the boat and fighting hard for human rights.

Never mind that the “ democracy” midwifed by these powerful actors excludes and undermines the welfare and interests of the country’s jailed student and labour activists, farmers, ethnic minorities in the civil war zones, and the disenfranchised Rohingya people and other Muslims.

Dr. Maung Zarni is a Burmese activist blogger, Associate Fellow at the University of Malaya, a member of the TRANSCEND Network for Peace, Development and Environment, founder and director of the Free Burma Coalition (1995-2004), a visiting fellow (2011-13) at the Civil Society and Human Security Research Unit, London School of Economics, and a nonresident scholar with the Sleuk Rith Institute in Cambodia. His forthcoming book on Burma will be published by Yale University Press. He was educated in the US where he lived and worked for 17 years. Visit his website http://www.maungzarni.net