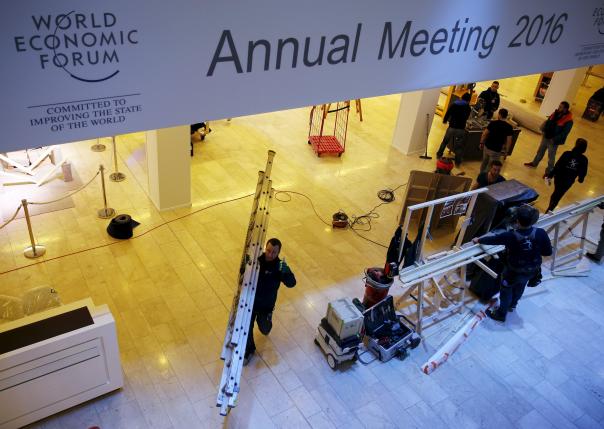 Workers prepares the congress centre ahead of the Annual Meeting 2016 of the World Economic Forum (WEF) in Davos, Switzerland, January 18, 2016. REUTERS/Ruben Sprich

19 Jan 2016 – Politicians and business leaders gathering in the Swiss Alps this week face an increasingly divided world, with the poor falling further behind the super-rich and political fissures in the United States, Europe and the Middle East running deeper than at any time in decades.

Just 62 people, 53 of them men, own as much wealth as the poorest half of the entire world population and the richest 1 percent own more than the other 99 percent put together, anti-poverty charity Oxfam said on Monday.

Significantly, the wealth gap is widening faster than anyone anticipated, with the 1 percent overtaking the rest one year earlier than Oxfam had predicted only a year ago.

Rising inequality and a widening trust gap between people and their political leaders are big challenges for the global elite as they converge on Davos for the annual World Economic Forum, which runs from Jan. 20 to 23.

But the divisions go far beyond those that exist between the haves and have-nots. In the Middle East, the divide between Shi’ites and Sunnis has reached crisis point, with Iran and Saudi Arabia jostling openly for influence in a region reeling from war and the barbarism of Islamic extremists.

The conflicts there have spilled over into Europe, causing deep ideological rifts over how to handle the worst refugee crisis since World War Two and – with Britain threatening to leave the European Union – raising doubts about the future of Europe’s six-decade push towards ever closer integration.

The shock emergence of Donald Trump as the front-runner for the Republican presidential nomination has exposed a gaping political divide in the United States, stirring anxiety among Washington’s allies at a time of global turmoil.

Among the key figures in Davos, will be U.S. Vice President Joe Biden, Secretary of State John Kerry, Israeli Prime Minister Benjamin Netanyahu and the foreign ministers of both Iran and Saudi Arabia.

Canada’s new Prime Minister Justin Trudeau will be on hand, as will Britain’s David Cameron and Mario Draghi at a time when a new transatlantic monetary policy divide is opening up between his loosening European Central Bank and a tightening U.S. Federal Reserve.

Celebrities will also be out in force, including film stars Leonardo Di Caprio and Kevin Spacey.

Edelman’s annual “Trust Barometer” survey shows a record gap this year in trust between the informed publics and mass populations in many countries, driven by income inequality and divergent expectations of the future. The gap is the largest in the United States, followed by the UK, France and India.

“The consequence of this is populism – exemplified by Trump and Le Pen,” Richard Edelman, president and CEO of Edelman, told Reuters, referring to French far-right leader Marine Le Pen, whose National Front has surged ahead of traditional parties in opinion polls.

The next wave of technological innovation, dubbed the fourth industrial revolution and a focus of the Davos meeting, threatens further social upheaval as many traditional jobs are lost to robots.

The Oxfam report suggests that global inequality has reached levels not seen in over a century.

“Far from trickling down, income and wealth are instead being sucked upwards at an alarming rate,” the report says.

It points to a “global spider’s web” of tax havens that ensures wealth stays out of reach of ordinary citizens and governments, citing a recent estimate that $7.6 trillion of individual wealth – more than the combined economies of Germany and the UK – is currently held offshore.

“It’s a major wake-up call,” said Jyrki Raina, general secretary of IndustriALL Global Union, which represents 50 million workers in 140 countries in the mining, energy and manufacturing sectors. “Inequality is one of the biggest threats to economic well-being and it needs to be addressed.”

U.S. President Barack Obama touched on the issue in his recent State of the Union address, noting that technological change was reshaping the planet.

“It’s change that can broaden opportunity, or widen inequality. And whether we like it or not, the pace of this change will only accelerate,” he said.

“Companies in a global economy can locate anywhere, and face tougher competition…As a result, workers have less leverage for a raise. Companies have less loyalty to their communities. And more and more wealth and income is concentrated at the very top.”

One Response to “A World Divided: Elites Descend on Swiss Alps amid Rising Inequality”