Dancing for Joy and Friendship

Most countries have their unique forms of dancing which depict their culture and heritage. Be it Europe or the Americas or India or China, every region or country has distinctive styles and dance forms.

We have the popular ballet that originated in Italy but is now a cultural symbol of France and Russia. It has now become popular in many western countries. It shows dancers moving about gracefully almost as if they were fairies. Another form — the western-country type of dance such as cowboy dance includes dance forms that are danced to western music. Then there are other forms where couples dance together such as ball room dancing or waltz or polka. These look artistic and graceful.

Sometimes there are dances that are rooted in the religious backgrounds. This is especially true in the various dance forms of India. Here there are not one or two styles of dance but almost countless forms. Broadly there are the north Indian and south Indian dances. But then in the North east that consist of seven states or seven sisters as they are popularly called, each state has a splendid and unique style of dance.

Why is dancing so popular and loved? There are several reasons – they bring people together; they depict the unique cultures of different regions and popularise stories from epics and religious books; they demonstrate joy at the bountiful agricultural produce; they cover the geography and the landscape of various regions. For example one of the North Eastern Indian states (called the seven sisters) Sikkim is geographically an extension of the Himalayas and has snow covered mountains and animals that can survive in the cold weather. So one of the dance forms shows people clothed such that they look like snow leopards that dance and jump around and make appropriate sounds.

Another element is depiction of violence and controlling it by dance. There is violence in all of us – sometimes it is muted and sometimes it comes out in the open. Some dance forms especially of Nagaland (again one of the north eastern sisters) depict dancers carrying spears and sticks and making war like sounds to terrorise an enemy. The dance is riveting and it is a means of subsuming the violence that we occasionally feel for some unspecified opponent.

Similarly one dance genre of South Africa has about ten dancers dancing in a war-like menacing manner with the aim of frightening away their opponents. Who these opponents are is not clear, but the tenor and objective of the dance is clear enough — to frighten and disband the enemy. Another dance form of this country has dancers hunting animals for food and after a successful chase dancers dance and sing joyfully and merrily.

South Africa has another dance form which is traditional. With drummers drumming loudly, dancers carrying some twigs and grass in their hands and showering each other as well as some of the audience with these twigs. For what purpose? To heal people of disease.

There is a major difference between the Indian genre of dancing and that of South Africa. While the latter genre is loud and vibrant the former is more gentle and the music more melodious. However one form of dancing — the Sikh dance or Bhangra as it is called, is similar to the South African genre in terms of dynamic movements and loudness. Bhangra symbolises gratefulness and happiness – gratefulness at the abundant farm yield. Again Bhangra is now performed all over the world especially in England, USA and Canada where there are a large number of Sikhs.

Another north Indian dance — Kathak is gentle and nuanced. Here dancers express various emotions of love, sadness and hope through facial gestures and body movements. The gestures include eye and neck movements that give vent to the different emotions of the dancer. Normally this genre is based on some popular story such as that of Lord Krishna and his many female admirers called Gopis dressed in their finery. The dancer who plays the role of Krishna is often a female dancer clothed in a male dress and playing melodious music on the flute. Alternatively, the story of Ramayana is also a rich source of dance forms.

One South Indian form – popularly called Bharat Natyam is an ancient, rich and gentle form of dance. It originated in the temples of the (South Indian) state of Tamil Nadu and is a form of natya yoga (yoga of dance) that reveals various emotions such as love, longing and spirituality through bodily and eye movements of the dancers. As the name suggests it is like a dancer doing yoga. We can see many figurines called Apsaras doing Bharat Natyam adorning temples in India. Not only is Bharat Natyam common in many parts of India, it has become popular in countries such as Malaysia or Thailand where there is a sizable Indian diaspora. 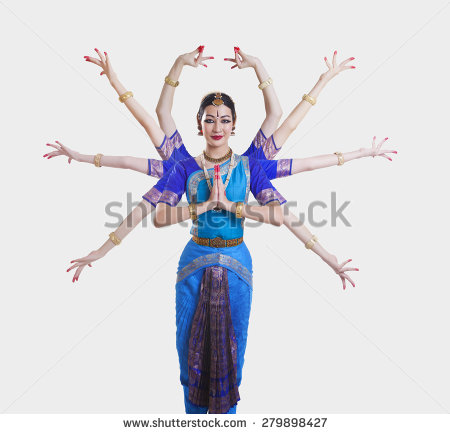 Portrait of Bharatanatyam dancer with multiple mudras over white background.

Even the famous Angkor Wat temple of Cambodia which was earlier a Hindu temple but has now been converted into a Buddhist temple has Apsaras dancing in various poses on its walls and pillars.

Like the infinite variety of people and their creativity, the dance forms also take on innumerable styles and forms that are pleasing, joyful and bring the dancers and the audience together in amity and friendship.

Anticopyright: Editorials and articles originated on TMS may be freely reprinted, disseminated, translated and used as background material, provided an acknowledgement and link to the source, TMS: Dancing for Joy and Friendship, is included. Thank you.