18 Jan 2016 – This Tuesday [Jan 12], the sixth anniversary of the earthquake in Haiti came and went with little fanfare.

On the one hand, this could be a sign of moving on. As Gina Athena Ulysse has powerfully demonstrated, Haiti needs new narratives. Maybe the earthquake story has run its course, in the foreign memory at least. 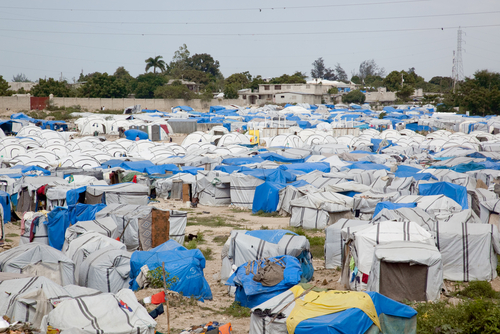 On the other hand, what is the story?

Last year, to mark the fifth, dozens of foreign journalists were on the scene. Last year, also on the 12th, Parliament’s terms expired, leaving President Martelly to rule by decree and newly-minted Prime Minister Evans Paul to run the government. The political story displaced a sober analysis of the impact of the aid response, while policies to close camps at all costs displaced people a second (or third) time.

This year, the political crisis has become the story, with the anniversary only a footnote and analysis of foreign aid almost nonexistent.

Six years ago the world wept with Haiti, and along with our tears came one of the most generous humanitarian responses in history. Private individuals contributed $3.06 billion, and governments and other official sources pledged $13 billion. By itself, the U.S. Red Cross received half a billion in private donations.

The sixteen-billion dollar question often posed is, where did the money go? Journalists have made valiant efforts to come up with answers: in addition to local radio and print outlets animating a spirited conversation here in Haiti, Ayiti Kale Je conducted dozens of investigative pieces. Jonathan Katz published a scathing account of the ineptitude of the foreign aid response. Justin Elliot and Laura Sullivan’s exposé of the Red Cross led to a Congressional inquiry. CEPR’s blog, Haiti: Relief and Reconstruction Watch details statistics of failures and manipulation of foreign aid, particularly USAID and its “Beltway Bandits.” Across the pond, Haiti Support Group kept the conversation alive in the U.K. and Europe.

Despite these efforts, the answers are often unclear.

What is clear to the majority of Haitian people is that the money didn’t go to them. Assuming that all pledges materialized, were sent to Haiti, and were distributed to every person there regardless of impact from the earthquake, it would have totaled $1,600 per individual, $8,000 for a household of five.

An honest answer must acknowledge that indeed some progress was made: roads are being repaired or asphalted. Government buildings such as the Cour de Cassasion (“Supreme Court”) and the l’Hôpital de l’Université d’État d’Haïti (the State University of Haiti, or “General Hospital”) are starting to come up. 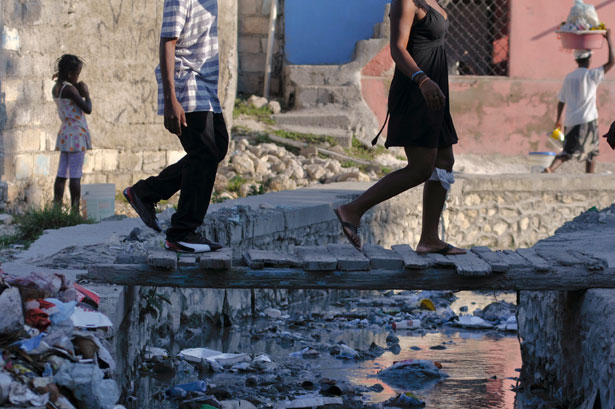 People walk across a tiny overpass as raw sewage flows beneath in an open sewage in Port-au-Prince. REUTERS/Swoan Parker

But these little signs of progress pale in comparison not only to the funds received, but to the need.

To put it quickly, Haiti was not “Built Back Better” as UN Special Envoy Bill Clinton promised it would. This cheerful slogan accompanied “Humanitarianism 2.0” – new ways of doing business, with local people and government in the driver’s seat, “lessons learned” from the 2004 tsunami.

Another of Bill Clinton’s slogans happened also to be the leitmotif of the Martelly administration: “Haiti Is Open for Business.” In addition to the business of spending billions of aid dollars, the postquake reconstruction was the pretext for a boon in foreign investment: new industrial park in Caracol, high-end tourism in Île-a-Vache, not to mention advances in gold prospecting.

The all-too-evident failures quickly led to a “blame game.” The first reflex was to blame the Haitian government and people. Commentators like Pat Robertson and the New York Times also pointed to Haitian culture.

Some of the coverage pointed the finger at foreign aid agencies, including NGOs. The shock and outrage was very real but it often led to ad hominem attacks against individual people and agencies, preventing us from seeing failures within the system itself.

Eventually the U.N. Office of the Special Envoy published lessonsfromhaiti.org – admitting three systemic shortcomings: first is that the model for humanitarian aid had rural settings in mind; second, a lack of coordination hampered efforts, linked to a weak state. 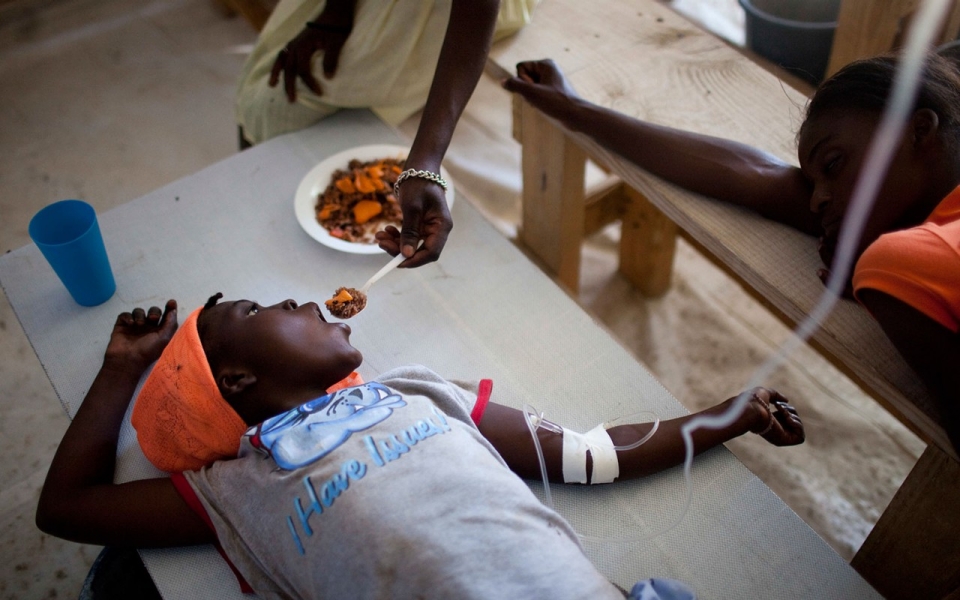 Janika Faneus is fed by her mother while receiving treatment for cholera at a Doctors Without Borders cholera clinic in Saint-Marc, Haiti, on Jan. 22, 2011. Rodrigo Abd/AP

Haitian analysts, from people living in the camps to NGO directors, drew additional lessons, moving well beyond these self-critiques.

First, experience in Haiti demands asking not only where did the money go but what did it do?

Many people in Haiti experienced the aid as an aftershock, causing damage of its own. These humanitarian aftershocks include breaking families up, stoking divisions within communities, disrupting solidarity networks, and an increase in violence against women. Even granting good intentions of foreign agencies, the way aid was delivered excluded the population, and the supposedly “universal” policies crashed into Haitian cultural realities and institutions.

People across the spectrum in Haiti detail how they were treated “like animals” or even “worse than dogs.” Ilionor Louis distilled an infantalization: aid agencies treated recipients like children, spending millions educating people how to wash their hands even as UN troops brought cholera to Haiti. Many foreign workers in the beginning earned $1000 per day, the equivalent of two families’ rental assistance for a year. The ways in which the aid was militarized made crystal clear whose lives were more important. If it’s not safe for foreign workers and their vehicles to enter a “Red Zone” or be out during a hurricane, local communities and aid workers are left to fend for themselves.

In addition to the exclusion and minimization of local experience and perspective, the humanitarian logic itself needs to be examined: structuring many responses is a “photo op.” Rather than ask people where they got their water before the earthquake, and repair the pre-existing public taps at a fraction of the cost, the “solution” of choice was private water trucks where people could be photographed standing in long lines. The same could be said of temporary, or “T-shelters.”

Camp leaders in Karade – now officially a “village” in order to not call it a camp and thus count residents as internally displaced people or “IDPs” – pose a very good question: why, if people needed schools, clinics, and housing, and people in the camps had skills as teachers, nurses, and masons, and billions in aid, this aid didn’t go to local people to create their own solutions?

The answers go far beyond the blame-game, requiring us to take a sober look at the humanitarian enterprise itself that was worth $22 billion in 2013, up from $17.3 the previous year.

And maybe we can learn from Haitian solidarity. One such success story is ITECA, in Gressier, finishing up a project building local capacity while working with residents on rebuilding their homes.

What will be the new narrative? Who will write it?

Six years later people are degaje, doing what they can. In addition to the dignified memorials to the earthquake, students and activists at the Faculté des Sciences Humaines held a memorial for professor/activist Janil Lwijis, murdered minutes before the earthquake.

In the memory of Janil, a fierce critic of foreign imperialism in any form, including NGOs, activists continue the struggle for justice. To be seen is how this mobilization challenges the narrative of the elections, scheduled for January 24 with only one presidential candidate.

Six years after the earthquake, it’s time to do away with the racist discourses that exceptionalize Haiti and see the humanitarian aftershocks in Haiti as a reality check.