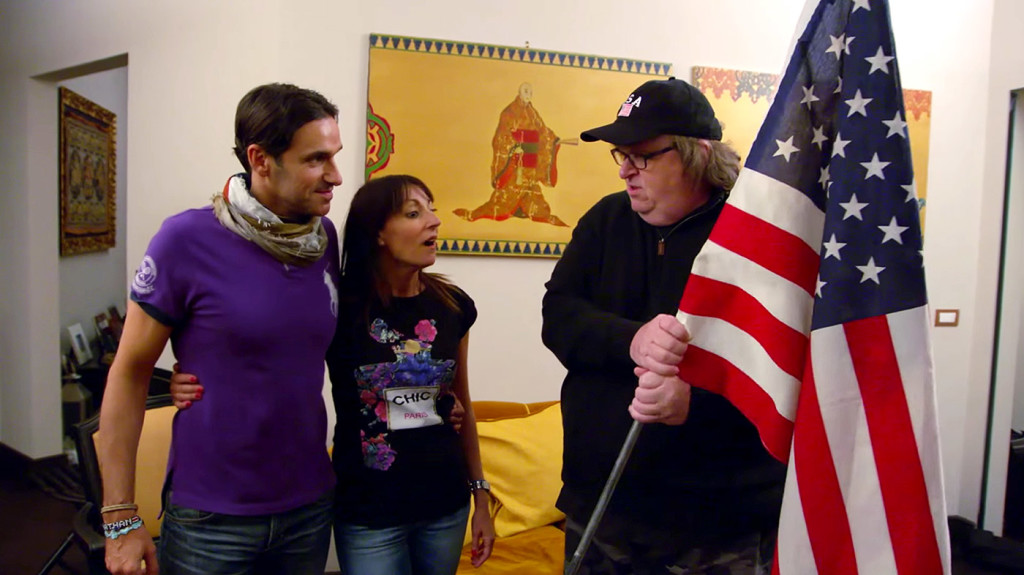 10 Feb 2016 – I can’t claim this is a neutral review of Where to Invade Next, Michael Moore’s latest movie. Beyond the fact that I worked for Moore for six years, including on his previous documentary Capitalism: A Love Story, I may literally owe my life to the high-quality, zero-deductible health insurance he provides employees.

What I’ve lost in objectivity, I’ve gained in knowledge of Moore’s career. I even know his darkest, most closely guarded secret: the original name of the 1970s alternative newspaper he started in Flint, Michigan. So I can say this for sure: Where to Invade Next is the most profoundly subversive thing he’s ever done. It’s so sneaky that you may not even notice exactly what it’s subverting.

On its surface, Where to Invade Next seems to be a cheerful travelogue as Moore enjoys an extended vacation, “invading” a passel of European countries plus Tunisia to steal their best ideas and bring them back home to America. For instance, French public schools have chefs who serve students hour-long, multi-course lunches on china, featuring dishes like scallops in curry sauce. I haven’t laughed harder at any movie this year than when the French 8-year-olds stare in perplexed horror at photos of American school lunches.

It’s all so upbeat in such an un-Michael Moore way that he considered calling it Mike’s Happy Movie. Certainly it’s the only time I’ve walked out of one of his documentaries and said, “Wow, everything is fantastic!” But what made me feel this way is the secret message hidden in Where to Invade Next — and if you see it, you’ll feel that way too.

To understand what I’m talking about, look at the trajectory of Moore’s major films, and how he consistently became more ambitious. With every movie he’s raised the stakes, each time aiming at a bigger institution and its claims that it knows best and is totally serious and in control and definitely nobody should laugh at it. Here’s the progression:

So where could anyone go from there? Once you’ve done capitalism, it’s hard to imagine there’s any larger nemesis. But as Where to Invade Next demonstrates, there is. 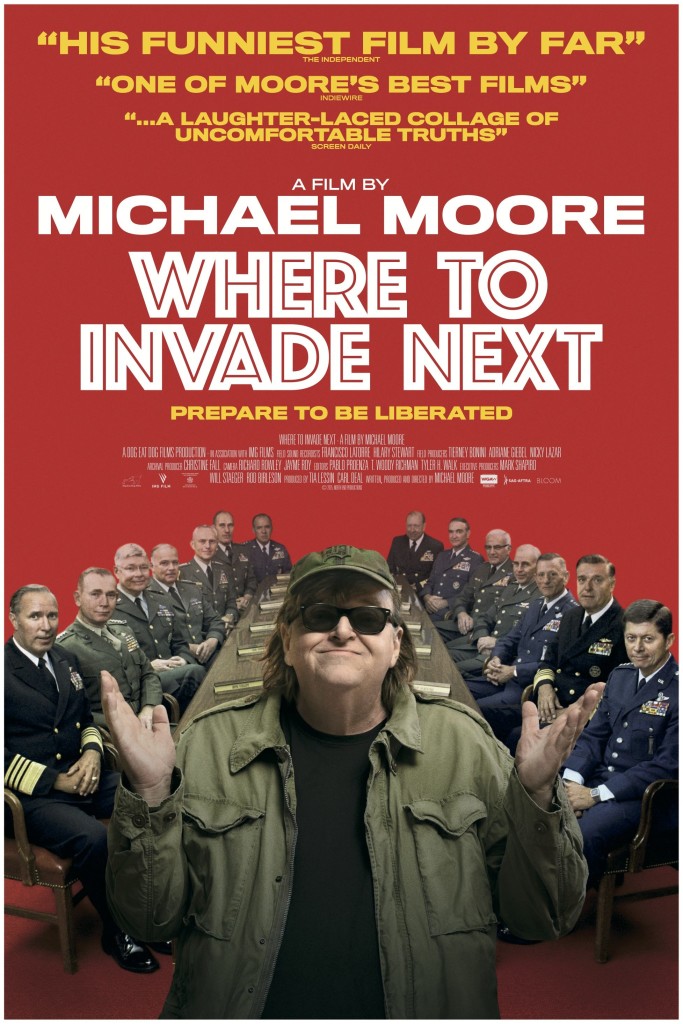 About halfway through Where to Invade Next, Moore visits an island prison in Norway that houses inmates who’ve committed violent crimes but are being rewarded for good behavior. It looks less like Oz and more like a frugal resort, with prisoners in regular clothes doing wheelies on bikes, fishing, and sunbathing.

In the prison’s kitchen, Moore talks to Trond, a convicted murderer with a huge tattoo on his face. Looking past him, Moore says: “Uh, I can’t help but notice that behind you are a whole bunch of very sharp knives.” And in fact there are a dozen of them, including a gigantic cleaver.

There also appear to be zero guards. Trond explains how many guards are at the prison on weekends: four. That’s for a prison population of 115. Plus, he says, the guards generally all stay in another building, leaving the prisoners to supervise themselves.

For most Americans, including me, this looks completely insane. But the prison warden, sitting at a park bench with birds chirping in the background, explains: “I don’t understand why you think this is a strange idea. … The main idea is just to take away their freedom. That’s the only punishment we are giving them. We are trying to help them back to society.”

The Norwegian philosophy is to create a normal environment with as few external controls as possible so that when prisoners get out, they know how to control themselves. It works so well that Norway has one of the world’s lowest murder rates, and its recidivism rate is about 20 percent, two to three times lower than in the U.S. (Moore also visits a standard Norwegian maximum security prison that’s less spa-like but totally free of the brutality and spiritual darkness of U.S. prisons.)

Moore’s visit to Portugal is also about its prison system, or rather its lack of one comparable to the U.S., thanks to its total decriminalization of drugs in 2001. Dr. Nuno Capaz, the Portuguese minister of health, classifies himself as a drug user: “Mostly alcohol, internet, a lot of coffee, some sugar.” When Moore points out that drug abuse may bring a lot of sadness to someone’s marriage, Capaz responds, “So? So does Facebook. Are we going to illegalize it?” The results in Portugal have been just as counterintuitive for Americans as Norway’s results, with drug use actually falling now that you can’t get arrested for it.

By the end of Where to Invade Next — after seeing working-class Italians with two months paid vacation, Finnish schools with no homework and the world’s best test scores, Slovenians going to college for free, and women seizing unprecedented power in Tunisia and Iceland — you may realize that the entire movie is about how other countries have dismantled the prisons in which Americans live: prison-like schools and workplaces, debtor’s prisons in order to pay for college, prisons of social roles for women, and the mental prison of refusing to face our own history.

You’ll also perceive clearly why we’ve built these prisons. It’s because the core ideology of the United States isn’t capitalism, or American exceptionalism, but something even deeper: People are bad. People are so bad that they have to be constantly controlled and threatened with punishment, and if they get a moment of freedom they’ll go crazy and ruin everything.

The secret message of Where to Invade Next is that America’s had it wrong all along about human beings. You and I aren’t bad. All the people around us aren’t bad. It’s okay to get high, or get sick, or for teenagers to spend every waking moment trying to figure out how to bonk each other. If regular people get control over their own lives, they’ll use it wisely rather than burning the country down in a festival of mindless debauchery.

Where to Invade Next is all the more powerful because it doesn’t tell you this, it simply shows you. It’s not speculation about how human nature will be transformed after the revolution so we’ll all be happy to share our ration of grass soup with The People. It’s all happening right now, with imperfect human beings just like us.

The movie ends with Moore visiting the remnants of the Berlin Wall, and remembering how he’d been there in 1989 and joined with all the Germans chiseling away at it. When he was growing up during the Cold War, he says, the one certain thing was that “This wall would never come down. Built to stand forever. Impenetrable.” But less than 30 years later it was gone. What America’s President of Documentaries is saying now is: Tear down these walls. We will be much better off without them.