Western Media Ignoring Reality on the Ground in Syria

3 Mar 2016 – This month, the Australian Broadcasting Corporation interviewed Dr. Bouthaina Shaaban, Political and Media Advisor to Syria’s President. The methods used to undermine Shaaban’s message should come as no surprise.

The interview was typical of the infrequent times corporate media has bothered to interview Dr. Shaaban: loaded lexicon, pre-priming the audience with false allegations about the Syrian government, repeatedly cutting-off the high-ranking guest, and a notably rude and condescending demeanor not afforded to guests who tow the NATO narrative on Syria.

As with other top Syrian representatives, Shaaban is made out to be “non-credible” by corporate media pundits when they deign to interview her. They actively work to discredit Syrian officials while at the same time putting forth claims that Wahhabi terrorists are “rebels” and “Syrian representatives” and those warring on Syria are “concerned” about widespread suffering in the country. 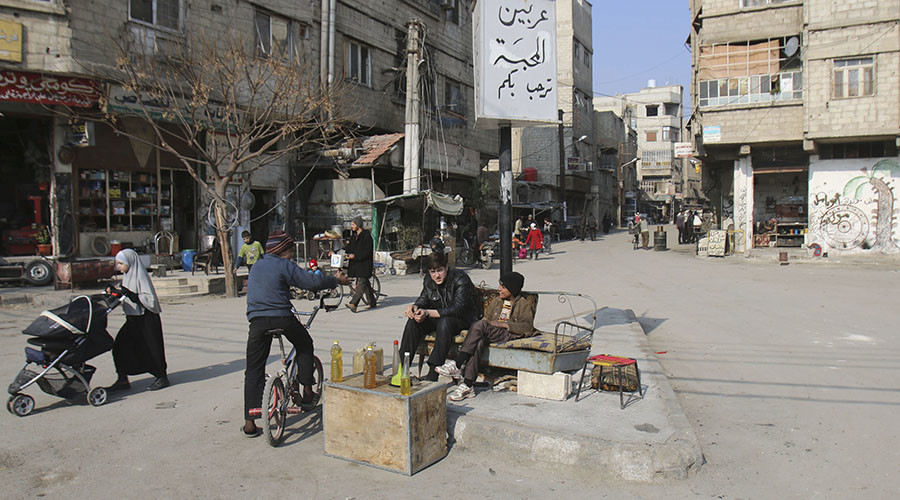 Sanctions: It is the Syrian People Who Are Suffering

Dr. Shaaban emphasized the Syrian realities at a meeting in her office in December.

A crucially-important issue that media pundits ignore is that of the crippling sanctions on Syria. In terms of how to provide actual relief to the Syrian people, Dr. Shaaban stated:

Stephen Gowans recently wrote about the US government’s long-time plans to topple the Syrian government, sanctions being one part of the plot.

“Documents prepared by US Congress researchers as early as 2005 revealed that the US government was actively weighing regime change in Syria. …As an alternative to direct military intervention to topple the Syrian government, the United States chose to pressure Damascus through sanctions and support for the internal Syrian opposition.” 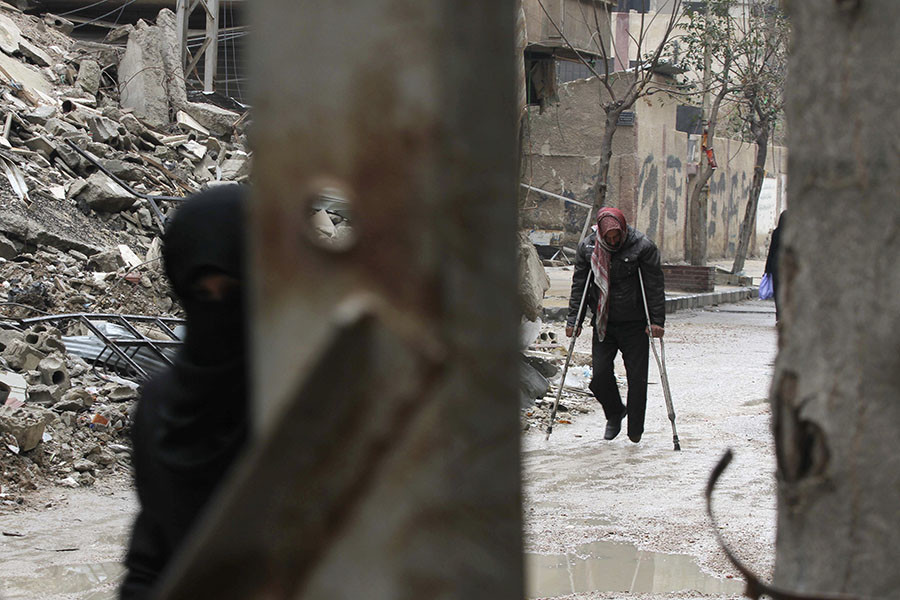 The advocacy website, End The Sanctions on Syria, notes: “Similar sanctions on Iraq in the 1990s were shown to have caused the deaths of more than half a million Iraqi children.”

The site went on to report that (as of May 2014), “701 of 1,921 Syrian health centres have been ‘completely gutted’ by the terrorist attacks. Yet rehabilitation of these centres is retarded by the US-EU sanctions, which have already left ‘a deep mark on the healthcare system’… including by blocking access to medicines, medical equipment, transport and communications.”

A May 27, 2015 article in The Lancet reports:
“The cost of basic food items has risen six-fold since 2010, although it varies regionally. With the exception of drugs for cancer and diabetes, Syria was 95 percent self-sufficient in terms of drug production before the war. This has virtually collapsed as have many hospitals and primary health-care centres.

Economic sanctions have not removed the President: …only civilians are in the line of fire, attested to by the dire state of household and macro-economies. Sanctions are among the biggest causes of suffering for the people of Syria.”

Journalist who returned from #ISIS HQ tells RT how jihadists can be defeated https://t.co/EO1nr5UOGA pic.twitter.com/xq7Q2mgeKE

From 2011 to May 2014, Russia (as well as China) has used its veto four times against unjust UN Security Council draft Resolutions against Syria. In September 2015, upon request of the Syrian government, Russian fighter planes entered Syrian airspace, from the start doing what the US-led coalition had purported it would do: targeting terrorist hotbeds in Syria.

In contrast, in the year and a half that the US-led coalition has been illegally violating Syrian skies, they’ve done little to stop terrorists’ movements and have repeatedly “accidentally” dropped supplies to terrorist factions, while terrorists transit through hundreds of miles of open desert, thereby prolonging the otherwise-real fight against terrorism being waged by the Syrian army and allies. 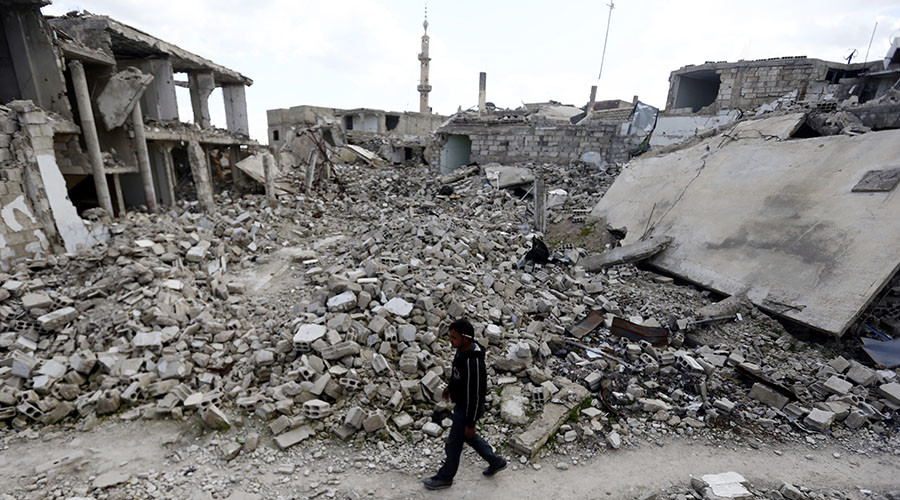 “The contradictory statements coming from the West are puzzling, to say the least. Even when he (US Secretary of State John Kerry) said we are not seeking regime change, the US ambassador at the UN (Samantha Powers) said President Assad had to go. Then, Kerry gave a statement in the Security Council that he agreed with Russia that it is up to the Syrian people to decide their destiny and their government. Then President Obama comes and says, no, President Assad has to go.”

Indeed, aside from being immoral and criminal, the various statements and actions of Western leaders are borderline-schizophrenic.

Obama has flip-flopped on his “Assad must go” position, his latest declaration alleging peace will not come “until Assad is out of power”.

Secretary of Defense Ashton Carter and Vice President Joe Biden have both flexed military muscles, saying America is ready to take “direct action on the ground” in Syria and ready for a “military solution” in Syria.

Kerry, in his most absurd Kerry-ism yet, is reiterating the “must go” line and waffling on about a “Plan B” and a “partition” of Syria.

On the inconsistency of American leaders’ positions on Syria, Dr. Shaaban told me:

“Here is the difference between them and Russia. If you take the statements of Putin or Lavrov from the beginning of the crisis until now, you find them consistent, in line with each other. You find them coming from a stand against terrorism, that countries have sovereignties, and that it is the people of these countries who should decide the future of the country, with no foreign intervention. All of their stands are in line with international legitimacy and with UN resolutions.

That’s why the stand of the Russians, for us, is a noble stand. As Putin said, they are defending the national security of Russia and Syria, which is true.”

“There’s no dialogue between us and Turkey, none at all. Turkey continues to support terrorism in Syria. If you imagine a Syria without an 800 km border with Turkey, these terrorists could not have come to Syria. Turkey is an accomplice in this war on Syria.

In Iraq, Turkey withdrew, because President Obama called Erdogan to withdraw from Iraq. This also shows that when the United States wants them to stop, they stop,” Shaaban said.

A recent article on Consortium News emphasized precisely this point:

“The U.S. traditionally has held tremendous power over client states like Turkey and Saudi Arabia. So, an order from Washington is usually enough to get such governments to back down.”

Referencing Turkey’s recent shelling of Azaz in Aleppo, it noted:

“Turkey’s attacks also are aimed at preventing the Syrian government from sealing the Turkish border where the Islamic State and other jihadist groups have smuggled across fighters, weapons and other supplies into Syria – as well as oil from Syria into Turkey.”

According to Dr. Shaaban, “Western countries keep silent about Turkey, Saudi Arabia and Qatar, because these are the three countries which are financing, arming and facilitating terrorism into our country.”

‘Our people are the victims of this terrorism’

On December 13, the day I arrived in Syria, terrorists rained more mortars than usual on Damascus. I asked Dr. Shaaban the pointedly rhetorical question of whether Western leaders condemned this or other terrorist acts in Syria.

“Nobody speaks about mortars hitting our cities, our civilians. These missiles are hitting our schools, our hospitals, and people on the street. They are not targeting the army.

Many countries have the technology which could detect these mortars and save the lives of civilians. But with the sanctions being imposed on Syria, nobody will give us this technology.”

The latest, a 28-page resolution, “covers asset freeze, travel ban, arms embargo and listing criteria for ISIL, Al-Qaida and associated individuals, groups, undertaking and entities,” the UN’s press release noted. However, given that the US itself continues to arm terrorists, it is likely this last resolution will not have the desired effect of truly stopping terrorism in Syria.

“Our people are the victims of this terrorism. Syria is a secular country, so many ethnicities and religions have lived peacefully together for thousands of years. Syria is an example of tolerance, of love,” Dr. Shaaban observed, before imploring Western people “to understand that in Syria, mothers, children, fathers, grandchildren… people, like any people in the world, would like to live in peace and security and are suffering from terrorism.”

Just before leaving Syria last December, I was invited to the Joy Choir’s Christmas concert. The day prior, President al-Assad and First Lady Asma al-Assad visited the practising choir. Photos and videos of the event evidence the choir’s delight at the drop-in. The following evening, the church was so packed that lines of hopeful attendees spilled onto the sidewalk. I mentioned this to Dr. Shaaban.

“I saw the photos. This is something that you cannot fabricate. You can see from their faces how happy they were,” Shaaban replied.

“I’m very proud of our people. Because President Assad went there the night before, you could expect that some people would be afraid to go, because it might be targeted by the terrorists. Yet the church was crowded. The people were determined to be there, whether it got targeted or not.”

The Notre Dame de Damas Church is indeed in close proximity to the terrorist-occupied area of Jobar, which regularly fire mortars, hell-cannons, and rockets on Damascus.

Indeed, on my December visit to various parts of Homs, including the Old City, there was evidence of the pulse of life: new shops and stalls opened; homes and restaurants rehabilitated.

A more recent example of this resilience involves the terror-bombed and ravaged neighborhood of al-Zahra’a in Homs, which I also visited in December. Tragically, it has been hit by terrorists’ car and suicide bombings three more times since the December 12th triple-blast bombings. After one of the more recent terror attacks, Dr. Shaaban noted on her Facebook page (translated from Arabic):

“My brothers live in this neighborhood and when I called them they told me that the streets have been cleaned and shops opened and people continued their work. This is the secret to victory in Syria.”

Eva Bartlett is a freelance journalist and rights activist with extensive experience in the Gaza Strip, where she lived a cumulative three years (from late 2008 to early 2013), arriving by boat as a part of the Free Gaza missions. She documented the 2008/9 and 2012 Israeli war crimes and attacks on Gaza while riding in ambulances and reporting from hospitals. Eva accompanied Palestinian fishers and farmers as they came under intensive fire from the Israeli army. She has been to Syria four times since April 2014 and works to convey the voices of a people suffering under the foreign war on Syria.