Tens of thousands are held in internment camps where they face severe restrictions on their freedom of movement. 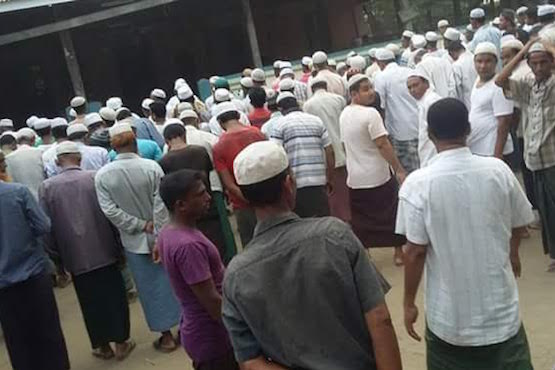 A funeral is held in Thae Chaung village for some of the Rohingya victims who drowned after a boat capsized off the coast of Myanmar’s Rakhine state April 19. (Photo from Peace Muhammad Arakani’s Facebook page)

21 Apr 2016 – The deaths of over 20 Rohingyas in a boating accident have again put the focus on Myanmar’s ill treatment of the Muslim minority.

Nine children were among the 21 confirmed dead from the accident that occurred in rough seas off the coast of Rakhine state April 19. The death toll is expected to rise, authorities said.

The victims were part of a group of more than 60 people from the Sin Tet Maw refugee internment camp who were forced to travel by boat to the Rakhine state capital of Sittwe due to travel restrictions.

The imposed restrictions almost make it impossible for those in the camp to access the city by road to buy food and provisions.

Kyaw Hla Aung, a Rohingya Muslim leader from another camp near Sittwe who was at the scene, said most of the passengers were women and children.

“The tragedy is because Rohingya are restricted from freedom of movement and can’t go to Sittwe via land,” Kyaw Hla Aung told ucanews.com April 20.

“This kind of accident may happen again if the government doesn’t allow us freedom of movement,” he said.

Rakhine is a religiously-divided state in the western part of Myanmar where about 120,000 mostly Rohingyas are confined to refugee camps in apartheid-like conditions. The camps were established after sectarian violence erupted between the Rohingyas and Rakhine Buddhists in 2012.

Those interned in the camps face severe restrictions on freedom of movement, limiting their access to healthcare, education and livelihoods, said a U.N. humanitarian report, March 31.

This makes the Rohingyas heavily dependent on humanitarian aid.

Poverty and persecution has led thousands of Rohingya to embark on perilous boat journeys across the Andaman Sea to Malaysia and Thailand, but numbers have fallen sharply since the November elections, which saw a civilian government take control of the country.

U Furuk, a Rohingya from Dar Paing camp near Sittwe, said that he doesn’t know of any boats that have left so far this year despite the poor conditions in the camps.

“We are still confined to the camps,” U Furuk told ucanews.com April 20. “We feel that we have lost our human dignity,” he said.

Myanmar doesn’t recognize the legal status of the Rohingya, with most people referring to them as “Bengali,” implying they are illegal immigrants from neighboring Bangladesh.

Nobel Peace laureate Aung San Suu Kyi has been criticized for her silence on the Rohingya issue and for a lack of details on how her party will protect the rights of the Muslim minority.

Neither the military-backed outgoing government nor the National League for Democracy accept the status of the Rohingya and have insisted that there are no Rohingya in Myanmar.