15 Apr 2016 – It sounds tedious, but the point is no less awful.  Nauru has ceased being a country, a state of any worth. It has assumed value as only one thing: a (non)processing centre for asylum seekers and refugees Australia does not want. A camp designed for criminalising rather than exempting; for condemning rather than assessing, has become the cruellest exemplar of modern treatment and disposition to the refugee. 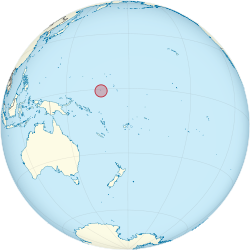 Nauru on the Globe with Australia to the left.

Along with fellow social worker, Michelle Groeneveld, reports were made about conditions of profound dehumanisation.  Inmates, noted Blucher, tended to be identified by their boat IDs. In other cases, a grotesque overfamiliarity was exhibited by camp guards keen for sexual quarry and congress.  “They would say things like, ‘hey baby, come and sit on my knee’.”  The overall strategy in this environment, argues Blucher, is one of conscious cruelty, one of not wanting to extend the hand of comfort.

The response by officials in Canberra was to sack such figures as Blucher and Groeneveld, both having been in the employ of Save the Children.  Their dismissals constituted a form of retribution against those deemed allies of the refugees.  Such eye-witnesses to camp cruelty had been nuisances from the start. Their removal was done with purpose.

Another tactic has also been used of late to crush the refugee spirit.  In one particular case, an individual was charged for having attempted suicide.  A statement from the Nauru government of April 12 revealed the dark, even anachronistic absurdity:

Noting that the charge is uncommon but nonetheless remains a criminal offence, the defendant pled guilty after being charged with Attempted Suicide contrary to section 312 of the Criminal Code 1899 following a disturbance at Nibok Lodge on January 21, 2016.

The language of the document is brutally directed against deterrence, using an old law to enforce a modern yet primeval circumstance.  The term “refugee” is mentioned in the headline, only to vanish before suggestions of opportunistic criminality.

Written submissions were made by the Prosecutor to impose a custodial sentence of between one and two months to deter other would-be-offenders who resort to self-harm to avoid lawful actions against them or to get what they want.

Attempts at suicide are thereby treated as undermining, and destabilising weapons. This conforms, at least, to a notable historical trend: the efforts by authorities to punish the individual who dared resort to taking away the living essence of oneself.

To keep one’s life going in circumstances of cruelty would be the greatest achievement of State, church or authority. To have that person take his or her life would be an admission of defeat on the part of those keen to possess, and control, that life.

By no means was this always the case.  Histories on suicide show an array of social reactions to the phenomenon of taking one’s own life. The response of those in European antiquity were less inclined to abhor the act.  The taking of poison, be it via medical means or that of an animal (a snake being popular), are dominant motifs, often encouraged by powers and authorities.

The modern response to tendencies to suicide in the Nauru detention centre is to render it pathological, to make it a product of psychic disturbance deemed inherent in the “manipulative” refugee.  You are not permitted to take your life – that would be an indulgence, an exaggeration of circumstances.

The steps were already being taken by State authorities in the nineteenth and then twentieth century, periods which saw the entire medicalization of suicide as a form of degeneracy.  This did not go unchallenged, with French sociologist Émile Durkheim suggesting that acts of suicide had to be seen as social facts, conditions initiated by environment and history.  His 1897 study was notable in suggesting four types of suicide, with fatalistic self-murder the outcome of circumstances of extreme regulation and discipline.

The march of the medical brigade on this was, however, irrepressible.  The person willing to take his own life was deemed sick, a disturbance to be monitored and controlled.  The mental asylum in due course met the refugee asylum, and in the modern detention centre we see titanic encounters between the forces that control life, and the autonomy of the inmates themselves.

Such ruptures in life are not seen as the torturous circumstances of privatised security, rapacious guards, and Australian governments keen to reduce humanity to refuse that just might turn suicidal. Suicide, attempted or otherwise, remains one of the last frontiers of human freedom.

Binoy Kampmark was a Commonwealth Scholar at Selwyn College, Cambridge. He lectures at RMIT University, Melbourne and can be reached at: bkampmark@gmail.com.