Nigeria: A Year On, No Word on 300 Abducted Children

Damasak is the largest documented school abduction by Boko Haram militants. Yet it has drawn far less public attention than the group’s widely condemned abduction of 276 school girls from a government secondary school in Chibok in April 2014. While 57 of those girls managed to escape, 219 remain captive almost two years later.

“Three hundred children have been missing for a year, and yet there has been not a word from the Nigerian government,” said Mausi Segun, Nigeria researcher at Human Rights Watch. “The authorities need to wake up and find out where the Damasak children and other captives are and take urgent steps to free them.”

On November 24, 2014, Boko Haram attacked Damasak, a trading town about 200 kilometers northwest of Maiduguri, near the border with Niger, blocking all four roads leading into the town and trapping residents and traders. The insurgents quickly occupied Zanna Mobarti Primary School, shutting the gates and locking more than 300 students, ages 7 to 17, inside, according to a teacher at the school and other witnesses Human Rights Watch interviewed. The Boko Haram militants then used the school as a military base, bringing scores of other women and children abducted across the town there as captives.

In February 2016, a woman who was at home in Damasak that morning told Human Rights Watch what happened:

It was early morning when I heard gunshots and chaos. My husband had already left home for the market so I grabbed my two children, a boy age four years and a girl age two years, and ran. But we ran into Boko Haram and they detained us in the middle of the town. They brought more and more women and children to where we were kept. Then they took all of us to Zanna Mobarti Primary School…I have not seen my children since then.

The insurgents separated the women from the children and the boys from the girls. Some of the women held captive later told Human Rights Watch they could hear the screams and cries of the children, but they were not permitted to go to them. Over the following weeks and months, the militants forced their captives to learn the Quran. A number of women and children died in captivity after they were fed putrid food, which caused severe vomiting and diarrhea.

The men who were captured by Boko Haram were kept at different locations, including an estimated 80 men in the house of the district head, a witness said. In the days and weeks following the attack, some of the men were forced to dispose of bodies left on the streets and in the market area. Scores of bodies were dumped into a nearby river and makeshift graves, among other locations. A witness forced to participate in the operation said he saw hundreds of bodies. 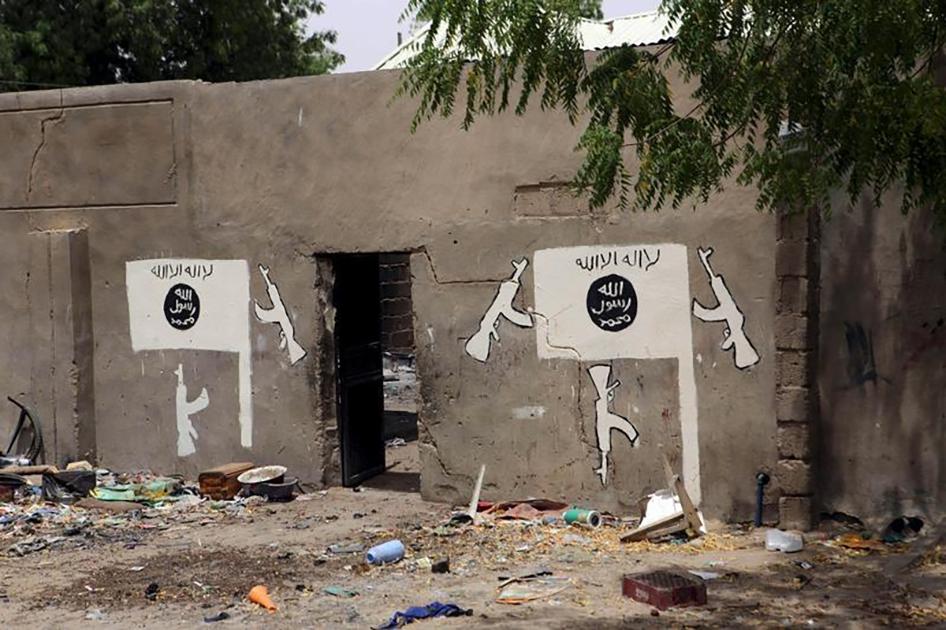 One teacher who had escaped from the primary school but was recaptured soon after told Human Rights Watch, “I was held captive by [Boko Haram] for at least six days…Corpses were on the street. They forced us to carry [the corpses] and go and dispose of them in the river and there is nothing one could do about it.” The insurgents shot several people who tried to escape by jumping into the river. One man who escaped by swimming across the river said, “Those that were able to swim escaped and those that couldn’t held on to the grass, and they were shot.”

Video footage and satellite imagery taken in late December 2014, obtained and analyzed by Human Rights Watch, confirms the presence of corpses in the riverbed.

Nigerian soldiers turned back a number of those who tried to flee to Maiduguri and other locations. The soldiers apparently were suspicious that Boko Haram insurgents might be hidden among those fleeing. A farmer who attempted to reach Maiduguri in a vehicle said that soldiers at a military checkpoint forced him and others back: “The soldiers turned people back to Damasak. They would not allow you to leave and if you tried, [the soldiers] would smash your car and burst your tires. So you had to look for another way out around the town or [try to cross] the river, if you can swim. It was terrible.”

Between March 13 and 15, 2015, soldiers from neighboring Chad and Niger advanced on Damasak as part of a cross-border military operation against the insurgents. As the troops approached, Boko Haram fled from Damasak, taking with them the 300 children and an estimated 100 more women and children they had been holding captive there.

The soldiers from Chad and Niger discovered scores of decomposing bodies near a bridge. Days later they brought journalists to the town to film and photograph the bodies. At least 70 bodies were counted in that one location. A local government assessment team discovered another 400 bodies in shallow graves and on the streets of the town a month later. When Nigerien and Chadian forces left the town, Boko Haram returned. The Nigerian government claimed in December that Boko Haram had been “technically defeated.” But former residents said the insurgents were still occupying Damasak.

Six witnesses now in Maiduguri whose children or other relatives were among those abducted told Human Rights Watch than none had been returned. Some parents have received information from Nigerian refugees in Chad that their children were seen with Boko Haram in Mari and Dogon Chikum, near the Nigerian border with Chad, though Human Rights Watch could not independently confirm this information. “There is no one you can go and cry to since the military have not gone to attack those places,” said one man who had lost relatives.

The Nigerian government has an obligation under domestic law as well as under international human rights law to take measures to protect its citizens from Boko Haram’s serious human rights abuses. The government has a corresponding responsibility to take effective steps to secure the release of the people Boko Haram has abducted from Damasak.

Boko Haram has committed widespread abuses during its six-year conflict with the Nigerian government. Its forces have indiscriminately killed civilians, abducted hundreds of women and girls, and destroyed villages and towns, as well as more than 900 schools.

“Whatever its grievances against the Nigerian government, Boko Haram cannot justify the abduction of young children,” Segun said. “Boko Haram leaders should immediately release everyone the group has abducted, cease all attacks on civilians, and stop using schools in support of its military efforts.”