A new kind of messaging could make it easier to appreciate the enormous benefits of moving away from a meat-heavy diet.

11 Apr 2016 – Over the last decade or so, the media have slowly but steadily fed the public information about the staggering impact of our meat-eating habits on the environment, and on climate change in particular. For instance, one recent study found that a global transition toward low-meat diets could reduce the costs of climate change mitigation by as much as 50 percent by 2050. From scientific reports and articles in magazines, to viral Facebook videos to documentaries like Cowspiracy and Meat the Truth, the news about the exorbitant contribution of a carnivorous to the greenhouse problem is clearly spreading.

However, despite all these messages, new research by my colleagues and myself shows that most people are still not aware of the full extent of meat’s climate impacts. We examined how citizens in America and the Netherlands assess various food and energy-related options for tackling climate change. We presented representative groups of more than 500 people in both countries with three food-related options (eat less meat; eat local and seasonal produce; and eat organic produce) and three energy-related options (drive less; save energy at home; and install solar panels). We asked them whether they were willing to make these changes in their own lives, and whether they already did these things. While a majority of the surveyed people recognized meat reduction as an effective option for addressing climate change, the outstanding effectiveness of this option, in comparison to the other options, was only clear to 6% of the US population, and only 12% of the Dutch population. 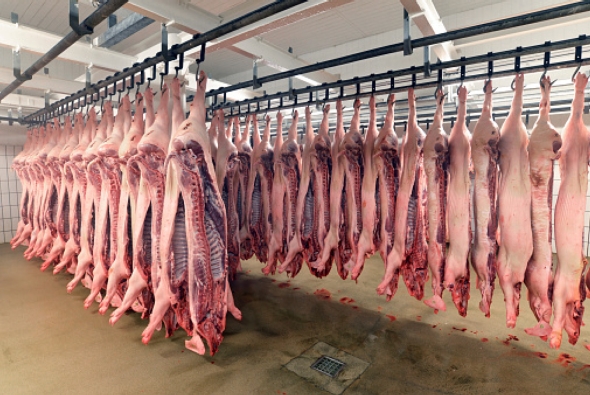 Sides of pork in cold store of a slaughterhouse. Credit: Westend61/Getty Images

That is remarkably low! Considering that climate change is one of the greatest challenges of our time, wouldn’t we want people to know the power of a simple solution that is in their own hands?

In terms of communication efforts for behavioral change, the outstanding effectiveness of reducing meat consumption could be a game-changer: knowing that it makes such a big difference may motivate people to change. This is particularly so, because the research results also show a direct relationship between this knowledge and people’s willingness to consume less meat as well as their actual meat consumption. So knowledge does seem to be power, in this case.

However, to put that last finding in perspective, this may not be a causal relationship. People who already eat less meat may be more open to hear and retain information on the climate impacts of meat, while people who eat lots of meat may be more inclined to deny or downplay it. That is, behaviors may inform knowledge as much as knowledge informs behavior. And as many studies have shown, although knowledge is an important aspect of behavioral change, it alone is rarely enough for people to change their lifestyles. Changing behaviors as intimate and culturally engrained as people’s daily dietary habits therefore demands a careful consideration of the psychological and cultural dynamics at play.

Currently, most communications around meat and climate change are in the category of ‘the pointing finger’, thereby creating guilt, shame, and stigmatization among committed carnivores, and activating psychological mechanisms of denial and downplay. Stating that eating meat is ‘bad’ therefore doesn’t seem to work that well.

However, for people who already identify as environmentalists, this strategy can be very effective. They tend to embrace this message, especially if the finger is pointed at an external other they are suspicious of (e.g., ‘the capitalist system’, ‘the meat-industry’). We see this in the success of Cowspiracy, which readily convinced countless people to ‘go vegan.’ Many of these people have a postmodern worldview, are aligned with environmental values, and are suspicious of the corporate influences in our economic system ~ so the message is easy to digest.

However, if these communications are hoping to convince the rest of the population, we urgently need to move beyond finger pointing tactics. This counts particularly for people with more traditional and modern worldviews, who generally don’t identify as environmentalists or hold strong green values. Perhaps this is the reason environmental organizations have been remarkably silent on the issue of meat consumption, and why the topic is still often lacking in discussions on climate change. Since we haven’t quite figured out how to communicate it in a non-paternalistic, non-judgmental way, most institutions stay away from meddling in affairs as personal as what is on one’s plate.

We seem to be in dire need of an inspiring and empowering narrative about climate change and the impact of our diets. The good thing is, the situation around meat is empowering, as it puts the power back in our own hands (and mouths). We are not at the mercy of the system, but have substantial influence ourselves. Likewise, it is that the most effective way by far for individuals to do their part tends to also lead to better health, weight control, creativity in the kitchen, and animal welfare. While environmental behaviors often involve sacrifices, the meat-reduction option offers a range of personal benefits.

According to a 2015 Chatham House Report “Changing climate, changing diets”, people in industrialized countries consume on average around twice as much meat as experts deem healthy. In the US the multiple is nearly three times. Adoption of a healthy diet would therefore generate over a quarter of the emission reductions needed by 2050! The invitation for people is thus not to give up their delicious steak and become vegetarian (something they may consider ‘extreme’), but rather to do something that serves themselves: eat a little less meat and get healthier. Become ‘flexatarian’, as people call this new trend. For a world that is also struggling with obesity and many other health problems, the news couldn’t be better; address two massive problems for the efforts of one.

In addition, this meat-reduction option fits seamlessly with an era in which the ‘consciousness movement’ increasingly influences mainstream culture. People pay more attention to the origins of their food, value their connection with nature, and generally show more concern for their health and well-being, including food habits and body awareness. We see this for example in the countless yoga studios popping up in big cities, the ‘hipness’ of organic food, the super foods that are nowadays also found in conventional supermarkets, and struggling fast food corporations like MacDonald’s. It also resonates with the ubiquitous search for ‘balance’. This means that the cultural evolution of society is moving in the right direction: we have the Zeitgeist, the spirit of the times, working in favor of us.

This is of crucial importance. As many authors have argued, the greatest potential for a shift towards sustainable lifestyles is through a change in culture and worldview—a shift in assumptions about human nature, our relationship with the (natural) world around us, and our aspirations for the ‘good life’. Food touches on social habits and norms; plays a role in mediating power and status; is often key to social participation and acceptance; and is expressive of collective values and identity. Consumption and lifestyles therefore tend to be shaped more by people collectively than individually. The most effective strategies thus engage people in groups, and give them opportunities to develop their understanding and narratives about food in dialog together.

One of my master students, Lena Johanning, translated this idea by developing postcards that humorously depict “flexitarian” superheroes on the front, with an invitation for a veggie dinner on the back, coupled with some amazing fact about meat and climate change. In that way, she framed plant-based dinners not only as environmentally effective, but also as fun and social, an opportunity for people to get together and explore.

Developing a range of approaches, including framing plant-based dinners around creative cooking and the deliciousness of vegetables, around the health and weight loss benefits, or around what it means for animals and our connection with nature, could be an effective way to speak to a wide range of people. Although no studies have been done to scientifically examine such approaches, considering what is at stake, it is certainly worth the experiment. Then, policy makers and environmental organizations can start to tap into and reinforce the changing culture and Zeitgeist. In that way, the change can start to accelerate, supporting us to collectively get better at creating the world we want.

Annick de Witt is a researcher at TU Delft, the Netherlands. She is co-author of the book Sustainability from the Inside-Out: How a New, Sparkling Consciousness Is Changing the World. Her website is www.annickdewitt.com