The Syrian Boy Soldier with a Thousand-Yard Stare: The Sad Image of Child Aged SEVEN

Puffing on a cigarette, a Kalashnikov AK-47 slung awkwardly across his little shoulders, seven-year-old Ahmed stands at a makeshift barricade in Syria.

He is one of the youngest fighters to be swept into his country’s civil war and something in his blank expression seems to hint at horrors that no child of his age should ever have to witness.

The picture was taken in the neighbourhood of Salahadeen, one of the front lines in the battered city of Aleppo. 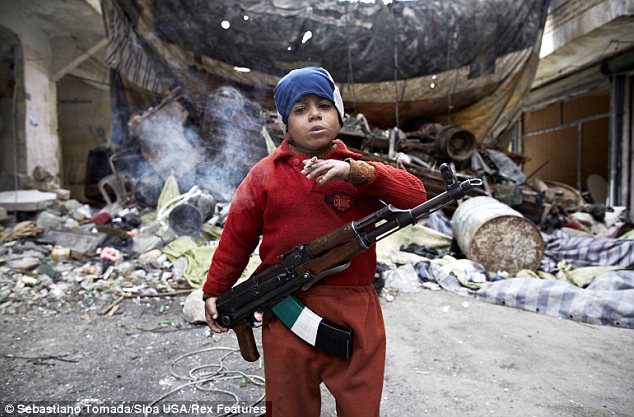 Little warrior: Ahmed, the 7 year old son of a FSA fighter, stands in front of a barricade where he assists his [NATO supported] Free Syria Army comrades in the neighborhood of Salahadeen

The son of a Free Syrian Army fighter, he is said to help operate a barricade that protects rebels from Syrian army snipers. 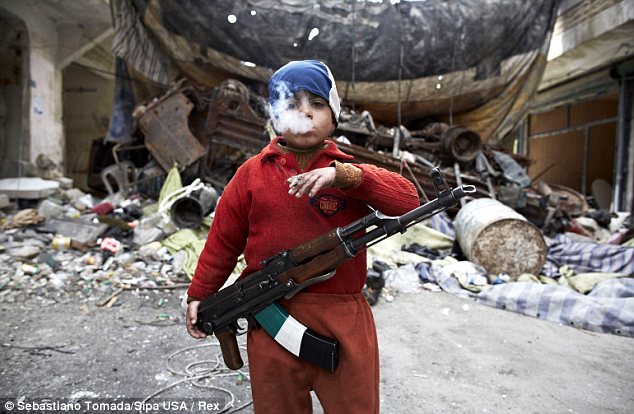 Children of war: The photo was taken in front of a barricade in the neighborhood of Salahadeen, Aleppo – the front lines of the bloody Syrian civil war

Ahmed seemed remarkably relaxed, his right hand and left elbow resting on the rifle, a pose likely to have been copied from the adult fighters around him.

Photojournalist Sebastiano Tomada Piccolomini, 26, took the picture on his second trip to Syria since President Bashar al-Assad has come under intense pressure to quit.

It is thought hundreds of children have taken ‘active roles’ in the conflict, including running supplies and carrying messages between front-line units. 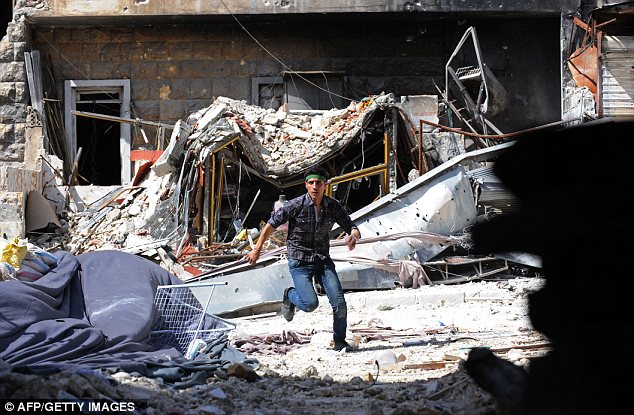 Conflict: A Syrian opposition fighter runs for cover from Syrian army snipers during clashes in the northern city of Aleppo 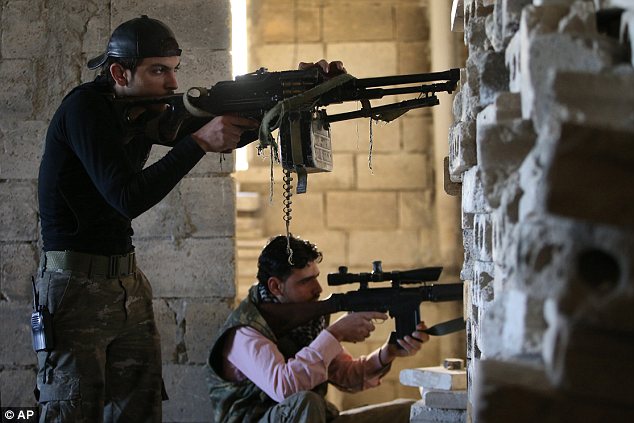 Fighting back: Free Syrian Army fighters take their positions as they observe official Syrian army forces base of Wadi al-Deif, at the front line of Maaret al-Numan town, in the Idlib province

The photograph emerged as Samantha Cameron, on a visit to Syrian refugees in Lebanon, claimed innocent childhoods were being ‘smashed to pieces’ by the civil war.

The Prime Minister’s wife – an ambassador for Save the Children – said: ‘It is horrifying to hear the harrowing stories from the children. No child should ever experience what they have.’

Rebels have reacted with anger to a refusal by Nato to supply  Patriot missiles to protect them from Assad’s jets.

2 Responses to “The Syrian Boy Soldier with a Thousand-Yard Stare: The Sad Image of Child Aged SEVEN”