How U.S. – funded enforcement of prohibition has contributed to violence in Latin America must be highlighted at the UN drug policy meeting this week. 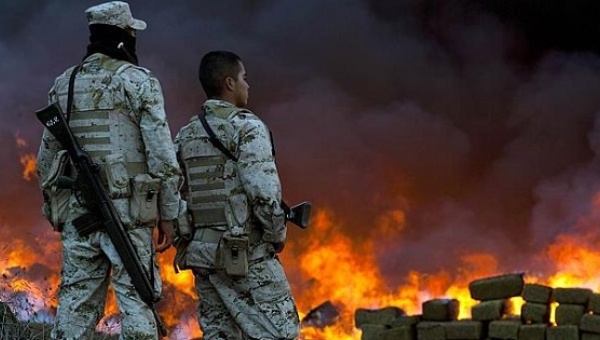 18 Apr 2016 – From April 19-21, the United Nations General Assembly will hold a special session on drugs in New York City. This meeting, called UNGASS for short, is a critical space from which the 193 member states of the U.N. could move toward adopting more humane drug policies worldwide. The special session on drugs was called for by three countries in which the militarized enforcement of prohibition has been at the root of violence and terror: Mexico, Colombia and Guatemala.

Prohibition is not a hands off way of dealing with social, health or economic issues, rather, it is “an extreme form of government intervention,” according to Mark Thornton, author of “Economies of Prohibition.” Narcotics prohibition got its start as laws making certain drugs illegal were passed in the early twentieth century, spearheaded by the United States and later upheld by the U.N. From the outset, narcotics prohibition was a political tool used as a way to criminalize and target communities and individuals based on race and ethnicity.

Prohibitionist logics got a boost in the 1960s and 1970s as they were deployed by countries across the Cold War political spectrum in order to criminalize youth and social movements worldwide. Within the United States, drug prohibition has been a key contributing factor to the realization of what Angela Davis calls the “prison industrial complex” and what Mumia Abu Jamal has deemed “mass incarceration and [the] racialized prison state.”

Over time, the institutions created to enforce narcotics prohibition have become established parts of the U.S. state repressive-judicial apparatus, thus threading a dependence on maintaining prohibition into the fabric of the state. Every year since 2003, United States federal funding for demand reduction (treatment and prevention) has been lower than for supply reduction (domestic policing, interdiction, international), with the vast majority of supply reduction going to police forces nationwide. That balance is slated to shift in 2017.

Today, funding to uphold prohibition is spread across nearly the entire U.S. federal government, with 13 of the 15 Executive Departments that make up the federal Cabinet slated to receive a segment of the $31.1 billion in funding to support the National Drug Control Strategy in fiscal year 2017. The only cabinet level departments in the US government that do not receive money for the fight against narcotics are the Department of Commerce and the Department of Energy.

If reducing drug use in the United States were the primary political motivation behind these programs, it would be an obvious choice as to which kinds of policies would be put in place. But as we have seen domestically and internationally, there are political implications to prohibition enforcement which cannot be calculated using the metrics of the availability of narcotics and/or their use. “Conventional drug policy has survived for so long despite compelling evidence of abject failure because dysfunctional policy has been good politics,” in the words of Alex Wodak, President of the Australian Drug Law Reform Foundation.

According to the U.S. government, international supply funds are used to “disrupt” and “disband” trafficking organizations, carry out investigations and gather intelligence, carry out monitoring and interdictions, and to enact policy changes and development programs in target nations. In 2017, the international supply funds requested for the drug war are to be doled out as follows: Department of Defense International Counternarcotics Efforts ($567.1 million), Drug Enforcement Agency ($467.9 million), Bureau of International Narcotics and Law Enforcement Affairs ($382.4 million), and the US Agency for International Development ($131.9 million).

In Mexico, the U.S. government has provided $1.5 billion “worth of training, equipment, and technical assistance” through the Merida Initiative since 2008. It is estimated that Mexico spent $79 billion over the same time period on security and public safety. In Colombia U.S. spending on Plan Colombia was much higher, at over $10 billion since the year 2000. Over the same time period, Colombia spent $200 billion on the drug war.

As I detail in my book Drug War Capitalism, the militarization of the enforcement of prohibition has allowed the U.S. government to push policies of social control through violence and militarization in Latin America; but it is host governments who provide the majority of funding for these wars against their own populations. Plan Colombia and the Merida Initiative have had devastating social consequences, spurring violence and terror, spiking murder rates, pushing up disappearances, and increasing forced displacement.

The draft resolution for UNGASS includes a pledge to continue with international supply reduction efforts, through “more effective drug-related crime prevention and law enforcement measures.” Though some positive change may come out of the UNGASS special session on drugs, it will remain up to activists and social movements in the north and south to continue to push back against militarization connected to the war on drugs.

Dawn Paley is a journalist and author of Drug War Capitalism, AK Press 2014.