The Great Event – A Pot Kumbha with Nectarine Drops

Kumbha Mela at Ujjain with entry of sun in Aries and Jupiter in Leo has a special significance. When, sun emits gigantic radiations with nectarine drops. It is the great event on the Earth. It has given the way for origin of life with cordial atmospheric conditions on earth. To preserve the ancient wisdom, the Kumbha Mela is celebrated with every twelve years cycle.

The pot Kumbha signifies the immortal DNA as instrument of life, phonon beholds life consciousness and food metabolism is source of life. The Ascetics with different ideologies gather at one place to celebrate the great event of origin of life on the Earth. The sapient beholds the life consciousness adorned to cell body with different genetic identity in DNA to cherish the life.

During the cosmology a pot of nectarine drops was shed, it is immortal drop of Amrit for the creatures. The life blossom like flower with the nectarine drop and leaves feed the creation with photosynthesis.

It has been expressed the life is like birds their nest upon the tree Rig. 10-127-4

The pot represents DNA is like vessel for life and the DNA nucleotide blossom like flower with chemical energy of photosynthesis.

The shading of DNA nucleotide base pair and Chlorophyll pigment with cosmological event is the great event, it has given the way for origin of life on the earth with development of cordial atmospheric condition on earth, the magnetosphere and ozone layer has given the way for origin of life with photosynthesis and generation of immortal chemical energy. It has brought biodiversity with food chains and food webs in nature. This great event is celebrated after every twelve years of cycle with entry of sun in Aries and Jupitor in Leo known as Simhasth Kumbha festival at Ujjain M.P. India, where the Great temple of Lord Mahakal is situated there is the gathering of 75 Lac people to take holy dip in Kshipra river.

On other hand Kailash temple at Ellora caves is not built.

All is cut and carved from ONE single piece of rock with high laser technology beyond imagination. It explores their wisdom of cosmology, creation and life in systematic manner with symbols. Its text is in the Vedas and mythology of Shiva Puran. My friend Christel has drawn attention on this by sending photographs of the Shrines and video, it has inspired me to prepare the article.

Who we are? Why we are here? What is the purpose of life? It is the quest of human mind from dawn of civilization on the earth. The great Scientist Einstein spent his last twenty years in search of Grand Unified Force after enlightening the world with his theory of relativity. Its answer is in the Vãk voice, which is close to every one and far away too also.

The voice is the first to appear with life consciousness and whatever the object has its existence is due to voice sound, which is complimentary with light spectrum, and cause of existence of every thing. It has evolved into thought and words with evolution of life. The wise men have created the language for communication. It is imprinted in the mind as blessed sign of friendship in life. It is essence of creation and life on the earth.

It has been explored on carving of Kailash Temple at Ellora. The great event is the activation of vital energy with its dualistic force photon and phonon. The gigantic burst generated the purine and pyridine base pair of DNA with triple bond of hydrogen. Simultaneously, the generation of Chlorophyll pigment with cosmological event is another great event. It has converted light energy into chemical energy with photosynthesis and given the way for origin of life on the earth. It has been expressed by a pot Kumbha with nectarine drops. 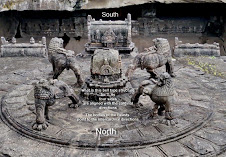 The great event is the manifestation of the vital energy in pre-cosmic dark atmosphere with blast and light. It has manifested first as radiant flame ‘Jyotirlinga’.

The creation is supported by ageless vital energy from cosmos just like a pillar ‘Skambh’ He is one and all. All are connected with him like branches round about the trunk of a tree. He is like pillar in the centre. The components of the nature synthesized from him and merge in to the same with time. (According to the Einstein E=mc^2 relation).

The Shiva in trance is personification of calm and quiet unfathomed dark cosmos. The Sati Parwati is personification of resonant phonon wave with ripper. It has activated the dark matter with blast and light. The vital energy manifested with its dualistic force photon and phonon. They are interconnected at molecular level with complimentary spectrum of resonant electromagnetic rays.

The phonon disintegrates the photon with electron configuration and half spin changes in wavelength. It has been expressed by two lion back to back on the roof of Mandap.

Ancient wisdom of Creation and Life

All elementary particles are vibrating with their respective charge. The resonance of vibration and resonant from lowest musical note to its highest pitch of electromagnetic rays are complimentary with each other. They find their resonant with which they are in resonance. The further evolution lead by seven complimentary visible rays of light and audible seven syllables of voice, they drove them forward with their spirit. The voice has seven syllables synonym to seven rays of visible light, but opposite and complimentary with each other.

The vibration of elementary particles expressed by cosmic dance of Nataraja

The Bell type structure and dot in the centre Higgs field

The bell type structure with dot in the centre; the underlying space imparted mass to elementary particles with asteroids and planets. It is aligned with four lion beast at four cardinal points. It has four concentric circles with 36 petals each.

Natraj signifies Vibrations of elementary particles with resonance with this photon-phonon interaction brought forth the creation in existence with four components of atom, three subatomic particles and energy lay down the foundation of the creation with underlying space, it is molecular choreography, where atoms and molecules choreograph their own behaviour in series with asteroids and planets.

The structure of DNA

Four are his horns, three are the feet that bear him; his heads are two, his hands are seven in number. Bound with a triple bond the Steer roars loudly: the mighty God hath entered in to mortals Rig.4-58-3

The four horns – The four horns is a symbolic expression for four bases of DNA, they are universally present in the living-beings,

Two head- The two helix of DNA are just like his two head.

Seven hands- The triplet nucleotide pairs have two hydrogen double bond and a hydrogen triple bond. = it is just like the seven hands for actions.

Triple bond – The DNA replication and synthesis depends on the hydrogen triple bond, it has been explained by saying that ‘bounds with the triple bond the DNA roars loudly just like a steer.

The DNA is universally present in the living-beings, they are subject to birth and death, hence it has been expressed that the mighty God-DNA has entered into mortals.

A pot Kumbha with nectarine drops

During the cosmology a pot of nectarine drops was shed, it is immortal drop of Amrit for the creatures. The life blossom like flower with the nectarine drop and leaves feed the creation with photosynthesis.

It has been expressed the life is like birds their nest upon the tree Rig. 10-127-4

The pot represents DNA is like vessel for life and the DNA nucleotide blossom like flower with chemical energy of photosynthesis.

The Garland, flower and sixteen square pillars in side the dome express the life consciousness.

The five gross elements, five sense organs and five working organs of body with vital energy held up the physical body like 16 pillars. The DNA with four bases is instrument of life with 64 triplet genetic codes. With this the life consciousness adorned to body in the womb activated the DNA code to execute the function of life. The life blossom like flower on the tune of 64 genetic code and phonon adorned to body beholds life consciousness. The whole play of life on the earth is controlled by 64 genetic codes. It has brought biodiversity in nature with genetic recombination.

The Garland in the hand of Devas deity expresses that the cellular body developed from DNA as instrument of life and phonon beholds life consciousness adorned to body. With this the body is connected with universe and cell body magically holds the life.

The one become many with its dualistic force phonon and photon. The Brahma‡ intellectuals call him with different names. He is the soul and eye of the creation. Whose eye controls the whole creation from highest heaven, He is working just like eye grasp the image and stimulate thoughts in brain in multiple ways.

The phonon with its dualistic force beholds the life consciousness to execute the functions of life with development of sense organs from fertilized DNA. The DNA is vehicle of vital energy with life. The Nandi bull, out side the shrine represent the same.

Prof. Chandra P Trivedi, with incredible amount of experience as professor, researcher and Principal of lead college, Bhind and Ratlam under Jeewaji University, Gwalior, and Vikram University, Ujjain respectively. As an academician author of more than 10 books, his books and work has been published in many leading papers of the subcontinent and books from India and Germany. He is former senior fellow, Department of culture, Govt. of India, Associate IIAS, Shimla. As a Professor and Scientist, he has gone into the depth of Yoga, Meditation, Spiritualism and Vedas at Vedic Research Institute, Ratlam. He is among original thinker with innovative approach to solve the national problem. He explored India’s glorious past with answer of Einstein’s Grand Unified Force. As an academician, Vedic Scientists and professor, he has first time crack the Vedic code with oldest un-deciphered symbols of the world ‘Advanced gene technology’. Going ahead Prof. Trivedi has given the answer of modern problems related with origin of life consciousness and Higgs field 2013. E-mail: atcptrivedi@gmail.com

This article originally appeared on Transcend Media Service (TMS) on 30 May 2016.

Anticopyright: Editorials and articles originated on TMS may be freely reprinted, disseminated, translated and used as background material, provided an acknowledgement and link to the source, TMS: The Great Event – A Pot Kumbha with Nectarine Drops, is included. Thank you.