23 May 2016 – The economy, the people, the heart and soul of Greece have been demolished by a lower order of bureaucratic seizure that plagues the world. It is scorched-earth economic warfare, ordinarily referred to as neoliberalism. 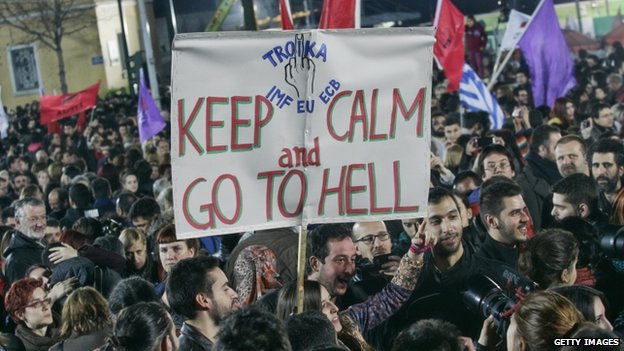 The newest twist/manipulation in negotiations with Troika for Greece survival (demise) in order to provide the country with €86 billion of which 90% pays off debt, 10% to the state, demands Greece cut pensions (again), raise taxes (again), privatize state assets (for a song), and deregulate (squelch) labor. Inspirational?

The country has already unloaded state assets like ports and airports at bottom-feeder prices. Gee whiz, after essentially giving away prized state assets, which “define the Greek economy and define the people,” GDP is expected to grow. How?

For example, the sale of Port of Piraeus, one of the largest seaports in Europe and the world, has served as the port of Athens since ancient times. The sale, effective April 2016 to COSCO (Chinese company), is part of creditor demands to secure a third €86 billion bailout package. The sale goes against PM Tsipras’ pre-election promise not to privatize the country’s infrastructure. But, in milquetoast fashion, he knuckled under.

Already, because of stringent austerity measures, Greece is hamstrung and thus because of a resultant shrinking budget, the country cannot alleviate pain in the streets; i.e., help its people. King Louis XVI of France (beheaded in 1793) had a similar problem 223 years ago. At the time, Parisians were starving in the streets, scrunched under the wheels of golden carriages.

John Kenneth Galbraith, one of America’s foremost economists, famously said, “All successful revolutions are the kicking in of a rotten door.” Today, his son carries his torch.

The final minutes of his speech succinctly sums up the fate of Greece at the hands of Troika, consisting of the European Central Bank (ECB), the European Commission (EC) and the International Monetary Fund (IMF), which launched a powerful supersonic heat-seeking missile, affectionately nicknamed “Troika Boy” boldly emblazoned in cursive on its warhead, successfully hitting its target dead-on, total destruction! 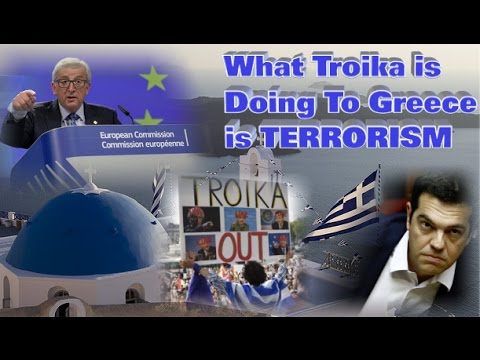 According to Professor Galbraith:

The decision taken at the European level was to attempt to destabilize and to defeat the government [Greece]. In the end, the government, in effect, defeated itself. It made a decision that it did not have the capacity to push a confrontation past a certain point. The Greek people took a different view. They were braver than their government. And, so came… the capitulation… to terms that were effectively dictated entirely outside of Greece.

Paraphrasing Mr. Galbraith, the process is essentially (1) a debt collection, (2) a land grab, (3) foreclosure policy, and (4) a backbreaking “policy of taking as much as possible of the state’s assets.” As a consequence, the dictates of Troika rapidly bring on bankruptcy of businesses as well as many households into default followed by foreclosures. A Greek bailout?

In a nutshell, Troika’s missile launch brings “the dispossession of a European population from the ownership of capital assets,” or looked at another way, as between nation/states, an act of war.

Bottom line, the people are stripped of assets in lieu of paying debts from which they benefitted very little. The upshot, according to Mr. Galbraith, a spirit of rebellion is growing and spreading, likely beyond Greece to Portugal, Spain, and Italy.

Since in Greece there is no longer a political outlet, it will become more unpleasant as the fires burn. That’s the price ultimately that both Greeks and Europeans will bear from accepting a set of policy recommendations dictated by economists, driven by ideology, utterly disconnected from the reality of what it takes to restore a viable economic and social entity. (Galbraith)

By all appearances, the Troika group is not clever enough to help Greece by any means other than slashing and burning and stomping on its lifeblood. Which brings to mind Chile in the 1970s under General Augusto Pinochet, dictator 1973-1990, a student of Milton Friedman and Henry Kissinger and of how neoliberal tendencies have been superlatively perfected over the ensuing decades. Troika’s 100-proof.

“There will be more resistance,” Galbraith warns. “It’s the only sensible thing. The Greek people are being maneuvered into a position where they cannot pay their mortgages, and they are being dispossessed from their homes. For what? For debts that were incurred under previous governments for completely useless things where the benefits went to German construction companies and French arms firms. The notion that this debt should be paid is absurd.”1

Galbraith believes a Greek default may still be likely, which will bring a stop to unsustainable austerity. Come to think about it, why not?

Robert Hunziker (MA, economic history, DePaul University) is a freelance writer and environmental journalist whose articles have been translated into foreign languages and appeared in over 50 journals, magazines, and sites worldwide. He can be contacted at: rlhunziker@gmail.com.