‘Unbounded Organizing in Community:’ As the Economy Fails Us, Community Calls Us 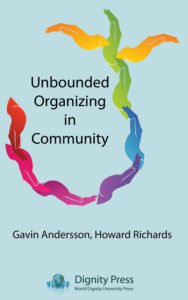 THE BACKGROUND:  Asset Based Community Development (ABCD) began in a black church in inner city Chicago when the congregation realised it would either have to give up, close the church, and move to the suburbs, or else take steps to rebuild their community.

The economy was failing them.  Investors were not saving their neighborhood by creating jobs.  Community called them.  They had to start with what they had and who they were.

Today ABCD is a worldwide movement documented and promoted by an Institute at Northwestern University in Evanston, Illinois.

THE FOREGROUND:  Now a new book, a new hands-on step-by-step guide adds an ABCD perspective from the Global South, building on theory and practice from North East Brazil, from rural Botswana, from Chile, and among many other venues South African townships where the unemployed are a majority.

“Packed into this small book are truly big things, big ideas, examples of big practices which speak clearly and intelligently into the challenge of living and building a world together in ways that sustain us as individuals and as groups.”
— Crain Soudien, CEO, Human Sciences Research Council, South Africa

“An inspiring theory of social change and a road-map for putting it into practice.”
— Alicia Cabezudo, Professor of Education, National University of Rosario, Argentina; Vice-President, International Peace Bureau, Geneva. Member of the TRANSCEND Network for Peace, Development and Environment.

Gavin is Managing Director of Seriti Institute www.seriti.org.za  in South Africa and co-creator of Kwanda, a reality TV series on community organising beamed to SA and neighboring countries. He holds a doctorate in development studies from the Open University.  His doctoral thesis develops the theory of unbounded organization that is simplified and summarised in this short practical book.

Howard, a North American expat living in Chile, claims to be in the apostolic succession of organizing, having learned organising from Cesar Chavez, who learned it from Fred Ross, who learned it from Saul Alinsky.  He founded the Padres e Hijos program in southern Chile, which combines community development with parent education, and is the author of The Evaluation of Cultural Action, a book on how to evaluate programs inspired by Paulo Freire’s philosophy. Howard Richards is a member of the TRANSCEND Network for Peace, Development and Environment..

Anticopyright: Editorials and articles originated on TMS may be freely reprinted, disseminated, translated and used as background material, provided an acknowledgement and link to the source, TMS: ‘Unbounded Organizing in Community:’ As the Economy Fails Us, Community Calls Us, is included. Thank you.