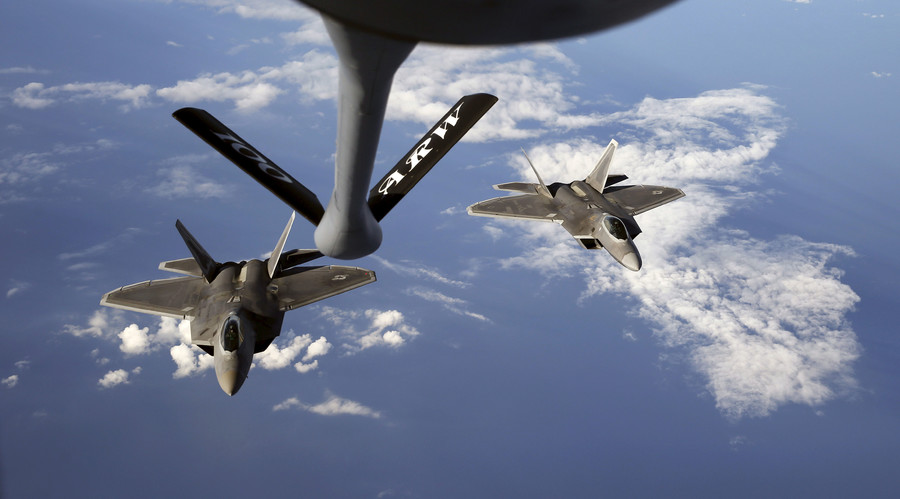 17 Jun 2016 – With US military bases breeding faster than McDonald’s franchises, and 28-member NATO smashing up against Russia’s border, antagonizing Moscow with war games, the West continues selling the pulp fiction of ‘Russian aggression’ to an increasingly suspect audience.

In the latest serving of steaming rhetoric designed to make Westerners tremble and quake at the very mention of the name ‘Vladimir Putin’, a Newsweek article proclaims in its apocalyptic headline, “How and Why Russia is Moving to a War Footing”.

Russia has been found guilty – by the non-jury court of NATO opinion – of carrying out the very same task that every nation performs if it hopes to maintain its sovereignty: spending money on modernizing its forces.

The author of the hit-piece, Andrew Monaghan, nervously describes the funds the Kremlin has set aside for military expenditures as “impressive figures.”

In 2010, Russia “committed $610 billion to a decade-long transformation process… ensuring that at least 70 percent of military equipment is modern, including the procurement of thousands of pieces of high performance and heavy equipment, such as tanks, artillery, military aircraft and naval vessels,” Monaghan wails, as if Russia had just invented the concept of national armies.

The author fails to mention, however, that the US Pentagon spends about that much every month feeding the voracious appetite of its vast military empire. And since global conflagrations have been erupting in direct proportion to how far NATO forces wander abroad, many countries do not perceive this US-engineered monster as a remotely positive thing. Indeed, they see it as a direct threat to their national survival.

Russia, which finds itself on the front line of the encroachment, wasted no time modernizing its military after coming to the realization that Washington’s pledge of cooperation with Moscow against terror, not to mention the US-built missile defense system in Eastern Europe was an elaborate fraud, designed to lull Russia into a false sense of bilateral security with the global superpower.

Washington’s “anti-Russian policies have convinced the Russian leadership that making concessions or negotiating with the West is futile. It has become apparent that the West will always support any individual, movement or government that is anti-Russian, be it tax-cheating oligarchs, convicted Ukrainian war criminals, Saudi-supported Wahhabi terrorists in Chechnya or cathedral-desecrating punks in Moscow,” wrote Dr. Evgenia Gurevich, Dr. Victor Katsap, Dmitry Orlov and A. Raevsky.

At the same time, Western media and think tanks regularly accuse Russia of harboring evil designs towards neighboring states, and despite the fact that Russia has not given the slightest indication of threatening behavior.

Consider this opening line of a recent article in Foreign Policy, citing a Rand Corp. study, that certainly sent shudders across the tiny Baltic States: “If Russian tanks and troops rolled into the Baltics tomorrow, outgunned and outnumbered NATO forces would be overrun in under three days.”

The article was published on the same day US Defense Secretary Ash Carter announced a $3.4 billion plan to add more heavy weapons and armored vehicles in Eastern Europe and the Baltic States. In other words, a very nice payday for numerous American defense contractors, who now want debt-riddled Eastern European countries to crack open their wallets and donate or go it alone against the invisible menace of ‘Russian aggression.’

“And our estimates for 2016 indicate a further increase of 1.5 percent in real terms this year. This is progress. But I will call on allies to keep up the momentum, and to do more,” NATO Secretary General Jens Stoltenberg told a press conference this week.

Personally, I hear faint echoes of blackmail in that comment.

Time for a quick reality check: If Moscow was really as aggressive as NATO leaders want us to believe it is, the map around Russia would look radically different right now. Ukraine would be torn apart and Balkanized between no fewer than two autonomous republics, while Georgia, which launched a brazen crack-of-dawn attack on Russian peacekeepers in South Ossetia on August 7, 2008, would be fortunate if it had escaped with nothing less than the lengthy occupation of its territory.

But as things stand, Russia never launched a military invasion of Ukraine, as so many Western experts had predicted it would, and Georgia (free of former President Mikhail Saakashvili, who ordered the attack on Russian positions) remains a free and independent state with steadily improving relations with Russia.

Does that sound remotely like the actions of a country hell bent on restoring empire?

On a side note, I am personally convinced that the West was not only anticipating but desperately hoping that Russia would have jumped at the opportunity of invading Ukraine as the capital Kiev succumbed to Western-backed neo-fascist forces. An invasion by Russian forces would have bogged Moscow down in a protracted conflict that would only have succeeded in destroying Russia’s relations with European countries for a very long time, possibly forever. At the same time, it would have given US-led NATO forces a free hand in deciding Syria’s fate, a fate that the United States has already unilaterally determined – without even a hint of democratic due process – has no place for President Bashar Assad.

The other purported excuse for NATO forces massing on Russia’s Western border is due to Crimea voting to leave Ukraine at the height of the Kiev’s political crisis. Although it is rarely admitted in Western media – many journalists who should know better still describe the annexation as due to an invasion – Russia never employed military force against the peninsula. Today the people of Crimea – in poll after poll – have only positive things to say about their new national status.

President Putin on Friday had strong words regarding NATO’s advance on Russia’s borders under the false pretext of Russian aggression.

“After the ‘Arab Spring’ they have already moved closer to our borders. Why did they need to support the coup in Ukraine”, Putin said at a plenary session at the St. Petersburg International Economic Forum.

The Russian leader believes such actions were taken to justify the existence of the North Atlantic Alliance. “They need an external enemy, an external opponent – or why else would this organization be needed?” he explained.

Monaghan, meanwhile, has taken the position that Russia’s militarization and modernization are “not so much responses to what NATO is currently doing but rather reflections of what would have taken place anyway.” In other words, nothing NATO is doing in Russia’s backyard can explain the Russian military’s actions of late; Russia is militarizing because, well, it’s Russia. This explanation is either willful self-deception or a flat-out lie. Moscow has been warning for years that unless US-led NATO demonstrates that it wants a real partnership, and not just a bunch of hollow statements, the option is nothing less than another arms race to the bottom.

All things considered, Russia made the right move on the global chessboard. Even before Washington showed its hand at the geopolitical poker table, revealing that its calls for cooperation with Russia were nothing but a bad bluff, Moscow had already understood Uncle Sam had cards up his sleeve.

Today, the US military leviathan has grown to such monstrous proportions that it is nearly impossible to say with any certainty how many military bases the United States operates abroad. Journalist Nick Turse reported in 2011 that there’s “one number no American knows and that is the number of overseas US military bases”.

“Today, according to the Pentagon’s published figures, the American flag flies over 750 U.S. military sites in foreign nations and U.S. territories abroad,” Turse wrote. “This figure does not include small foreign sites of less than 10 acres or those that the U.S. military values at less than $10 million.”

Indeed, the Pentagon – which funds through US taxpayer money about 75 percent of NATO expenditures – has become so large and cumbersome that it lost track of $2.3 trillion dollars, former US Secretary of Defense Donald Rumsfeld told reporters on September 10, 2001.

It appears that not only has US-led NATO become a threat to hundreds of sovereign states around the world with its extreme imperial overreach, the very same malignancy that the Roman Empire succumbed to, it has managed to become a threat even to itself.

Today, Russia is not taking any chances with the unpredictable global hegemon, whose list of nations it has invaded grows annually. Indeed, the Russian military is engaged in a “transformation process” at the very same time NATO is pounding on the front door. But instead of throwing open the gates to the Western juggernaut, Russia has hedged its bets on long-term strategy, investing in strong national defense.

And that is an “act of aggression” US-led NATO simply can’t tolerate.

Robert Bridge is an American writer and journalist based in Moscow, Russia. His articles have been featured in many publications, including Russia in Global Affairs, The Moscow Times, Russia Insider and Global Research. Bridge is the author of the book on corporate power, Midnight in the American Empire, which was released in 2013. @Robert_Bridge