Muhammad Ali, who died June 3, 2016 at the age of 74, courageously took a stand against the Vietnam War risking years in prison and giving up millions of dollars in income for principles of peace and justice. He refused to be drafted to fight in Vietnam and was given the maximum sentence of 5 years in prison, stripped of his world heavyweight boxing title, and banned from boxing for nearly 4 years in the prime of his life. His prison sentence was stayed pending appeal.

In his own words, Ali famously stated, “I ain’t got no quarrel with them Viet Cong. No Viet Cong ever called me nigger.” He went on to say: “Why should they ask me to put on a uniform and go 10,000 miles from home and drop bombs and bullets on Brown people in Vietnam while so-called Negro people in Louisville are treated like dogs and denied simple human rights? No, I’m not going 10,000 miles from home to help murder and burn another poor nation simply to continue the domination of white slave masters of the darker people the world over. This is the day when such evils must come to an end… I will not disgrace my religion, my people or myself by becoming a tool to enslave those who are fighting for their own justice, freedom and equality…” 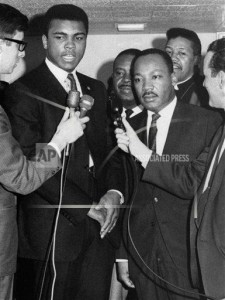 Ali’s brave stance encouraged more resistance to the U.S. war in Vietnam. Eventually consensus on the war changed and the U.S. Supreme Court reversed the decision against Ali in 1971. History has proved Ali and the anti-war movement right but more than 3 million Vietnamese and 58,000 Americans were killed and millions more paid a terrible price along the way. In this present era of endless war, Muhammad Ali’s anti-war stance won’t be celebrated by most people in, or seeking, political power. So it is up to us to carry the torch for justice and peace he passed to us.