Putin: ‘EU Is Russia’s Friend; NATO Is the Problem’ 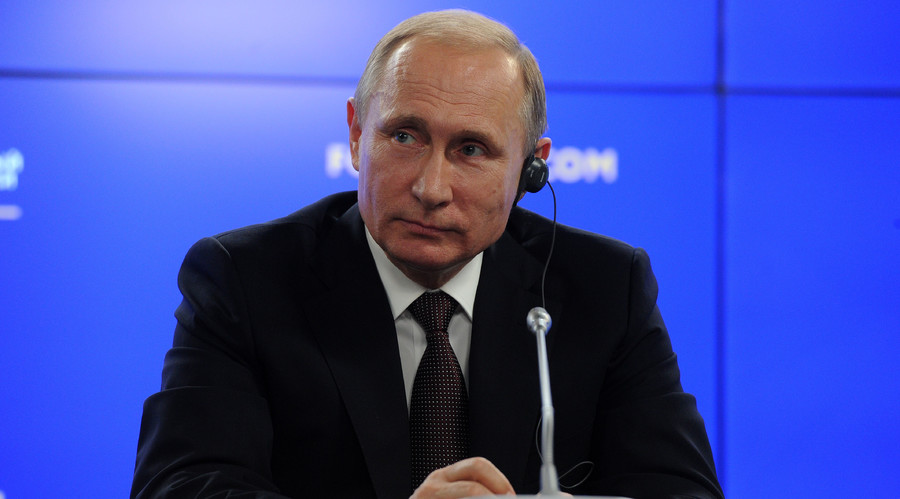 19 Jun 2016 – Vladimir Putin used a keynote address in his home city of St. Petersburg this weekend to outline his belief that America uses NATO to drive a wedge between the EU and Russia. Instead, he offered an alternative vision for European unity.

Jean-Claude Juncker has a dream. The European Union Commission President can see a future where a common European home stretches from the Atlantic Ocean to its Pacific counterpart. This weekend, he told The St. Petersburg International Economic Forum that “for the European Union and Russia, the prize, one day, could be great: a vast region governed by the rule of law, trading freely and working together on common projects.”

In 2010, Vladimir Putin had a similar mental picture. And he took to the pages of Germany’s Süddeutsche Zeitung to announce it. “We propose the creation of a harmonious economic community stretching from Lisbon to Vladivostok,” Putin suggested. “In the future, we could even consider a free trade zone or even more advanced forms of economic integration. The result would be a unified continental market with a capacity worth trillions of euros.”

Now, if you are sitting in Amsterdam, Vienna or Rostov, this makes complete sense. Despite the fact that most of its territory is located in Asia, Russia is a European country. After all, it has given the continent much of its greatest literature and high culture. Moscow is Europe’s largest city and St. Petersburg one of its artistic jewels. Furthermore, Russians are overwhelmingly Christian and European in sensibility and outlook.

However, if you are perched in Washington, all this is your worst nightmare. Make no mistake, there is one thing the US establishment fears more than anything else. That is any form of alliance between, what it perceives as, German-led Europe and Russian-dominated “Eurasia.” So much so that its primary foreign policy focus since the collapse of the Soviet Union has been to prevent it.

Particularly since 2003, when France, Germany and Russia joined forces to oppose America’s illegal invasion of Iraq. That moment, which united continental Europe’s three main powers against US interests, concentrated a lot of minds.

If you think this is “pro-Russia” scaremongering, check out Stratfor, the American intelligence organization, known as the “shadow CIA,” which advises the State Department. Its founder, George Friedman, is on the record as stating that “the primordial interest of the United States over which we have fought wars, the First, Second and Cold Wars, has been the relationship between Germany and Russia, because united they are the only force that could threaten us, and to make sure that that does not happen.”

With this in mind, Washington needed to drive a wedge between Paris, Berlin and Moscow and NATO was its vehicle. Of course, such a policy was nothing new. Back in the 1950’s, NATO’s first Secretary General, Lord Ismay, stated that the purpose of the alliance was “to keep the Russians out, the Americans in, and the Germans down.” Vladimir Putin knows this. That’s why, in St Petersburg, he made it clear that Russia values the EU. The problem, as Moscow sees it, is NATO.

Putin believes that America milked the 2013-14 Kiev Maidan turmoil to justify the existence of NATO. “Why did they need to support the coup in Ukraine? There is a complicated internal political situation there, and the opposition that is in power today would have most likely come to power by democratic means, through elections, as well.” The Russian President thinks that Washington exploited the delicate Ukrainian ethnic balance to place Russia in an impossible situation. “They need an external enemy, an external opponent – or why else would this organization be needed?” he insisted.

Continuing his theme. Putin went on to outline how he believes Washington is manipulating its European partners. The President contended that, through anti-Russia sanctions, the US has pushed the EU into a trade war that is costing Europe billions in lost trade while leaving the U.S. unscathed.

“They’re not bothered at all about these sanctions because they don’t feel any impact at all from our counter-sanctions,” Putin said. “In Europe, they feel the impact, but the U.S. doesn’t feel any impact. There’s no effect. The Americans tell their partners that they need to be patient. Why should they be patient? I don’t understand.”

Nevertheless, Putin acknowledged that America remains the world’s most powerful country. “America is a great power, probably the sole superpower today. We accept that.” But when it comes to the US projecting that power, he shot back: “The world needs a strong country like the United States, but we don’t need it to constantly interfere in our affairs, telling us how to live and interfering in Europe’s attempts to strengthen ties with us.”

A Europe, Whole and Free?

In fairness, it’s not only nefarious American meddling blocking an EU-Russian alliance. There are also ideological differences. Putin and those Eurocrats who believe in greater Europe, independent of the US, share the same broad vision. However, EU officials are adamant that this coalition must take place on their terms, with their understanding of “European values” as the driver. In Putin’s case, he’s thinking more of a free trade area of nation states, all with their own ambitions and ideals.

On sanctions. Putin offered to “meet the EU halfway.” At the same time, he warned that Brussels shouldn’t hold Moscow solely responsible for fulfilling the Minsk agreements on the peace process in Ukraine. “Especially regarding those issues that are beyond our ability,” he explained.

Putin was channeling growing Russian exasperation at the blind eye the West has shown to Kiev’s failure to implement any of the key Minsk protocols.

Juncker’s position on sanctions was less positive. The EU leader made it clear that Russia would remain subject to sanctions until the Minsk deal is fully implemented – apparently regardless of Ukraine’s behavior – and insisted that Moscow’s reabsorption of Crimea in 2014 was “illegitimate.” Italian Prime Minister Matteo Renzi concurred with this.

Renzi and Juncker were among a number of Western bigwigs who showed up in St Petersburg. UN Secretary General Ban Ki-Moon and French opposition leader Nicholas Sarkozy were also present, alongside Nestle Chairman Peter Brabeck-Letmathe, who called for the lifting of trade embargoes. Despite pressure from Washington to boycott the event, Exxon Mobil’s Chief Executive Officer, Rex Tillerson, also came along.

Putin used the event to drive home the message that Russia desires close friendship with the EU. But that Washington’s apparent control of Brussels makes this impossible. On the controversial Transatlantic Trade and Investment Partnership (TTIP) he said: “It is evident that Europe has huge potential but to stake it on only one regional association clearly narrows its possibilities.”

2 Responses to “Putin: ‘EU Is Russia’s Friend; NATO Is the Problem’”