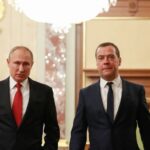 15 Jan, 2020 – A seemingly routine ‘state-of-the-nation’ address by Vladimir Putin unexpectedly turned into one of the most memorable afternoons in recent Russian political history. Today, Russia’s government resigned. Dmitry Medvedev departed the political frontline, Vladimir Putin effectively confirmed he will leave the presidency at the end of his present term, and Mikhail Mishustin became the new Russian prime minister.

Western Reporters in Kiev Continue to Ignore the Rise of Neo-Nazism in Ukraine
Bryan MacDonald – Russia Today, 15 May 2017

Since the 2013 protests in Kiev’s Maidan square there’s been a problem with what Western readers are consuming about Ukraine. The reluctance of Kiev-based hacks (and plenty in Moscow too) to call a neo-Nazi, a neo-Nazi. Instead, we read terms like “nationalists,”“right sector,”“patriots” and “militants.” And it’s rarely explained how these headbangers are the tail wagging the government dog.

20 Mar 2017 – Supporters of NATO believe American, British and German soldiers being sent to Russia’s borders is “defensive.” But the Kremlin’s counter moves are aggressive. This delusion could be dangerous.

The New Yorker made quite a splash with its uber long read on ‘Trump, Putin and the New Cold War.’ What a shame then the actual product is sloppy, misinformed tosh masquerading as something of highbrow distinction.

Understanding the intentions of Russian leaders is easy these days, you just have to listen to what they say. This isn’t understood in the West, where policymakers and the media haven’t moved on from the Cold War and foolishly regard Russia as more mysterious than it is.

Why Has NATO Chosen Russia as Its Enemy Instead of ISIS?
Bryan MacDonald – Russia Today, 18 Jul 2016

14 Jul 2016 – According to statements made at last weekend’s summit in Warsaw, NATO regards Russia as a bigger threat than ISIS. Of course, that’s ludicrous but when you scratch beneath the surface, the use of these falsehoods makes perverted sense.

19 Jun 2016 – Vladimir Putin used a keynote address in his home city of St. Petersburg this weekend to outline his belief that America uses NATO to drive a wedge between the EU and Russia. Instead, he offered an alternative vision for European unity.