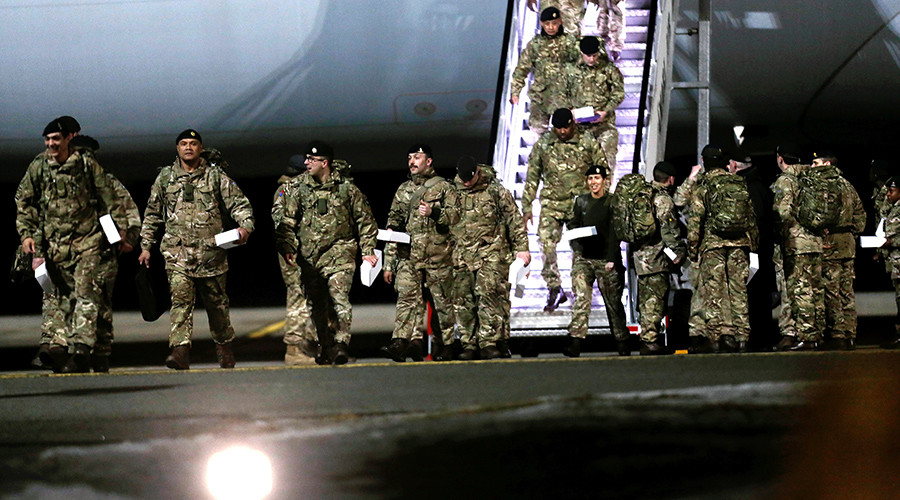 20 Mar 2017 – Supporters of NATO believe American, British and German soldiers being sent to Russia’s borders is “defensive.” But the Kremlin’s counter moves are aggressive. This delusion could be dangerous.

George Bernard Shaw was probably second only to William Shakespeare among English-language dramatists. In 1914, he was one of the most famous people in Europe. The Irishman’s play, Pygmalion, had been a massive success in Berlin, London, and Vienna. As a result, newspapers, and magazines were lining up to publish his journalism.

Until he started to reject the conventional wisdom which presented the nascent war between Britain and Germany as a noble cause, that is. In an interview with the American journalist, Mary Boyle O’Reilly he held the two sides were equally culpable for the conflict, and suggested how “the soldiers should shoot their officers and go home.”

All of a sudden, work dried up, and he found himself blacklisted in the mainstream media. Thus, he used The New Statesman, a new journal in which he held a substantial shareholding, to publish his now legendary “Common Sense about the War.”

His thoughts were mostly prescient. Especially when pointing out how “France and England have to live with Germany after the war, and to cripple Germany by exactions and humiliations would be a serious mistake.” Of course, the failure to heed this warning created the conditions for the rise of Adolf Hitler and an even more dreadful conflict a quarter century later.

The establishment reaction to his polemic was startling in its venom. Herbert Asquith, the Prime Minister’s son, called for Shaw to be shot. Meanwhile, his rival, J. C. Squire wanted him “tarred and feathered.” And H.G. Wells and GK Chesterton publicly shunned him.

The reason for the preamble is to outline how “group think” can lead to the black-balling of even great minds and the famous. It makes people afraid to stick their head above the parapet, even when they know their conviction to be true. We are seeing it today in Western hysteria about Russia and continuing silence as NATO marches ever close to the country’s frontiers.

Especially this weekend, as cheerleaders for the Western military club celebrated the deployment of British soldiers to Estonia, far from their homeland. The move follows a German placement to Lithuania and America stationing troops in Latvia.

The London media greeted the move with suitably aggressive headlines. The Independent went “First of 800 UK troops arrive in Estonia to face off against Putin as part of NATO show of strength.” The Mirror splashed: “British troops join showdown against Vladimir Putin as they travel to the frontline in Russia.”

Yet, despite this jingoism, the US-led club describes all this as a defensive move. Which Moscow, given it employs consular staff who study the UK press reaction and rhetoric of its political class, increasingly finds hard to believe. So, the mood in the Kremlin has, somewhat justifiably, shifted to sense a provocation.

Thus, it was hardly a huge surprise when the German spy chief, Bruno Kahl, announced that Russia had apparently doubled its military presence on its Western border. Students of Russian history were especially aware of its people’s paranoia about attacks from that direction. Information surely known to Western governments, unless their diplomats are fast asleep in Moscow.

But what was astonishing was NATO’s response. Der Spiegel reported how Kahl suggested that Russia’s alleged move “can’t be seen as defensive.”

Breaking: German intel chief tells @DerSPIEGEL that Russia has doubled military on western border. "Threat is up, can't be seen as defense."

So, let’s get this straight. According to NATO logic, Russia’s reinforcement of its frontiers, following an American-British-German deployment right up against them is construed to be an act of pugnacity. However, the original stationing of these foreign troops is supposed to be entirely benign? It seems this is a classic example of what happens when propaganda goes too far.

Moscow let the Baltics go more than twenty-five years ago, and since then acquiesced to their assimilation into both the European Union and NATO. Indeed, there were no attempts at all to scupper their plans by military means. Furthermore, the Kremlin has given repeated assurances of how it has no interest in invading these states.

Nevertheless, Western media – and the think tank racket – have conducted a relentless messaging offensive in recent years, suggesting that Putin covets these territories. But nobody is ever able to give a convincing reason for why Moscow would risk nuclear annihilation to acquire three countries which have defensive guarantees from the United States. And for what? There are no valuable resources to exploit, just a small, and ever dwindling, population – the majority of which is extremely hostile to Russia.

The current situation seems to be a sort of self-fulfilling prophecy. Constant media promotion of the “Russia will invade the Baltics” line has forced politicians – most of whom have very little knowledge of the region – to be seen to do something. At the same time, local leaders benefit electorally by using the “Russian threat” to distract from their own ineptitude as the Baltic economies struggle and corruption remains rife.

Read more: German soldiers to remain in Baltics ‘as long as needed’ – FM

For its part, Moscow has publicly voiced its concern, especially given it “has no information about how and when the build-up will end,” according to Deputy Foreign Minister Aleksey Meshkov. “And who said that it will end with this?… for the first time since World War Two we see German soldiers along our borders.” That last line is worth repeating a few times because Berlin sending troops to Russia’s frontier is like a red rag to a bull.

Relentless agitprop has led us to this point where Western soldiers are right up against Russia, and Moscow has been forced to answer the challenge, even if only to placate domestic opinion, which is understandably concerned.

The whole affair is nonsensical. And of no benefit to either side. Indeed, you can be pretty confident that if Shaw were around now, he’d call for the Western soldiers involved to shoot their officers and go home. Additionally, you can be equally sure of how the Herbert Asquith’s and J.C. Squire’s of today, would insist he be “ostracized.” After all, we’ve already heard that sort of toxic language directed at this very network.